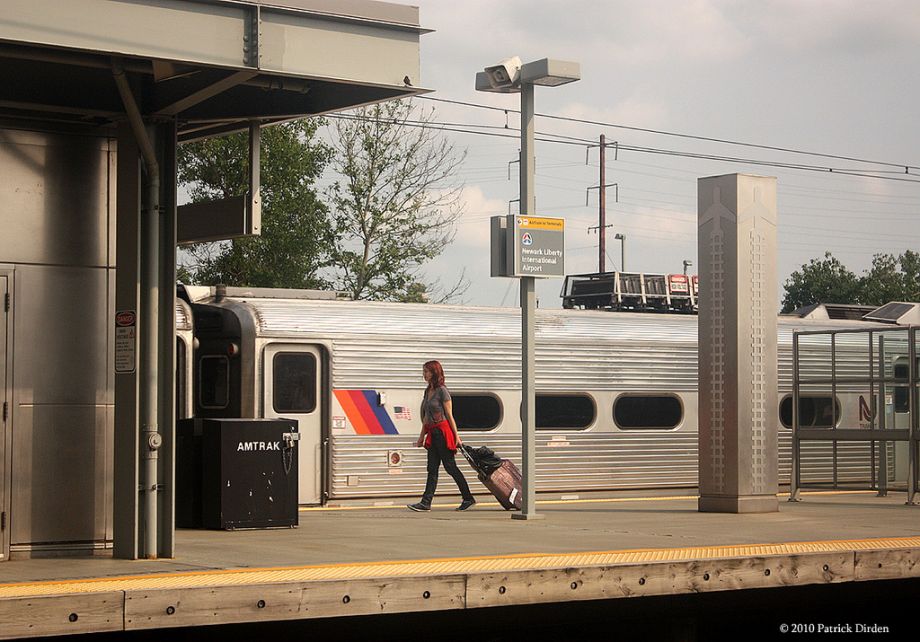 The train that already goes to the airport. Credit: Patrick Dirden on Flickr

New Jersey Gov. Chris Christie has never exactly been known for his rail advocacy. Transit boosters in his home state and New York, for instance, are still smarting from his cancellation of the ARC tunnel beneath the Hudson River, without proposing any alternatives.

So it was surprising last month when Crain’s reported that Christie was about to throw his weight behind an extension of the PATH subway, which connects Manhattan with some of North Jersey’s densest cities and Newark Liberty International Airport.

As it turns out, there was more to the story than that. Christie actually appears more interested in luring United Airlines to the struggling Atlantic City International (in name only) Airport, the Wall Street Journal reported Sunday night. The proposed extension of the PATH train to the airport — well, to an elevated people mover that would take you to the airport — was what he wanted to give to United in exchange.

The deal hasn’t been consummated, and it’s possible that it never will. As one aviation consultant pointed out to the Journal, United has already maxed out its capacity at Newark Liberty, so it’s not clear what the airline would gain from the trade.

But even the suggestion illustrates a number of worrying trends at the Port Authority, and in American transit planning writ large.

The first is simply that the authority, once a beacon of political independence with its dedicated toll revenues and lack of direct taxpayer funding, has become a pawn in political horse trading by New York and New Jersey governors. Projects are dreamed up by politicians and justified by the technocratic rank-and-file, rather than the other way around.

Another worrisome aspect of the proposal is the cost escalation. As late as last year, the project to bridge the not even three-mile gap between the PATH’s current terminus in downtown Newark and the airport was estimated to cost $600 million. Today, the latest rumors peg the price tag at at least $1 billion. (To bring it directly to the terminals, giving New Yorkers a true one-seat ride without having to transfer to the AirTrain people mover, would raise the cost to above $3 billion.)

But there’s also an issue that extends far beyond the Port Authority and the New York region: Airport transit projects are often given funding and levels of design out of proportion with their ridership and impact.

While airports are often large job centers, projects to connect them to transit — often rail, and often in quite elaborate and expensive ways — cannot be justified on the basis of ridership alone. Instead, business groups push them as a way to lure the cream of the global crop.

Office landlords in downtown New York, especially, have been relentless in stumping for better transit connections to regional airports, hoping to revive the Financial District as a center of business and reverse its century-long decline in favor of Midtown. The proposed PATH extension would offer the neighborhood a direct connection to the airport’s AirTrain station, from the station (itself the subject of much controversy) at the World Trade Center.

While many would cheer funding for any public transportation project, some — including former Port Authority employees, albeit anonymously — question whether this particular project would be the best use of scarce funds.

Newark Liberty is already arguably the best-connected of the region’s notoriously disconnected airports. New Jersey Transit offers a 25-minute train ride to an AirTrain people mover at the airport from New York’s Pennsylvania Station, a much more central location than the World Trade Center. It also offers bus service from the Port Authority Bus Terminal at night.

But anyone who’s ever ridden NJ Transit to the airport knows its shortcomings. The trains are relatively infrequent, especially off-peak (if your flight arrives at 8:15pm on a Sunday, you’ll have to air until 9:04pm for a train to Manhattan), and nonexistent late at night. The PATH train, on the other hand, arrives with subway-like frequency and runs 24 hours a day.

But none of those conditions are immutable, especially if $1 billion — or even a small fraction of that sum — were made available to NJ Transit to help ease access to the airport.

“You always have less money than you need for all the projects you have,” said one former regional planner who has worked on cross-Hudson transit. “If you can do anything in this region without having to build, you should do it first.”

“You’ve got to look at all the alternatives,” he added. “And given that you have a lot of other options, you could run buses once a minute for 30 years for the $1 billion,” not to mention the possibility of more frequent NJ Transit rail service. “It would be critical.”

One competing project is a long-planned new rail tunnel beneath the Hudson River, adding redundancy to a single pair of century-old tubes that carry all NJ Transit and Amtrak trains (including the existing service to Newark’s airport) between New Jersey and New York. A billion dollars, the projected cost of the PATH extension, wouldn’t pay for a new set of tunnels and station infrastructure, whose costs Amtrak estimates would top $15 billion, but it would be a sizable downpayment for a project that fulfills regional needs, and could use all the funding help it can get. (NJ Transit could also use a new pair of cross-Hudson tunnels to run more trains to the airport.)

One former Port Authority staffer suggested replacing the airport’s AirTrain people mover, which may be due anyway. It could be extended to downtown Newark to meet the existing PATH terminal and other transit connections.

“Ten-car PATH trains provide appropriate capacity from the World Trade Center to [downtown] Newark,” he wrote in an email. “However extending the run to the airport, they would be very underutilized and expensive to operate with a two-person crew.”

If the project does go forward, it wouldn’t be the first questionable airport transit extension to advance in a region with greater needs.

The Bay Area, for example, has had two in recent years.

The first was a branch of the BART to San Francisco International Airport, where many transit advocates thought an automated people mover would be a better fit, as it would also serve the nearby Caltrain station and at a much lower price.

The critics were right. Ridership to the airport fell well short of expectations, the local transit agency had a hole unexpectedly blown in its operating budget, existing BART service suffered due to the branching, and any future high-speed rail project will never be able to properly connect to the airport.

More recently, Oakland International Airport was given a $500 million elevated people mover when surface transit would have sufficed for its relatively small traffic volumes.

“When you’ve got the business community complaining about airport access, politicians pay attention,” said one retired New York regional planner. “But when you’ve got a bunch of schmoes on Staten Island complaining [about poor transit], nobody listens to them.”