As a North Jersey Farmers Market Goes Virtual, It Finds a New Kind of Community – Next City

As a North Jersey Farmers Market Goes Virtual, It Finds a New Kind of Community 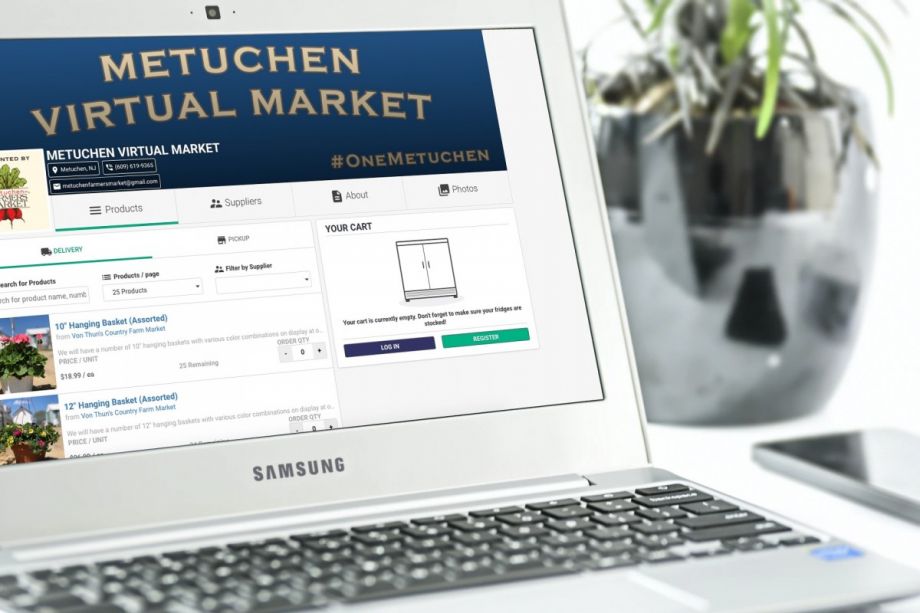 In early March, the board of volunteers behind the Metuchen Farmers Market in Metuchen, New Jersey, held a meeting to address a dilemma: How could they hold their indoor winter market, set for later that month, while complying with newly mandated social distancing rules?

Cancelling the event — and future events — wasn’t an option. The market is essential to keeping local farmers’ businesses afloat. And of course, residents need the fresh produce, poultry and dairy on offer — now more than ever.

The answer, the board concluded, was to launch a virtual version of the market.

“That’s when I jumped headfirst into researching online platforms for doing this, to emulate a market,” Nelson Li, the market manager, says.

Metuchen is a town of 13,000 located in Middlesex County, around 33 miles southwest of Manhattan. Many of its residents commute to work in the city.

Before the pandemic, the farmers market was a treasured gathering space for the community — an opportunity to hear live music, catch up with neighbors, stop by tables set up by nonprofits, and of course, connect with and buy from local farmers.

But in the age of COVID-19, gathering isn’t an option. So, after searching for online alternatives, Li landed on Local Line, a Canada-based platform that facilitates online sales for farmers and other food vendors.

“And as it happened, other markets were also thinking about the same thing,” Li says. “We all chose the same platform for the same reasons. It’s already established. It was built for farmers and farmers markets. And it does not charge extra transactions on top of the usual credit cards.”

Now customers of the Metuchen Farmers Market can place their orders online at the site, launched in late March, and pick the items up at a local parking lot every Saturday.

Usually, Metuchen’s winter market opens only once a month from February to May, before the summer’s weekly market picks back up.

But now demand is too high for such an infrequent schedule. The Metuchen Farmers Market has suddenly found itself a viable competitor to grocery stores, many of which are running out of items and struggling to keep up with delivery and pick-up services.

In the first 36 hours of its launch, with only two vendors participating, the site made thousands of dollars in presales.

“There was a lot of eagerness to try this out and to have an alternative to going to the grocery store and mingling with people,” Li says.

Mingling is not an option at Metuchen’s new market. When picking up orders, customers must follow a strict set of protocols to avoid contact and possible contamination.

Under the meticulously planned procedure, people drive to the pick-up site within the 30-minute window assigned to them based on the first letter of their last name. With the car’s windows up, each driver stops in front of the vendor of their choice and holds up a paper with their customer account name to the passenger side window. The vendor then opens the unlocked back door and places the purchased items on the back seat.

Li says the operation has worked smoothly so far. It even has the endorsement of Metuchen’s mayor, Jonathan Busch.

“Just returned from picking up some earth booty from the perfectly synchronized, no contact, and volunteer run [Metuchen Farmers Market]” Busch tweeted, along with a photo of his produce.

While the market usually boasts more than 15 vendors, only four suppliers are currently listed on the site. But more farmers join every day as they work out the kinks in transferring their inventory online and connecting their payment procedure to the online system.

To help with that process, Li reached out to Jason Delia, a software engineer who set up the farmers market’s website years ago.

Delia, who also serves on the town council, sent out a call to other tech-savvy Metuchen residents, and plenty jumped at the opportunity to help. Li formed a team of 12 “buddies” to work one-on-one with participating vendors. The volunteers use a chat room, set up by Li, to help farmers navigate getting set up on the online platform.

“We have such a vibrant volunteering community in town,” Delia says. “So when I put that call out, we ended up having more people volunteer to help than we actually had farmers. That’s just quintessential Metuchen for you.”

According to Delia, that buddy system is helping to restore the socialization that was lost when the in-person market shut down, by connecting Metuchen residents with farmers they may not have met otherwise. And Li says customers are also expressing their support for the market on social media, posting pictures of their produce purchases.

“It’s a pale imitation of a community,” he says. “It’s not the same as going to your town plaza to meet with your friends, but it’s a way where people are sharing opinions and enthusiasm.”

Not all farmers markets in the state are going completely virtual. Denville Farmers Market in Morris County is also using Local Line to provide optional pre-ordering. But, as a state-mandated essential business, the market will operate as usual, with customers permitted to browse in-person.

“I’m really grateful for all the shoppers who thanked us,” Liisi Lascaro, founder and manager of the market, says. “They said they feel much better doing the shopping in the open air, rather than going into the stores.”

According to Lascaro, the market has even attracted out-of-towners who don’t have a local farmers market but are turning away from crowded and understocked grocery stores.

“So in a different aspect, it’s widening the community of farmers market shoppers,” she says.

Liisi thinks that pre-ordering will continue long after the pandemic blows over.

“When you shop at the farmers market, you know that there are certain items that will be sold out in the morning,” she says. “Let’s say you know you always go for that specific arugula, then you have this opportunity to actually preorder it. So it’s definitely a good option and an option that we’ll continue to use.”

And though Li can’t say for sure whether Metuchen’s Farmers Market will maintain its new online presence, he does think the system has its merits beyond social distancing.

“A virtual market brings everything together in an organized fashion,” he says. “It has an inventory that the farmer maintains. So every time someone orders something, the inventory level automatically goes down. And it sends an email if it gets down to a certain point. It helps the farmer track what’s going on automatically.”

Li thinks that the virtual market’s success is an indication that more people are recognizing the merits of buying food locally — a lesson he hopes they’ll remember in a post-COVID-19 world.

“The chain is very short, the food is better and you know your farmer,” he says. “It’s gonna change people’s awareness of how they get their food, and their appreciation for it.”