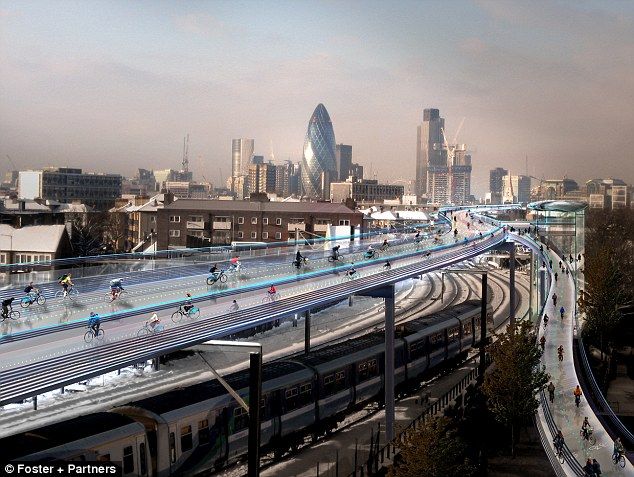 Norman Foster is a giant among architects, and nowhere is his influence felt more than London. His projects litter central London – he designed the Millennium Bridge, the Gherkin office tower and City Hall – and can be found everywhere from Midtown Manhattan to Germany’s Reichstag building to the tallest bridge on the planet.

But he is also a potent reminder that great architectural prowess lends you no special infrastructure planning skill. Foster + Partners’s proposed Thames Estuary mega-mega-project – rail, flood barrier, airport and hydropower plant all rolled into one, garnished with a side of environmental mitigation – got rave reviews and sparked a series of government reports, but was wildly impractical. The plan was out of proportion with the public’s appetite for infrastructure projects, and had some questionable priorities. A polluting airport was the crown jewel, and the rail line next to the M25 orbital motorway would’ve crowded out more established and rational regional transit priorities.

And now Lord Foster is at it again: on Dec. 30 his firm unveiled SkyCycle, an elevated bikeway concept put forward in conjunction with London landscape architects Exterior Architecture and design consultancy Space Syntax. The 135-mile network of raised bike paths would sit three stories above the street level, snaking through the city. The team didn’t dare put a price tag on the whole project, but an initial four-mile starter line from east London to Liverpool Street Station would clock in at £220 million, or more than $360 million.

The idea is problematic, to say the least.

First there are the logistics. Three stories is pretty high up, and would take a lot of pedal power to scale. The “developers” (not that they’re trying to foot the bill or anything) tell the Daily Mail that “that London’s railway lines were originally built for steam trains and as a result [SkyCycle would] follow contours that naturally reduce the amount of energy expended and avoid steep gradients,” which seems like not quite enough of an explanation of how they intend to gently ascend and descend 30 feet at every entrance, which would be placed every half-mile or so.

Then there’s the cost. One of the great things about bike infrastructure it’s very cheap. On the low end it’s just paint, and on the high end it’s a narrow strip of concrete – far cheaper than construction-heavy new roads and rail lines.

But this is not the case with SkyCycle, which involves building expensive new elevated structures rather than cheap paint and a tiny bit of concrete. For the amount that the team wants someone to spend on four miles of new SkyCycle track, the city could easily build four miles of new light rail that serves far more people.

And finally, there’s the question of utility to cyclists. Sure, it would be better than nothing, but nothing is not the alternative – a comprehensive network of on-street bike infrastructure is. Normal bike lanes on existing streets don’t require any special deviations outside the normal street grid for travelers (no need to go out of your way to find a “station” on a relatively sparse elevated network, and then up 30 feet to get to it), and can be rolled out on a much larger scale.

The biggest problem with SkyCycle, though, that the scheme implicitly acknowledges the continued dominance of London’s streets by cars. Rather than challenge drivers over scare (though no scarcer than in other cities that have built out extensive on-street bike networks) street space, cyclists are shunted up expensive, inconvenient structures atop rail lines. Sure, cyclists would prefer, all else equal, to be totally separated from cars and street traffic, but all else (cost, cycling effort) is not equal, and the idea comes off more as an attempt to help cars by keeping the cyclists away, not the other way around. If this is the best it can come up with – if drivers won’t sacrifice anything for better cycling infrastrucutre – then London is not really committed to dealing with its cycling safety problem.

Architects will always be involved in infrastructure projects, but as Lord Foster’s whacky designs for London show, they’re a poor substitute for transportation planners.