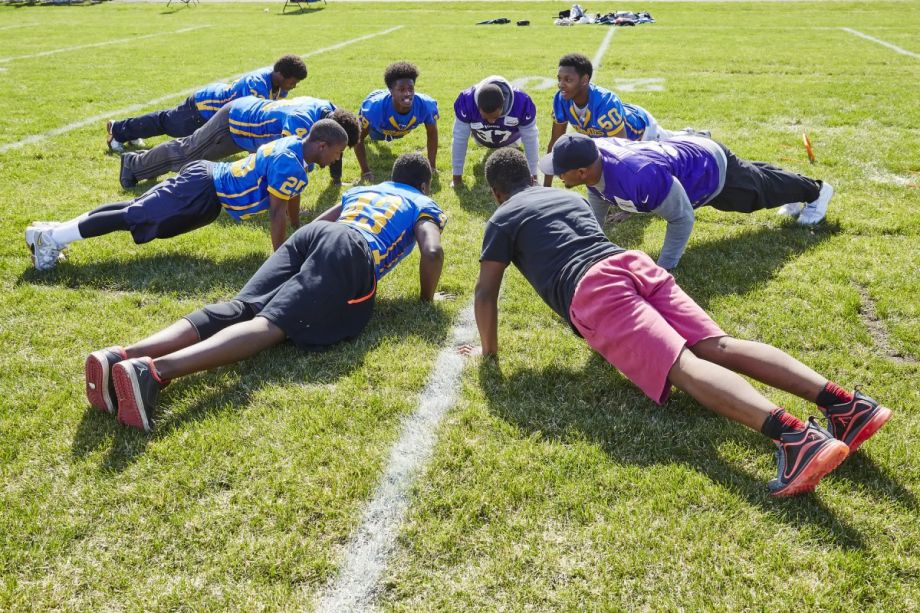 High school football players warm up on a renovated field in the Twin Cities.

Long before he became mayor of Saint Paul, Minnesota, Melvin Carter was one of the many kids who spent countless hours on the Jimmy Lee field in the city’s Rondo neighborhood. He has fond memories of that time — of sprinting across the turf, of friendships that grew out of teams and pickup games, and of gaining the kind of education that only sports can bring. These days, some 20 years since he was a teenager booting a ball across Jimmy Lee field, he still stops by to watch his own children play there and drink in that feeling of being part of the community.

“Young people enrolled in parks programs like the one at Jimmy Lee gain some of their most important life lessons on these fields, like hard work, leadership, trust, and caring for others,” says Mayor Carter, a fourth-generation St. Paul resident who was sworn in as the city’s first African-American mayor in January. “That’s true for me and thousands of our youth, parents, and neighbors who have deep connections to places like Jimmy Lee.”

Constant use, however, has meant constant wear and tear. So in 2012, through a collaboration between the Local Initiatives Support Corp. (LISC), and the NFL Foundation’s Grassroots Program, as well as the city of Saint Paul and a local community group, the original field where Carter played was refurbished. It sits right in the heart of Vikings country, where the Super Bowl will be held this year and where generations of young people have tended their own dreams of playing in the big leagues.

Today, the Jimmy Lee field is a highly visible, much-loved resource within its community. From the city’s main highway, drivers get a clear view kids of all ages playing football or soccer, with parents and friends cheering them on from the edges of a luxurious stretch of green.

“Having such a high-quality field increases equitable access for the city as a whole,” says Andy Rodriguez, recreation program supervisor for the city’s Department of Parks and Recreation. “This has become a premiere location that is heavily used. It’s a huge asset to that community and has made a huge difference in what we can offer and how neighbors come together.”

A youth band performs at the re-opening of the Jimmy Lee field in St. Paul.

With $1.6 million from the Minnesota Vikings, the NFL Foundation and LISC have teamed up to create or refurbish 10 fields in Minnesota, including Jimmy Lee and eight others in the Twin Cities, as well as one in Duluth.

For their part, this year’s Super Bowl contenders, the Philadelphia Eagles and the New England Patriots, have helped fund restoration of a total of 23 community fields in their hometowns through the program with LISC.

These partnerships are essential to getting projects like the Jimmy Lee field completed, says Lester Bagley, executive vice president of public affairs for the Minnesota Vikings.

“The collaboration has resulted in so many safe places for kids to play, and we’ve been fortunate to work with community leaders and advocates for this effort,” says Bagley.

Nationwide, the program has committed more than $46 million to support more than 350 fields in 100 cities — all areas where NFL teams have a home base. Fields are newly built or significantly renovated, with improvements including irrigation systems, lights, bleachers, scoreboards, goal posts and turf. And, each field is an example of the kind of commitment to neighborhood revitalization and community wellness that is part of LISC’s mission to close the opportunity gap.

“Not only do sports offer young people a sense of belonging, they also foster mutual respect and cooperation,” says LISC CEO Maurice Jones, who was himself once a quarterback on his high school football team in rural Virginia. “The skills that youth develop through competition are part of a well-rounded upbringing that all parents in every community want for their children.”

In addition to its 20-year partnership with the NFL Foundation, LISC promotes youth development in its 31 urban offices and in its national rural program through collaborations with ESPN and Under Armour.

In St. Paul, the Jimmy Lee field is part of a recreation center that was originally built in 1969, replacing a small warming shack next to a grass playing field. Although residents used the fields for decades — sometimes even driving across it — it often got muddy and scuffed up, making it difficult to play on. This was challenging not just for the neighborhood children but also for players at Central High School, who used the field for football practices.

Through LISC’s Twin Cities connections, the NFL Foundation’s Grassroots Program helped fund this local project, which included construction of a new synthetic turf football field to go along with other improvements that encompassed baseball and softball fields, a children’s play area, a new parking lot, landscaping and lighting, as well as significant redevelopment of the community center.

Since then, LISC has also worked on the Vikings home turf to build or redevelop fields like the recently opened Como Park Senior High field, which had never been able to host a varsity football game until its renovation.

Research has shown that when investments are made in fields like Jimmy Lee, Como Park Senior High, and other safe places to play, greater health and achievement results. A report from the Robert Wood Johnson Foundation noted that activity-focused spaces in neighborhoods matter when it comes to better mental health, violence prevention, lowering the risk factors for chronic disease, higher graduation rates, more cooperation among neighbors, and other benefits.

“Even though these projects have definite outcomes for physical places, it’s the way they affect people’s lives that is really inspiring,” says Andriana Abariotes, executive director of LISC Twin Cities.

A few years ago, the Jimmy Lee field was renamed to honor Stacy Robinson, an NFL player who died in 2012, and had grown up in the neighborhood. Bill Peterson, who worked as a manager and coach for 25 years at the community center that includes the Jimmy Lee field, recalls 10-year-old Robinson working hard to learn football, then for years after often stopping by to visit the field, even as he rose as a star player in the NFL.

Peterson also recalls other sports greats like Joe Mauer, Dave Winfield, Carl Eller, and Paul Molitor spending hours on the field and in the rec center, starting their paths toward sports careers. But even those who played for just a few seasons as kids and teens were memorable, says Peterson, because they all showed such passion and drive, and a love for sports. The field has also been a gathering place, he adds, with families picnicking along the sidelines, and special events drawing neighbors from across St. Paul.

“The impact that field has had, not just to those who live there but for everyone in the city, has been tremendous,” Peterson says. “It’s a resource that keeps on giving, and brings the community together in a meaningful and beautiful way.”

Elizabeth Millard is a Minnesota-based freelance journalist who specializes in health, fitness, and community-centered projects.