Houston Gets a Transit-Oriented Development Spark – Next City

Houston Gets a Transit-Oriented Development Spark 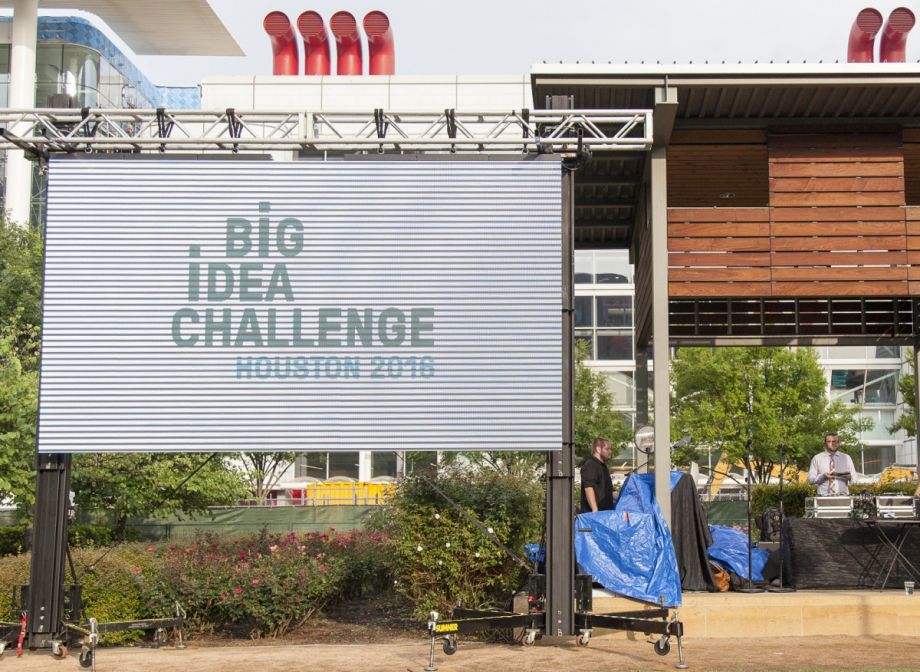 During Next City's 2016 Vanguard conference in Houston, winners of the Big Idea Challenge proposed invigorating a slice of unused land across from a light-rail station. (Photos by David A. Brown)

In recent years, Houston has been straining against its reputation as a car-crazy city and rethinking neighborhood connectivity. The big Houston transportation story of 2014 was the opening of three new light-rail lines, expanding on the success of the original Red Line through downtown to reach out to the East End, Southeast and Near Northside. In 2015, the overnight overhaul of Houston’s entire bus system to better connect outer neighborhoods — without going through downtown — lapped up headlines. This year, the completion of the Houston Bike Plan could start the process of making cycling safer and more complementary with bus and rail commutes.

Last week, 45 young urban leaders from around the world saw this evolution-in-progress firsthand. They were selected to attend Next City’s annual Vanguard conference, which brings a new group of changemakers to a different city every year. What stays the same: the Big Idea Challenge. As at past conferences in Reno and Chattanooga, the Vanguards split into teams to create a winning proposal around a specific theme. In Houston, the 2016 Vanguard class looked at five underutilized properties (find full descriptions here) to consider ideas for making them useful to nearby residents. Each of the five teams talked with stakeholders to better understand the needs of the surrounding neighborhood. After a site visit and two days of brainstorming, the teams publicly presented their visions at Houston’s Discovery Green park on Friday night. Rice University’s Kinder Institute for Urban Research, which hosted the Vanguard conference, and Next City will work together to implement their idea with the support of a $10,000 grant from Kinder.

Each of the five sites, located in neighborhoods across the city and in varying states of disuse or disrepair, presented its own problems. One team was tasked with activating the space around the historic Rufus Cage Elementary School in the East End neighborhood, a food desert with a dearth of green space and informal education opportunities. Another focused on a green space that has deep significance to the adjacent SHAPE Community Center but is in need of a more cohesive design and better connections to both the surrounding streets and the African-American cultural center next door.

After the presentations, the judges named the “Little Oasis” plan as the winner. That team had been charged with coming up with an idea for a 2,400-square-foot wedge of land on the Near Northside that had been used to store equipment during the light-rail expansion.

“We were actually skeptical going to such a small piece of land,” says Vanguard Rohit Malhotra, executive director of Atlanta’s Center for Civic Innovation and member of the winning team. But when the group met with City Council Member Karla Cisneros, who represents the district in which the plot is located, “her passion [for this small piece of land] was pretty contagious,” says Malhotra. “She talked about it as part of something so much bigger.”

In fact, Cisneros says making light-rail stations more pedestrian friendly and better integrated into their neighborhoods was one of her priorities when she joined the council in January. “The stations are nice, you get off, but then what? They don’t connect to the neighborhoods at all,” says Cisneros.

To link them, she’s been eyeing the vacant parcels leftover from the expansion that dot the Red, Green and Purple lines like “pearls on a necklace,” says Cisneros. The Metropolitan Transit Authority of Harris County is looking to sell many of them to recoup construction costs, but some are too small or oddly shaped to be practical for development. The winning Vanguard team’s design imagined the one at Fulton Street as a portal to the surrounding neighborhood, a place to wait for the light rail, hang out, and store and work on bikes. Dubbed the North Lindale Oasis Pequeno, or Little Oasis, their proposal calls for installing a lit, shaded structure with seating, bike racks and a bike repair station. Their idea took into account the Houston Bike Plan, which is intended to improve safety, access and ridership, and is slated to be solidified this spring. Cisneros’ constituents have already given their input.

Of their strategy, Malhotra says the group agreed to stick to the quick, cheap and feasible. “Let’s not go after big dreams here,” he says. “You’ve got a community that’s already engaged, you’ve got plans that are already made, and a council member that’s ready to go and just doesn’t have the cash to do it.”

Cisneros is thrilled with the plan. While the design is modest, she has a bigger vision, hoping it will influence how other leftover parcels along the transit line will be developed.

The team tasked with improving the land around the Rufus Cage school proposed creating a living laboratory of the parking lot, with space for urban farming and a temporary, flexible classroom. Their design, called the East End S.T.E.A.M. Station, would allow the community to test uses on the space before committing to building anything permanent or engaging in a costly renovation of the building.

For another design also centered around a school, a Vanguard team proposed striping a vacant lot to serve as fields for use by the middle and high school, creating a better practice environment for Southwest School’s championship-winning soccer and volleyball teams.

Another design, called Lyons Pride, would have cleared a vacant lot on Lyons Avenue in the Fifth Ward as a space for pop-up retail and art installations, upcycling discarded tires and other refuse on the lot as part of the design.

The Lyons Pride plan would clear a vacant lot in the Fifth Ward as a space for pop-up retail and art installations.

The group assigned to the green space near SHAPE Community Center redefined the “big idea” of the challenge: They proposed that instead of using the $10,000 to fund a design created by outsiders, the money should be used by the community itself to engage in a public conversation about redevelopment, in collaboration with the Kinder Institute, Houston Parks and Recreation and the community center.

Many of the designs stressed the importance of responding to local needs.

“A lot of times you think you have to go big picture and it has to change the world, but truth is it just has to engage the community, which means listening to them,” says Malhotra. “The coolest part about community engagement is when you can show community something tangible and visible as a result of their voice, instead of like ‘Yeah, we heard you, but we still did whatever we felt like.’”