In Reno, Public Art Goes Along With Complete Streets Makeover – Next City

In Reno, Public Art Goes Along With Complete Streets Makeover 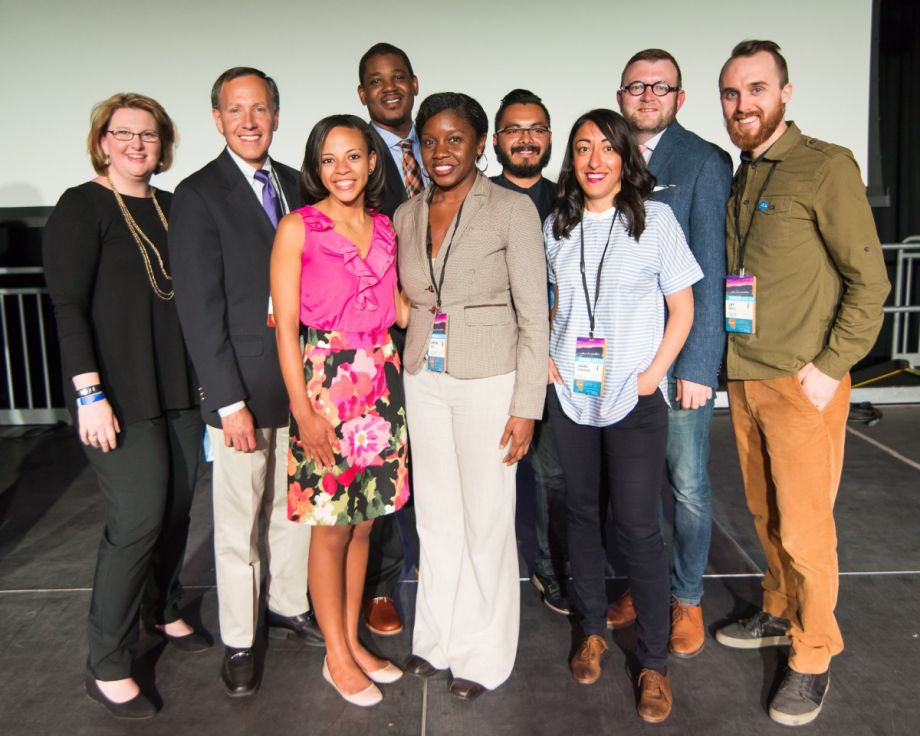 Tactical urbanism may be a recently coined trend, but temporary interventions in the built environment go back decades in Reno, Nevada. In fact, a pivotal moment in the city’s development was a quick-acting project: On July 4, 1910, 22,000 spectators crowded into a temporary stadium — built in only two weeks — to watch James Jeffries fight Jack Johnson in the “Fight of the Century.”

Over a 100 years later, Next City’s “Big Idea Challenge” — held in conjunction with the annual Vanguard conference — may not have quite the same impact as that boxing match did, but its sponsors and participants are hoping that it will give the growing, ambitious city a substantial boost. And the Challenge, a competition designed for the 55 young leaders who were invited to attend the conference in Reno, envisioned something arguably more imaginative — and more influential — than a prize fight.

Since recovering from the recession, Reno’s business and civic communities have worked hard to create a new spirit of optimism and a new startup economy in a city that has had many booms and busts. The six teams of eight to 10 Vanguards were challenged with using the principles of tactical urbanism — small-scale, low-impact, low-cost interventions — to try to nudge Reno forward even more and, possibly, to inspire incremental long-term changes. The teams were meant to work within a budget of $10,000. (That’s the amount put up by Challenge sponsors, the City of Reno, Nightingale Family Foundation, Dermody Properties and United Construction.)

Thinking about tactical urbanism led to “a really interesting process around trying to understand how we do something with integrity,” says Vanguard Zahra Ebrahim, a principal with archiTEXT in Toronto.

Teams spent a day and a half getting to know Reno and checking out three “opportunity sites”: City Plaza, an underused expanse of concrete along the Truckee River; the emerging commercial corridor of east Fourth Street that was once part of the transcontinental Lincoln Highway; and The Lids, a linear park built to cover the railroad tracks that run through downtown. Projects were judged according to four criteria: creativity, feasibility, financial viability and overall presentation.

The winning team, Victory Way, called for a series of public art projects along Fourth Street, a corridor that’s set to get a complete streets renovation soon, with better bus service, improved walkability and bike lanes. The team proposed that local businesses and organizations “adopt” the street’s utility poles — which will be removed in the transit makeover— and decorate them for a period of time. The project would culminate in a street festival in which the poles would be burned in a community bonfire. The proposal was inspired in part by the annual Burning Man festival, which takes place in the nearby Black Rock Desert. The proposal’s pyrotechnics mirror the neon displays of downtown Reno’s casinos, just a mile west of the project site.

Tied for the win, the #Supercity team called for a much more subtle program. Playing off Reno’s motto, “The Biggest Little City in the World,” the team suggested inviting locals and visitors alike to leave their mark on the Lids with spray paint and selfies. Spray over a stenciled superlative — templates have choices along the lines of “The [Smart]est Person in Reno,” “The [Happi]est Person in Reno,” — and leave your message on the concrete in a show of civic pride or self-esteem. Then share a pic on social media.

The most daring proposal, which did not finish in the top two, was the construction of an enormous jungle gym/three-dimensional garden dubbed “Mount Mapes” in City Plaza. The “mountain” is a nod to the nearby Sierras while “Mapes” refers to a beloved 1940s hotel-casino that was demolished in 2000. One of the most polished presentations came from the team “At Home on Fourth,” which built a website for the Fourth Street corridor and organized a rooftop garden-planting to take the Big Idea Challenge beyond thought experiment.

While the projects may have reminded some of the participants of graduate school design studios or bid competitions, the Big Idea Challenge is destined to result in real action. Over 200 members of Reno’s civic and business community attended the presentation of ideas in what may have been the city’s largest gathering ever dedicated to the built environment.

“I think when they see the ideas that are borne from the conference, I think they will see that this is the best thing that could have happened to the city,” says jury member Michael Tragash, senior community manager with Yelp.

“It was amazing to have … so much knowledge in one place,” says Reno Vice Mayor and Councilman (and 2015 Vanguard) Oscar Delgado.

However enthusiastic the jury may have been about Victory Way, the audience was treated to colorful, provocative ideas from all six teams. The relationship between audience and presenters caused some anxiety among the teams as they were considering Reno and forming their ideas. Many participants insisted that, as outsiders, they didn’t want to impose recommendations on the community and were loath to make assumptions about a place that many had known for less than 48 hours.

“It was challenging within the time constraints as well as our larger desire to be responsive to the culture we were seeing and making sure that what we were proposing … actually fit with what Reno is and what it wants to do,” says Victory Way team member Zackq Lockrem, principal and director of planning at Asakura Robinson in Austin.

“Reno is very open to a lot of different things,” says Delgado. “Our culture is built on tourism and the local culture as well. We’re very accepting of what else is going on.” Delgado says that he is going to encourage his colleagues on the city council to fund at least one project, or a version thereof, on each site.

“Sometimes you have to step out of your box to see a different perspective,” says jury member Fred Turnier, who is Reno’s community development director. “It’s good for people to come from the outside to give an assessment. To reaffirm what we’re doing well or point out some changes that need to occur.”

Members of Victory Way say they were dedicated to considering all stakeholders, including traditionally marginalized populations.

“When we got to a point where we realized that the intervention had to be an alert or a notification that someone cares about this street, we felt that it was kind of agnostic,” says Ebrahim.

Whether the city and local activists implement one or all of the proposals of the Big Idea Challenge, Reno’s rough edges will not disappear in a puff of smoke. But Vanguards were genuinely enthusiastic about the city, and the feeling from many locals is mutual.

“We’re excited about some of the immediate actionable items that can occur quickly,” says Turnier.

For Vanguards, who hailed from over 30 cities in the U.S., Canada and Mexico, working for a few days in an unfamiliar city with unique needs and quirks is not necessarily at odds with their projects and careers back home.

“It was an opportunity for us to come together and see what’s possible, see challenges, see barriers,” says Vanguard Aliya Smith-Parker, senior associate for Health and Wellness at the National League of Cities in Washington, D.C. “The whole process helps us think through what we need to work through in our own communities.”