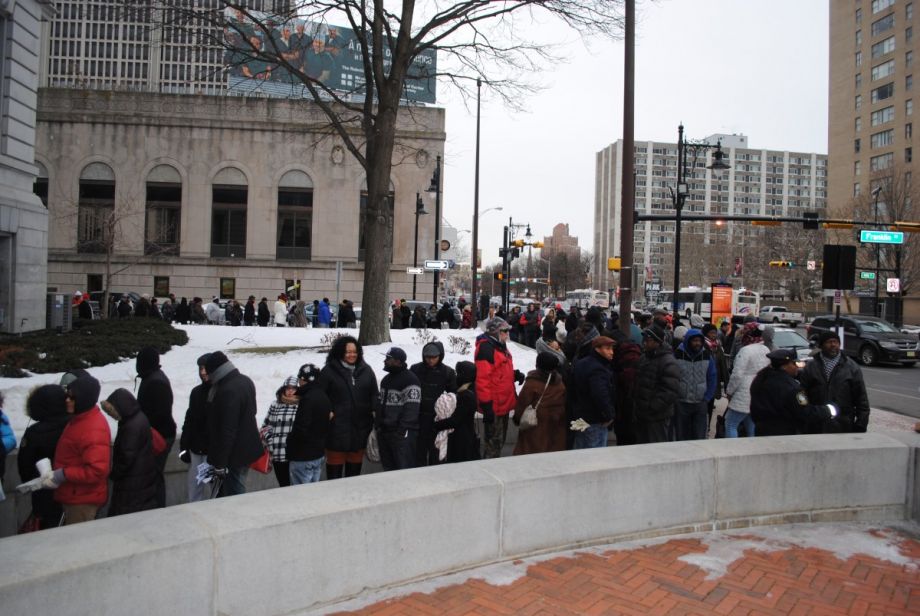 Couples waited outside in 25-degree temps in Newark, New Jersey, on Saturday for the city’s Valentine’s Day sale of vacant lots. (Photo by Cassie Owens)

Malik Wright couldn’t stop pacing in place as he spoke. It was 25 degrees, and he’d been outside of Newark’s City Hall since about 7:30 a.m., waiting for one of the sweetheart lots — Newark’s latest blight reduction tactic, a Valentine’s Day sale of 100 vacant lots to couples for $1,000 a pop.

There were a few rules for the Saturday sale. The couples couldn’t be developers. Buyers must present their plans to the city planning board, and they have 18 months to complete construction. They’re also obligated to live in their new houses for at least five years. Newark’s Valentine’s Day Sale is akin to Detroit and Trenton selling homes for as a low as $1, and mirrors the types of deals for vacants that cities might offer through land banking.

Though the line didn’t open until 7 a.m., and the sale wasn’t set to begin until 9 a.m., some couples arrived in the wee hours (one couple made it in from Brooklyn at 5 o’clock), camping out with tents to ensure a good spot. By 9, hundreds were gathered outside.

Wright’s wife was waiting at home, in Piscataway. “She wasn’t happy to stand in the cold anyway for two hours,” said Wright. “She said, ‘You go, we’ll build it together.’” He lit up as his brother approached the line. Wright forgot his money order; his brother drove 43 minutes to save the day.

Wright, a personal trainer, said if he got a lot, he planned to do much of the work himself.

“When I was little, my uncle would break stuff and tell us to fix it. We’d say, ‘we don’t know how to fix it.’ He’d throw us the Bob Vila book, the do-it-yourself manual, and have us learn.” Since then his brother has become quite the builder, he said. “My bro could build a house from the ground up,” Wright explained. “What I can’t do, he can do.”

Others waiting in line had a similar approach. Maria Castillo’s husband, Teofilo, works in construction. Wemerson Armini Pereira, who was waiting with his wife Rona Venturine, is a welder, and has a dear friend that’s a contractor.

A vacant lot in Newark (Photo by Cassie Owens)

There’s something incredibly American about the dream to build oneself a house from a simple plot of land. The way that Alan Mallach, a senior fellow at the Center for Community Progress and one of the nation’s foremost experts on blight, describes it sounds very American too: “homesteading.” But Mallach is not a fan.

“Homesteading has a really mixed track record, and very limited, frankly, examples of success except when it’s really focusing quite well-to-do families who have that type of financial cushion,” says Mallach, who shares that he and his wife restored their own rowhome in Philadelphia years ago. This variation of homesteading, from a bare lot in a distressed area, he says, is much more complicated. “I’m very handy, I’ve got a decent income, and I know how the construction business works. I wouldn’t touch a vacant lot in an urban neighborhood with a 10-foot pole.”

How much does it cost to build a rowhome from a vacant lot? It varies, but the Garden State Episcopal CDC (which plans to build 15 rowhouses in nearby Jersey City this year and whose director of housing and community development, John Restrepo, echoed many of Mallach’s concerns in an email) is building them at roughly $98 per square foot, or more than $175,000 for an 1,800-square-foot unit and about $255,000 for a 2,600-square-foot one. Mallach wonders how struggling families, even if the costs were as low as $60,000 or $100,000, could finance such an endeavor. What if the housing market tilts downward in these wards during construction and the sweethearts wind up with a house that’s worth less than what they paid? What if, under financial duress, they are unable to complete the house before the 18-month deadline?

In the latter case, Felipe Luciano, Newark’s director of communications, explains that city will seize the lot, and offer it to next in line. At the land sale, the city wasn’t just offering tickets to the first 100, but taking down the names of the next 100 couples after all of the lots were sold. Should a couple fail, another will have the chance to pick up where they left off.

Even with a number of valentines versed in construction in the queue, the financial heft of such a project wasn’t lost on the people outside. Amid a huddle of folks weighing the insensibility of the purchase, a man warned the line loudly, “If you’re not pre-approved for a loan, forget about it!!”

“I think the city should take a step back and ask themselves, is it financially sound to try to get houses built on these lots today?” Mallach says. “Can it be done without a subsidy? If the answer is yes, and that’s what the city thinks is the best use for these lots, then the city should put together a package working with developers, and banks, and so forth to make it happen, rather than putting it on the backs of couples.”

Luciano, when pressed about affordability, counters, “You know, when there’s a will, there’s a way? When you don’t have the information, and you’ve already committed yourself, you find a way to get the information. We have the bankers downstairs. We’ll provide them with contracting information. All they have to do is ask.” Luciano credits Newark Mayor Ras Baraka entirely for concept. “It sounds ethereal, but it’s substantive. We’re giving people equity. You now own your own home.”

Arnold Cohen, senior policy coordinator at the Housing and Community Development Network of New Jersey, loves the idea. He considers it yet another stripe in the city’s strategy to make itself more viable, but one that “captures the imagination.”

“We need to look at where the strategy’s coming from. This is a strategy to rebuild neighborhoods, not a strategy to house low-income people,” says Cohen. “The city of Newark is working on that also.”

By Saturday afternoon, according to NJ.com, with a great turnout and sales being processed, city officials were ready to claim a victory:

“I think it was great just to get the word out. We’re not like Jersey City trying to be the sixth borough,” said Otis Rolley, the CEO of the Newark Community Economic Development Corporation. “We are a city onto itself. It’s a great place and an affordable place to live. That word went out around the nation.”

Tal Shevah, for one, couldn’t believe his luck. He had arrived at 6 a.m., with his fiancée, Anna, baby, and mother, Maria Font. He got ticket No. 6, and was able to score his third choice lot. Font, who was No. 20, got a lot too. Shevah, the owner of two tire shops, said the bankers on the premises told him things look good. “We’re going to go see a builder, and go to the bank. I don’t think there’s going to be anything to worried about,” he said, all smiles. Font couldn’t stop grinning either: “I can see myself living in the new house already.”