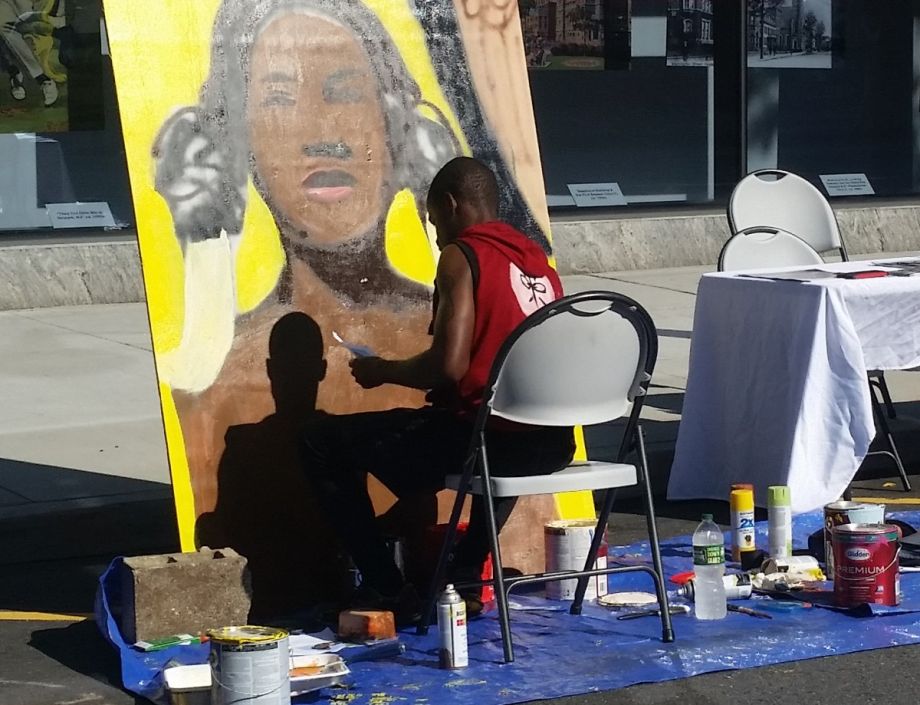 A painter from Yendor Arts works on a “practice mural'' at a First Fridays event in downtown Newark, New Jersey, in July. (Photo by Miriam Ascarelli)

On the night of June 23, there were two shows at the New Jersey Performing Arts Center in Newark. One, under the bright lights of the building’s 2,700-seat concert hall where the audience had paid anywhere from $50 to $120 for a ticket, was with a well-known singer, Chaka Khan. The other could be found on the third floor, in NJPAC’s smallest venue, the multipurpose Chase Room. There, four actors, with a day’s worth of rehearsal under their belts, were pouring their hearts into a staged reading of a play written by up-and-coming Newark-born playwright Pia Wilson. Tickets were $5 each.

The healthy interdependency between anchor institution and emerging artists points to one way Newark is trying to navigate arts-driven revitalization equitably. The path is challenging — there’s tension around longtime artists and displacement as the city pursues prosperity — but the attempt is also a firm nod to Newark’s history as an arts and culture star in the U.S.

Revitalization is also being spurred by $2 billion in construction. Cranes and jackhammers, especially downtown, are part of the city landscape. Hopes are high. In Mayor Ras Baraka’s state of the city address in March, he called for Newark to become a “national model for urban economic development and corporate civic responsibility.’’

That artists are critical to achieving that goal was reinforced during the annual meeting of arts nonprofit Newark Arts in June. Newark schoolchildren performed at the event, which was also a platform to announce the winners of this year’s ArtStart Grants. The seed grants, of $3,000 to $5,000 each, are designed to bring arts programming to the city’s neighborhoods, with an eye toward areas that are often neglected. A total of 16 projects were funded this year.

“I’m going to say what everyone in this room already knows,” Executive Director Jeremy Johnson told the 300-plus people in attendance. “Newark is in the midst of an arts and cultural boom. You can see it. You can feel it.’’

Johnson cited new numbers from Southern Methodist University, which ranked Newark (along with neighboring counties) ninth in the nation on its arts vibrancy index. He then ticked off his supporting details: the many murals that have beautified neighborhoods and instilled civic pride, the crowds at gallery openings, the people who have flocked to music festivals at parks around the city.

He also singled out Express Newark. The new arts incubator is in a former downtown department store spitting distance from NJPAC. It had been boarded up for more than 30 years.

Since its opening last spring, the building has quickly become a crown jewel of downtown, lighting up the block at night and attracting shoppers to the new Whole Foods, which occupies the first floor of the building.

“If this is your first time in this space,” Johnson said, “welcome to a revolutionary addition to the Newark landscape.”

More is coming. An East Coast outpost of the Grammy Museum is scheduled to open in the Prudential Center arena downtown this fall. A long-abandoned bank building in a poor neighborhood in the city’s South Ward is being converted into co-op apartments that will be marketed to artists. The building will include a poet’s cafe, communal work spaces and a performance space.

And in the West Ward, another poor neighborhood, the city is moving forward with plans to create a 30-foot art wall that will beautify an electrical switching station.

All this excites people like Rodney Gilbert, 49, a longtime Newark artist and the founder of Yendor Productions (Rodney spelled backwards), an arts company that has done extensive work in Newark.

“It’s brilliant,’’ Gilbert says of plans such as the one to transform the old bank building into artists’ housing. By incorporating performance space and a cafe, the project will help engage the community, he says, and ‘’bring the South Ward to the downtown.”

Gilbert, an adjunct professor of theater at Drew University, is especially proud of the role he has played in overseeing the city’s mural program, which has provided artists with jobs and added images that celebrate Newark’s heritage.

Gilbert directed Pia Wilson’s play as part of a collaboration between Yendor as part of NJPAC’s Stage Exchange program. Set in Newark, the play chronicles the struggles of a black brother and sister as they navigate issues such as anti-LGBT sentiment and colorism in the African-American community. Gilbert says the partnership is important because it nurtures art that reflects stories about “people who look like me who come from environments like me.”

Looking ahead, as a new (and wealthier) residents move into the new downtown high-rises, one challenge will be “keeping things authentic and being intentional about what works we want to produce out of Newark,’’ Gilbert says.

Arts in Newark, Yesterday and Today

Newark is the birthplace of some of America’s greatest talents, such as writer Philip Roth, jazz singer Sarah Vaughn and disco queen Gloria Gaynor, but its rich cultural life has often been obscured by the legacy of the 1967 riots. Sparked by a police brutality incident involving a black cab driver and fueled by a deep frustration about the neglect of the African-American community, the riots — referred to as the “rebellion’’ by many locals — lasted for five days.

For Newark, which modeled its City Hall on the Paris Opera House and once served as a testing ground for Broadway shows, the riots were devastating. Crime skyrocketed. In 1975, less than 10 years after the riots, Harper’s Magazine declared Newark to be one of the five worst cities in America. The population plummeted, reaching a low of 273,000 in 2000. It only began inching up again in 2010, and the most recent numbers, show a population of around 280,000 for 2016.

Today, overall reported crime is down to its lowest level in 50 years, according to data provided by City Hall, but crime and poverty still remain a challenge. According to a policy report published this year by the New Jersey Institute for Social Justice, almost 70 percent of Newark residents earn less than $40,000 a year and 33 percent of the city’s black population lives in poverty.

But even through the lean years, the arts in Newark never died. Perhaps most significantly, the Newark of the late ’60s and ’70s gave rise to the Black Arts movement with the poet Amiri Baraka (his son Ras is now mayor) as its leader. The movement celebrated black culture and identity, and many of today’s Newark artists say Amiri Baraka’s devotion to art and to his community has been a source of inspiration.

Moten says the current vibrant grassroots arts community has strong support from City Hall. Just the fact that the mayor has created an office specifically devoted to arts, cultural development and tourism is evidence alone, she says.

A lot has happened to make Newark more attractive to investors, but there is little doubt the city’s artists have played a huge role. Artist-run galleries like Aljira and Gallery Aferro have national reputations and are consistently cited as must-see places to go in Newark.

Johnson says the foundation for this energy was laid, in part, by the annual Open Doors Citywide Arts Festival, which makes artist studios accessible throughout the city for four days every October. The festival is in its 16th year, and is credited with attracting artists of all stripes to the city, connecting artists to each other, and making them aware of potential space, which, especially in the early days of the festival, was cheap and abundant throughout the city.

Success in cities often means rents go up — a threat to poor residents who aren’t benefiting from revitalization and, often, to longtime artists. And the feeling that the ground is shifting in Newark is palpable. According to community advocates, in Ironbound, a neighborhood home to a large immigrant population, particularly from South and Central America, rents are already going up and pushing longtime residents out.

Downtown, locals are keeping track of the fast-changing dynamics. Their watchfulness can be heard in conversations with people like Burley Tuggle, co-owner of the Artisan Collective, a consignment shop that sells wares by local artists and artisans. Even though Tuggle and her cohorts are paying the same rent as they were five years ago, their landlord is no longer willing to give them a lease longer than one year. While she remains optimistic that the development tide will be good for her business, she senses rent increases are coming.

That same feeling bubbled at an exhibition at the Index Art Center last fall that paid homage to 31 Central, an artists’ work space that has been a hub for the downtown arts community for more than 30 years. According to curator Lowell Craig, the exhibition was prompted by the knowledge that 31 Central will eventually be transformed into another use. Akintola Hanif, an artist who works there, says there has been no formal announcement about exactly what will happen and when, but the expectation is that artists will lose their spaces in about a year.

Hanif say he is not personally worried about how the situation will affect him because he is well established in the community, but he knows others will have to scramble.

In a documentary that Craig produced for the exhibit and posted on YouTube, Katrina Bello described her uncertainty. The painter, who works out of 31 Central, said, “I’m getting nervous, aren’t you? The impact is mostly on us artists. The community, I think, will really appreciate the changes in the neighborhood and attract other groups of people to come into Newark. But as far as the artists who are actually working and living here and actually are part of the revitalization of the community, a lot of us will be impacted in a negative way.’’

Just beyond Newark’s core, Fayemi Shakur, executive director of City Without Walls gallery, says she suspects development will force artists to move out of the immediate downtown and find work spaces elsewhere.

“Artists are resourceful,’’ she says. “You just wish it wasn’t so much of a struggle, especially given how much the artist community has contributed.’’

As for Johnson, he points to the city’s overall efforts to build affordable housing. Baraka is pushing for an inclusionary zoning ordinance that would require 20 percent of large residential projects be set aside as affordable units, but the measure has yet to be passed by the City Council.

Meanwhile, Moten sees signs that Newark’s reputation as an arts and culture hub is being recognized nationally once again. She says she has received inquiries from seven area museums about moving to Newark, including the African Artifact Museum in Brooklyn and the Children’s Museum in Elizabeth, New Jersey.

“It shows that artistic culture is of value to them, and they see it in this city,’’ she says.

Miriam Ascarelli covered local government and immigration for The Jersey Journal and now works as a lecturer in the Humanities Department at the New Jersey Institute of Technology in Newark. Her work has also been published on the Ms. Magazine blog, New Jersey Monthly, BrickCityLive and The New York Times.