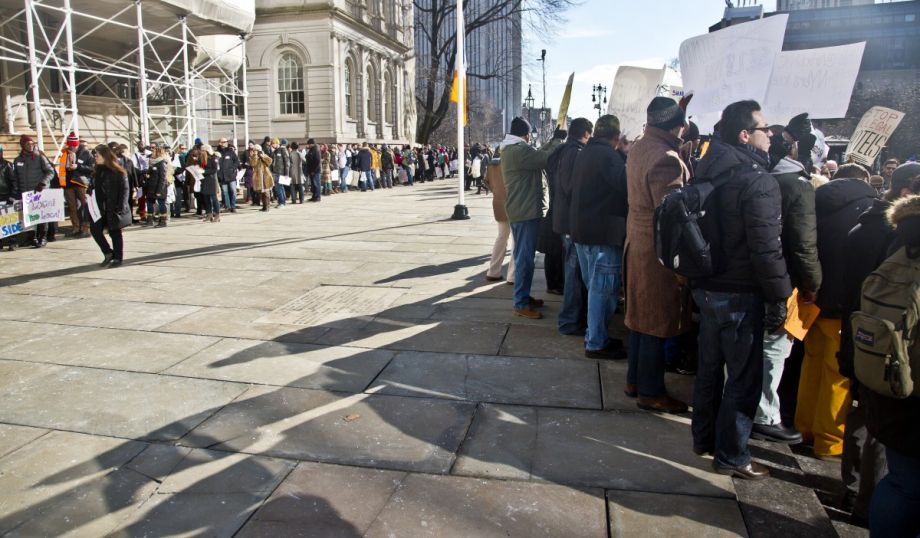 Supporters, left, of Airbnb stand in a line to attend a hearing at City Hall, while opponents, right, rally at a press conference at New York City Hall in 2015. (AP Photo/Bebeto Matthews)

New York has issued a subpoena to short-term rental sites Airbnb and Homeaway, seeking data about the tens of thousands of apartments available through the sites, Gothamist reports.

It’s the latest salvo in a battle between New York and Airbnb which started in July 2018, when the City Council voted unanimously to require Airbnb and other short-term rental sites to disclose data on names of hosts and types of rentals to a city office, in an attempt to restrict Airbnb rentals to ones in which the host is present.

Under state law, it’s already illegal in most NYC buildings to rent out units for less than 30 days at a time; the data sharing would simply make it easier to enforce the existing law, the New York Times reported.

Airbnb and Homeaway sued the city, saying that the new law violated the Fourth Amendment’s provisions against illegal searches. In January, Judge Paul Engelmayer of the US District Court in Manhattan agreed with the websites, placing an injunction on the law’s going into effect.

Airbnb and Homeaway argued that the law would “force them to incur heavy compliance costs and/or civil fines for noncompliance,” the judge summarized in his ruling of Jan. 3. “In contrast, they argue, a preliminary injunction will not prejudice the City because … the City can continue to investigate violations … using conventional information-gathering tools such as targeted subpoenas.”

Hold my beer, the City said, and subpoenaed Airbnb for data on 20,000 listings.

Mayor Bill de Blasio tweeted Monday that Airbnb is “refus[ing] refuse to provide the transparency we need to protect New Yorkers’ homes.” Critics say that a small number of Airbnb hosts are actually operating de facto hotels, taking otherwise rentable apartments off the market and raising housing costs for residents. Research from David Wachsmuth, a professor at McGill University, seems to support that contention. According to Vox, Wachsmuth’s 2018 study of New York real estate found that the hosts that make the most money on the site lease out multiple units. These commercial operators make up only 12 percent of the hosts on the site but earned 28 percent of the revenue.

“By and large, there’s a perception that Airbnb is a platform for home sharers, and so much of the research I’ve done has been about saying, ‘Actually, not really,’” Wachsmuth told Vox. Airbnb has said that 92 percent of NYC hosts are actually renting spare rooms or couches in their primary residences — but has refused to provide granular data to support that claim, such as the data the city is requesting.

Airbnb also says that since November 2016, its “One host, one home” policy has been active in the five boroughs, barring hosts from listing more than one entire home on the platform. Since implementing that policy, it’s removed nearly 5,000 listings from the site that appeared to be in violation. According to Vice, however, it’s still fairly easy to get multiple listings onto the site—New York just sued two operators for more than $20 million for posing as individuals while operating a network of listings.

In response to the latest subpoena, Airbnb’s head of global policy Chris Lehane sent a letter to the mayor saying that “Simply put, relying on outdated rules that don’t recognize the way home sharing works today shortchanges our community and the City of New York.” Lehane added that the company “offered to work with the City to collaboratively focus enforcement efforts on weeding out large scale commercial operators who seek to circumvent our policies. And while that offer hasn’t yet been accepted, we stand by it.”

EDITOR’S NOTE: A previous version of this article conflated the specific purpose and larger intent of the July 2018 City Council vote. We’ve clarified the language to reflect the distinction.