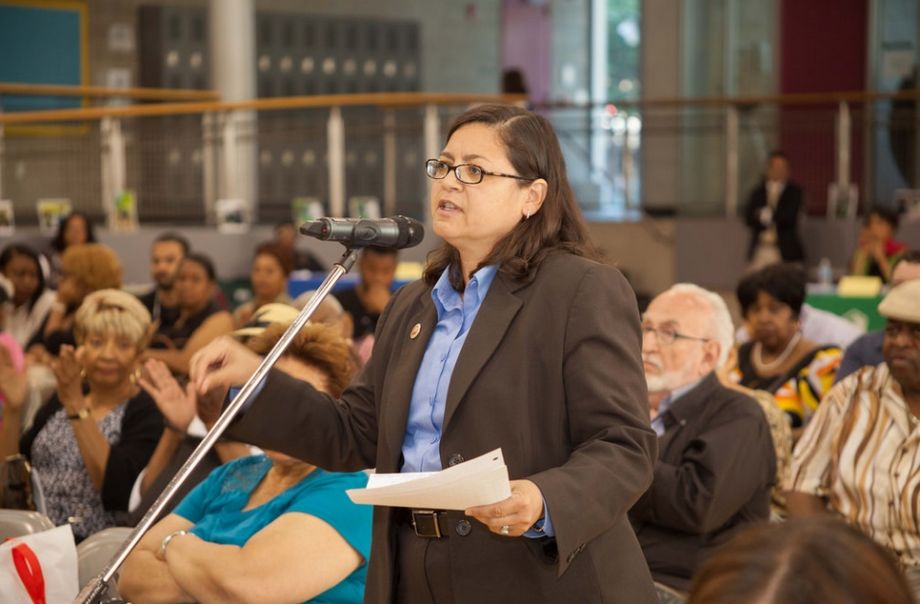 In early December, the New York City Housing Authority (NYCHA) announced that it had sold a 50 percent stake in eight of its developments to L+M Development Partners and BFC Partners. NYCHA will receive $150 million for the initial buy-in, an additional $100 million over the course of two years, and an additional $100 million over the next 15 years — money that helps with their dismal budget deficits. The developers have also agreed to spend $100 million on renovations and building improvements.

The deal highlights how cities around the U.S. have been striving to make up for a continued lack of federal support for public housing, especially with so many of those homes in disrepair. Earlier this year, I wrote about how HUD Secretary Julián Castro touted the possibilities of expanding a program that brings more private money into that mix.

City Councilwoman Rosie Mendez, who first took council office in 2006 and represents the Lower East Side, East Village and Alphabet City, has been a vocal critic of partnerships that have the potential to lead to the privatization of public housing. Two developments in her district — Campos Plaza and East 4th Street Rehab — will be affected by the recent NYCHA deal. I asked Mendez — who grew up in public housing in Brooklyn and currently serves on the council’s Public Housing Committee — about her reservations.

NYCHA recently sold half of its stake in 900 units. In response, you were quoted in the Wall Street Journal as saying, “I view it as a road to privatization.” Do you see NYCHA making more of these types of deals in the future?

I don’t know. And that’s what worries me. After President Obama got into office, we saw 21 city and state developments receive federal funding as a part of stimulus money. It allowed NYCHA to create a joint venture with Citi Community Capital [Citibank’s community development arm].

In this most recent sale of six developments, they are all project-based Section 8, which is a different federal funding housing stream. In Campos Plaza, two of the buildings are Section 8 housing and the other two are traditional public housing. So essentially, we’re splitting that development in two.

The tax credits [that the developers take advantage of to make up the difference between what the tenants pay and market-rate rents] run out in 30 years. When these subsidies run out, you have the option of staying in the program or opting out. What we’ve been seeing over the last 10 years is a lot of the owners opting out of the program and taking those units to market rate. How will NYCHA keep their partners in the program after 30 years?

It worries me that NYCHA is going to keep thinking outside of the box and keep doing these little public-private ventures in the future, because it changes Section 8 housing as we know it and it does open the door to privatization. I don’t know what’s going to happen 30 years from now. … These people are not going to be around in 30 years. Things change. Priorities change. That’s my fear about what’s at risk.

Do you see a difference in approach that NYCHA is taking toward traditional public housing and Section 8 units?

Of the project-based Section 8 developments that were just sold, East 4th Street Rehab is in my district and it is a tenement building. It was added to NYCHA’s portfolio during the fiscal problems of the ‘70s. I think that is fine, because those were tenements before they came to NYCHA. They were a different housing stock. Some of the tenants may have even stayed through the transition. But for some of the other developments, particularly Campos Plaza, I think it’s disconcerting. I think it’s going to create a lot of confusion for tenants. They are supposed to be closing the part that is now project-based Section 8 and start making renovations in January. All of the tenants in the traditional public housing aren’t going to see these renovations. Even though some of this has been explained to them and they’ve gone to public meetings, they’re still going to wonder, ‘Why are they getting the repairs and not us?’

At a meeting we had yesterday with some of the tenant leadership, it was explained to the Section 8 residents that if they did not pay their rent or some other issue happened, that they would be going to housing court. Currently traditional public housing residents have exhaustive administrative remedies and internal hearings before going to housing court. If you find yourself in housing court, you have a big problem, because that means you couldn’t resolve your problem administratively at another level. This is something that tenants were trying to wrap their heads around yesterday, because it’s not something that automatically came to us.

Did the proposed investment per apartment — $80,000 — seem low, high or just about right?

It’s just about right. Some apartments might need some more money, because of mold and some of the other issues exacerbated by Hurricane Sandy. The ground-floor apartments of Campos Plaza One [where Section 8 tenants live] were flooded during Sandy. My recollection is that the ground-floor apartments of Campos Plaza Two [where traditional public housing residents live] did not get flooded. All of our basements got flooded.

Repair and maintenance issues have been in the news for years, but the shooting of Akai Gurley has raised more concerns. Where do you think NYCHA could be improving with respect to repair turnaround?

They can be making improvements on all levels. The problems with repairs at public housing developments have been continuous now for the last nine years that I’ve been in office. About six years ago, it peaked to where if you called in for a basic repair, you would get a repair date two to three years down the road. It was simply reprehensible. NYCHA didn’t have to comply with the laws of New York City, apparently. During the last two years, because of some investment from City Council and some initiative funding that our then-speaker put in place, we were able to give $10 million dollars each year to help with the backlog of repairs. That money was matched by NYCHA, so with our money and their money, they were able to make a big dent in their repair backlog.

Recently, I hear that when you call in a repair, they’re giving you six-months-to-a-year wait estimate and I don’t understand why that’s happening again. There was a hearing last week where they were saying that fixing a light isn’t an emergency repair; it could take seven days to fix. It is a safety issue, so it should be considered an emergency repair. In this case, it ended up leading to the death of one person.

Is there any hope that there might be more federal, state or city funding opportunities down the pipeline or is there a finality about that tapering off?

When the Mayor [Bill de Blasio] first took office, one of the first things he did was to undo the remaining payments that the Housing Authority had been making to the NYPD. The Housing Authority was paying $72 million to the police for what they called “above baseline” police services. When I was the chair of the [Public Housing] committee, I was never able to get NYCHA to exactly define what “above baseline” meant. Because everything that the NYPD did seemed like regular police services that other landlords were not paying for. This is money that is being recouped by NYCHA that they are using for repairs and staff and whatever they need to do to get things done.

The bulk of the problems NYCHA and other public housing authorities have is that the federal government is not reimbursing public housing authorities dollar for dollar. For every dollar that NYCHA spends, it’s only recouping 81 cents from the federal government. Part of the reason why they’re looking to do these public-private ventures, to figure out how they shorten that budget gap. If the federal government were to step up one dollar for every dollar it spends, we wouldn’t be seeing these problems. With Congress back in Republican control, I don’t see NYCHA getting the money that it’s supposed to get, so this will be a problem that will continue to fester.