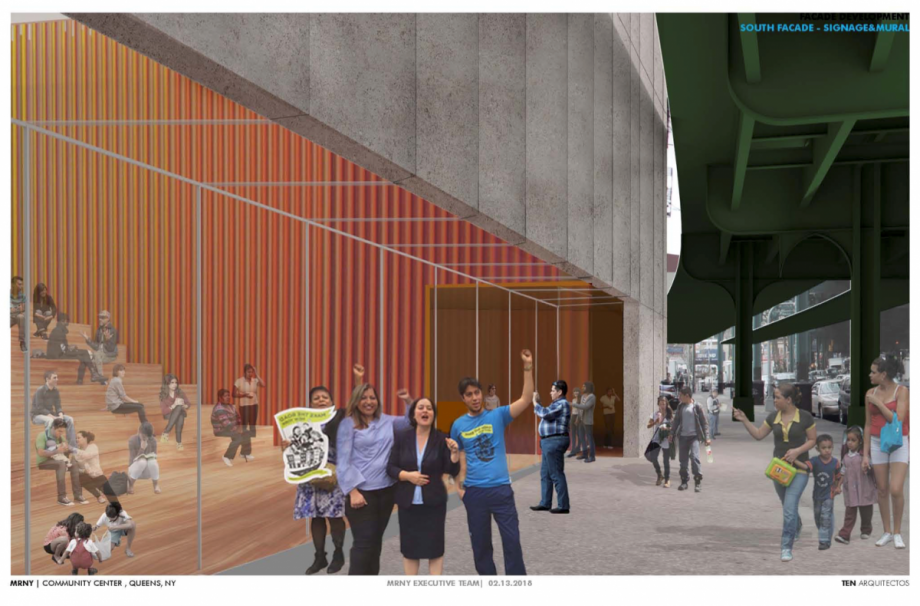 It was Tenzing Chadotsang’s second stint working at Chhaya Community Development Corporation, a nonprofit organization that provides a range of services and supports community organizing and advocacy for primarily South Asian immigrant communities at risk of being displaced from Queens, New York. At the time, in 2014, the organization foresaw the potential of its own displacement as a result of rising commercial rents.

But unlike the aspiring homeowners whom Chhaya has assisted since its founding in 2000, there isn’t exactly a bank a nonprofit can turn to for a loan to acquire or build a community facility of its own. There has never been a push at every level of government for nonprofits to buy property the way there has been for homeownership. So, just like nonprofits typically cobble together funding for their day-to-day operations, they have to cobble together financing to make a major purchase.

One place community organizations like Chhaya can turn to is the city itself. Every year, the City of New York allocates capital funding to build or make repairs and improvements to infrastructure, parks, schools, libraries, clinics and other public facilities but a good portion of New York City’s capital funds also go to facilities owned by private nonprofits, such as museums, theaters and other cultural institutions, as well as industrial facilities and community facilities owned and operated by nonprofits. So Chhaya applied for city funding — but it didn’t get it.

Chadotsang would eventually come to manage the city’s capital funding for nonprofits for almost two years. From there he went to helping another nonprofit, Hester Street Collaborative, build a program to support community-based nonprofits with all aspects of real estate development, including accessing city capital dollars. Although the application doesn’t open till January, now is the time of year for nonprofits to start putting together the extensive application materials, and Hester Street wants to help.

“There’s a new sense of urgency that we need to blow shit up,” says Betsy MacLean, executive director at Hester Street Collaborative. “In the context of gentrification and crazy ass rising rents, we need to make sure people can stay and the people who serve them can stay.”

MacLean first became familiar with the city’s capital funding for nonprofits at a previous job, working for the Cypress Hills Local Development Corporation, based in Brooklyn. It was while working there, around ten years ago, that she first began talking with Make the Road New York’s leadership about accessing the city’s capital funding to acquire and build its own space. But the application was daunting, and it wasn’t a priority at the time. But earlier this year, Make the Road New York did finally break ground on its new headquarters in Queens, New York — thanks in part to around $5.6 million in city capital funding that it got with Hester Street’s support.

The hefty application isn’t necessarily a bad thing. At its core, the process is designed to protect the city from abuse and corruption. Also, the funds don’t come directly from taxpayers. The city funds nearly all its capital budget, even capital funding for nonprofits, by issuing tax-exempt municipal bonds — borrowing from investors and paying them back over time through future tax revenues. Without a robust process, bond rating agencies might downgrade the city for having poor financial discipline, which would mean having to offer investors higher interest rates to compensate for the perception of higher risk.

The New York City Economic Development Corporation oversees approved capital funding for nonprofits in the city. According to its website, the agency has overseen funding for 150 nonprofit-owned industrial or community facility projects totaling around $1 billion in capital funding.

Some, like Greater Jamaica Development Corporation, Evergreen Exchange or Greenpoint Manufacturing & Design Center, are nonprofit developers themselves, and don’t need Hester Street’s support. But many other nonprofits in the city aren’t developers, and aren’t interested in becoming one.

“Our clientele is exclusively nonprofits that don’t have internal development capacity,” MacLean says. “There are a bunch of [vital nonprofit organizations] who are just falling through the cracks.”

The first thing nonprofits need to do is figure out what their options are and what each option could cost in the short-run or the long-run. It could be as simple as securing a long-term lease from a friendly developer, and then applying for city capital funding to build out the space to meet the nonprofit’s needs. Hester Street is working with a few community-based organizations in its pipeline who are at this phase.

“It’s really playing out capital project possibilities and how those jive with their organizational goals and needs,” MacLean says.

If it’s a new construction project, the application requires preliminary cost estimates and a timeline, as well as a detailed work plan including site plans or floor plans — all preferably drafted by a professional architect or engineer. Hester Street can offer its staff architects to work on the application, but at a cost.

“It’s the nonprofits’ relationships with their city council people that really make this happen,” MacLean says.

That said, some critics have accused council members of using public dollars to silence potential critics. One local report earlier this year cited evidence of a South Bronx council member using the threat of denying future city dollars to get one nonprofit employee fired and another organization evicted from its office space because of the employee and the organization’s involvement in community organizing.

“If we didn’t have to apply for city dollars it would be awesome, the problem is there’s so few funding sources to do community facility development,” MacLean says.

Another reason applying for city dollars can be a hurdle for nonprofits: The city doesn’t finalize its budgets until the end of June, which means organizations have to wait up to six months to know if their application was approved. Say a nonprofit is hoping to buy a building — they have to keep the seller committed for half a year while they play the waiting game.

The application for city capital dollars also requires written commitments from the applicant, other funders, or banks and other financial institutions to cover the rest of the cost of the project. Under the current rules in New York City, for nonprofit-owned community facilities the city’s capital funding may cover up to 90 percent of the first $2 million of the project, and up to 50 percent of the cost beyond that. So for Make the Road New York’s $28.6 million new headquarters, Hester Street also supported the nonprofit to combine funding from six other sources besides the city — not unusual in the world of community facility development.

Once the application is approved and work begins, Hester Street offers to stay on as an advisor throughout the construction process, managing all the paperwork including everything required for nonprofits to finally get the city capital dollars. None of the funding comes up front for community facilities owned or operated by nonprofits. It all comes only after showing proof that work was completed and contractors were paid — a measure to prevent corruption. To minimize the impact on the nonprofit’s budget, Hester Street doesn’t get paid until the city dollars finally land in the nonprofit’s bank account.

MacLean would like to get to the point where this real estate advisory work for nonprofits can be a self-sustaining line of business for Hester Street, but that’s years away, if it ever happens. Other nonprofits have tried their hand at real estate consulting work in New York City, but none have emerged as a consistent presence. There are also some for-profit developers with an established presence in New York, like Alembic Community Development, who specialize in partnering with nonprofits.

Right now, the other three or four organizations in Hester Street’s pipeline also came from MacLean’s or Chadotsang’s existing professional networks, but MacLean hopes the work eventually starts to speak for itself and attract more clients.

“I hope we get to a place where we can just point to these really awesome projects,” MacLean. “I think at this point, we have kind of a critical mass of projects, and a really awesome team that’s focused on this stuff.”