This Might Be the Most Important Handout Needy New Yorkers Need 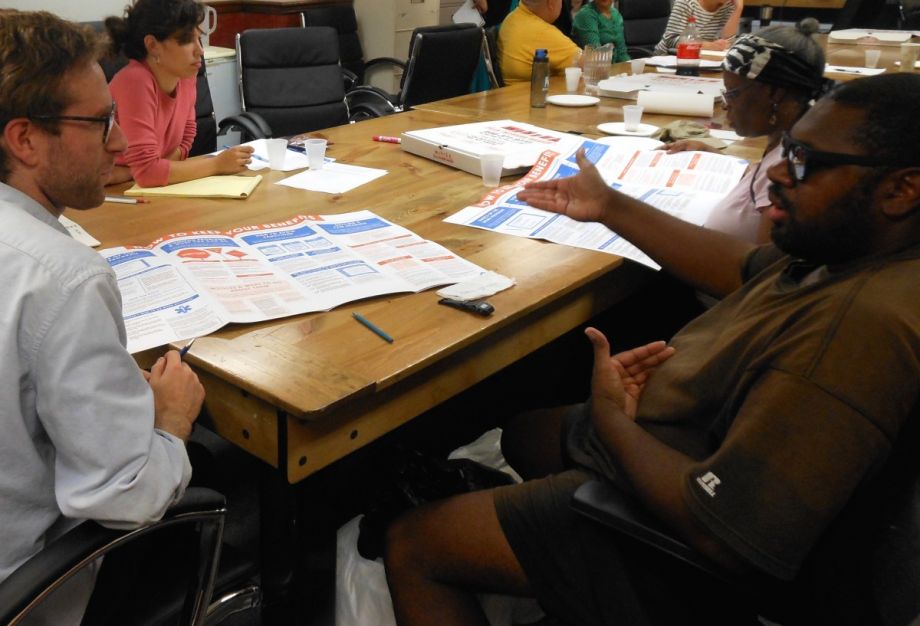 The project team gets feedback on the design from Safety Net Project volunteers. (Credit: Center for Urban Pedagogy)

“We know that one of the number one contributors to homelessness is evictions,” says Denise Miranda, managing director of the Urban Justice Center’s Safety Net Project (SNP). “And we know that public assistance often contributes to the rent keeping people in their homes. … There are real ripple effects when the safety net is compromised.”

In order to prevent homelessness, alleviate extreme poverty and provide transitional help for people seeking employment, New York’s Human Resources Administration (HRA) provides public assistance for approximately 350,000 people. But “navigating the public assistance labyrinth,” as Miranda puts it, can be a job in itself.

Applicants first have to figure out if they qualify for benefits, and if they do, once they are in the system they have to keep on top of appointments and work requirements, maintain necessary documents and figure out what to do if they have an issue they need to dispute.

Through legal representation, research and policy advocacy, SNP reaches about 2,500 people each year who have trouble accessing public assistance. They wanted a way to quickly and easily assist the other tens of thousands they couldn’t possibly represent due to limited resources.

So SNP teamed up with the Center for Urban Pedagogy (CUP) and design studio All Other Services to create “Your Guide to Welfare in NYC,” a pullout poster, released today, that clarifies and visualizes the “big picture” of public assistance in NYC.

With their idea for the guide in mind, SNP applied to CUP’s Making Policy Public program through a competitive process; the community education program breaks down complex issues to make systems more understandable to the general public with the intent of increasing meaningful civic engagement.

“Your Guide to Welfare in NYC” designers Joel Stillman and Kevin Wade Shaw took their compositional cues from the giant stack of papers that people are handed when they are getting ready to apply for public assistance.

“They wanted a lot of the boxes that they use to organize information to look like paper, forms and brochures,” says CUP’s Ingrid Haftel. “[The guide] is kind of standing in for a lot of dense forms that people have to wade through. Part of it was just distilling as much of it as we could, stripping out the jargon that people wouldn’t be familiar with and just putting it in plain language.”

For over a year, SNP went through HRA materials figuring out what public assistance recipients needed to know, with a few priority shifts over time. “A really interesting thing about this project is, as we made a list of things that were significant barriers for applicants and recipients, those items changed over the course of those six or seven months, because the policies, procedures and protocols within HRA started to change,” says Miranda.

Incoming Mayor Bill de Blasio appointed former Legal Aid Society Attorney-in-Chief Steven Banks as HRA Commissioner last April. Since then, he’s been credited with slowly shifting the culture of the department from one with a reputation for being punitive toward recipients, to one that’s more collaborative and supportive of their needs.

During the guide’s design phase, the team also held focus groups with the intended audience — SNP clients. “[They] were able to give critical feedback as to the content, the framing of the information, what parts they felt were most important,” says Miranda. The clients also gave input on the poster’s layout, schematics and color.

A press conference about “Your Guide to Welfare in NYC” is being held this morning — with HRA Commissioner Steven Banks in attendance. SNP action committee members are distributing the posters in front of HRA centers throughout the city. All of the community-based organizations that are partners with SNP will also be distributing the guide to their clients.

“We’re also hopeful that HRA would consider actually implementing the posters and actually displaying them within the centers. Because we believe that the information here can help their workers in terms of answering commonly asked questions and advising people as to what they might bring and what the various processes are,” says Miranda.

She adds that this poster is another way for public assistance recipients to be treated in a dignified way, respectful of the fact that these are benefits they are entitled to: “One of the goals of the poster and of this whole campaign is to let people know that there is a real possibility that there are programs out there that might be able to help them in their day-to-day survival for their family.”