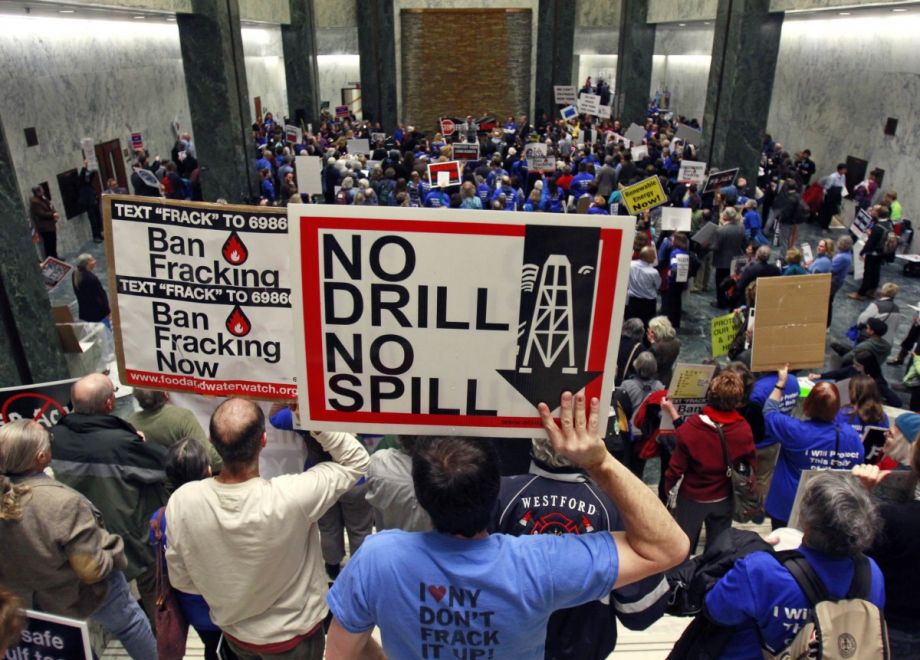 RNG is, chemically, the same fuel as the natural gas that has driven the U.S. fracking boom — but you don’t have to frack to get it. (AP Photo/Mike Groll, File)

Imagine, if you will, a waste disposal system that worked like this: A garbage truck picks up organic waste along its regular route, then drops it off at a facility that converts that waste into clean-burning renewable natural gas (RNG) to be used to fuel the trucks, which would pick up the waste that would be converted into gas that would fuel the trucks … you get the idea.

“My vision is really about trying to create a circular economy,” says Kathryn Garcia, commissioner of the New York City department of sanitation. “Picking up solid waste, creating natural gas and fueling my fleet.”

Such a system is a long way from becoming a reality in New York, but Garcia was nonetheless honored at a recent event by Energy Vision, a non-profit advocacy group whose mission is to promote the use of alternatives to gasoline and diesel fuel in the nation’s heavy vehicle fleets.

New York has been conducting pilot programs that could someday lead to that closed-system vision being realized — and in the meantime the city is getting closer to a zero-waste future. At the Newtown Creek Wastewater Treatment Plant, they’re scaling up a nascent effort that converts organic solid waste into biogas, some of which is then being used as fuel for heating systems. The city is examining the feasibility of using that gas in the citywide natural gas system run by utility company National Grid.

New York is also running a pilot program for organic waste collection (with 100,000 households and nearly 800 schools), which now makes up around 30 percent of the city’s waste stream, about 3,565 tons per day. Currently that waste is being composted, but it could eventually be used to create fuel for sanitation trucks.

The biggest barrier to that shift in New York, says Garcia, is the need to find space for natural gas refueling stations, which take up more room than conventional facilities. In a dense city with high real estate values and heavy pressure from residential and commercial development, that’s a serious challenge. Garcia says her department is also testing hybrid electric and hybrid natural gas trucks. “I think renewables are where we are going,” she says.

Joanna Underwood, the president of Energy Vision, says that her organization is focusing on RNG for heavy vehicles because of the multiple benefits the fuel provides. “It takes organic waste and turns it into the cleanest vehicle fuel that’s available right now,” she says. A few municipal transportation fleets, such as Pierce Transit in Pierce County, Washington and the sanitation department in DeKalb County, Georgia, have transitioned many or all of their vehicles to RNG.

Underwood is hoping for a lot more such moves in the future. She points out that RNG is, chemically, the same fuel as the natural gas that has driven the fracking boom in the United States — but you don’t have to frack to get it. “There aren’t any hidden secrets here,” she says. “This is something that can be done now. The biggest obstacle is not technology.”

Energy Vision would like to see government incentives for implementing RNG systems. “The biggest thing that would accelerate projects are state and federal laws that would provide an incentive to use fuels that are lowest carbon and available,” she says. Put RNG systems in place, says Underwood, and the benefits stretch far into the future. “Once you do that, you’ve got abundant clean energy you can have forever,” she says. “It’s a stunning use for organic waste.”

Her organization, she adds, is focused on getting the word out, and has published a comprehensive RNG guidebook for municipalities. “Communities have to know this is possible and what steps to take to pursue it,” she says. “We’re expanding awareness at the local level. Waste is at the local level, and so is creativity.”