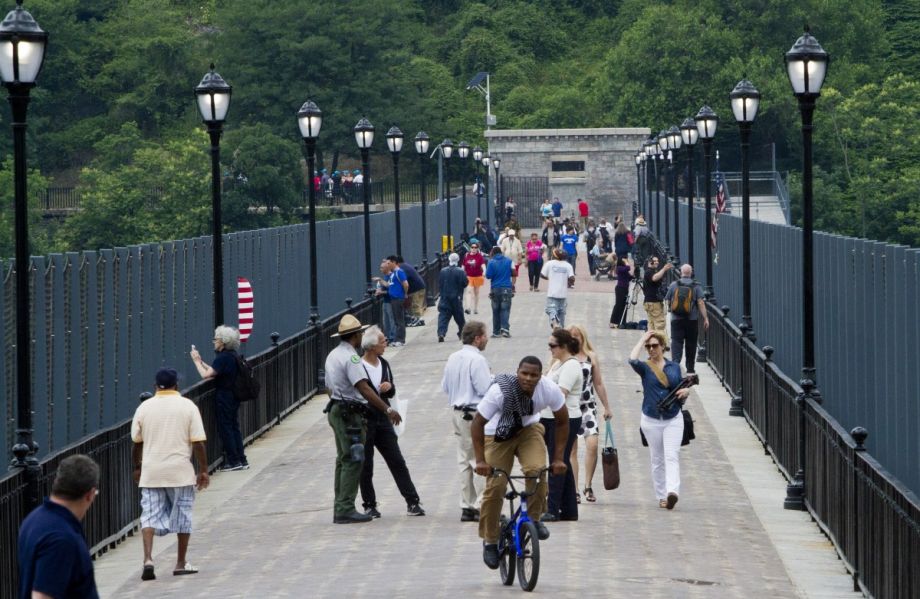 New York City’s High Bridge opened this week — after being closed for more than 40 years.

The bridge, which connects the Bronx and Upper Manhattan, is for pedestrians and cyclists. The $61.8 million restoration was paid for by the city and some Federal Highway Administration money, according to the New York Times.

A view from inside High Bridge Park looking toward the Bronx. (AP Photo/Bebeto Matthews)

The bridge originally opened in 1848 to bring fresh water from Westchester County to the city, but it quickly became popular with pedestrians for its easy back-and-forth to the mainland and its beautiful views. Now fully restored, the bridge pays homage to its origins, with historical markers along the route.

“This is a place to connect with the generations of creativity, determination and genius who built our city,” the city’s parks commissioner, Mitchell Silver, said at the relaunch.

The bridge was part of a plan by former Mayor Michael R. Bloomberg to revive and restore eight major parks and sites across the city, from Fort Washington Park in Manhattan to the McCarren Park pool in Brooklyn. Mr. Bloomberg’s successor, Mayor Bill de Blasio, did not attend the event on Tuesday.

The restoration, financed mostly by the city but with some Federal Highway Administration money, included re-mortaring the stone joints, repainting the steel, repairing the brick walkway and restoring the antique handrail, as well as installing decorative lighting, ramps and safety fencing.

“This is almost the eighth wonder of the world,” Manhattan Borough President Gale Brewer said. “There really are no words to describe it. The opening of the High Bridge means that Manhattan will be connected to the continental United States by its one and only pedestrian bridge.”

The bridge is open to pedestrians and bicyclists daily from 7 a.m. to 8 p.m., but will close for the winter months.