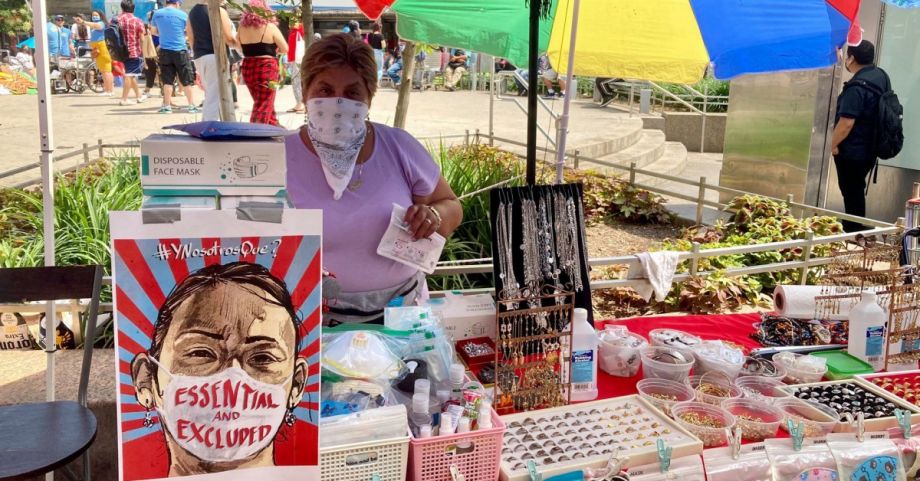 A street vendor in Queens selling masks along with jewelry during COVID-19. (Courtesy Street Vendor Project)

This June, more than 9,500 New York City restaurants applied for permits to use sidewalk and curbside space for outdoor dining. The city issued over 3,000 permits, and chairs and tables quickly filled the city’s sidewalks and streets.

The fast turnaround took Carina Kaufman-Gutierrez, deputy director of the Street Vendor Project, of the Urban Justice Center, by surprise. Street Vendor Project represents the thousands of vendors who work across New York City, mostly immigrants and people of color who operate small businesses but still struggle to make ends meet. For years the organization has advocated for an expanded and streamlined permitting process to little avail.

“We’ve seen tons of restaurants become street vendors overnight,” she says. “To see 3,000 sidewalk permits given out and to then think there’s only been 3,000 total citywide permits for food vendors, for nearly 40 years, is shocking.” (While the city has only issued 3,000 full-time street vendor permits, part-time and additional permits push the cap to 5,100 total.)

Though the fight for a better permitting process has been ongoing, COVID-19 has mobilized the organization and led to more urgent calls for better treatment from the city. There have been successes, like the creation of health and safety protocols in the absence of city guidance and the removal of NYPD from vendor enforcement. There’s also a spotlight on a 2018 City Council bill proposing a new framework for how vendors could be regulated. Though the bill has the support of more than half the council, it has yet to come up for a vote.

“When we ask what does a just recovery look like — a huge thing not only for the city to make revenue, but to create jobs for folks who are primarily immigrants, low wage workers, and have been struggling and disproportionately affected by COVID-19, would be to fully legalize street vending and lift the permitting caps,” Kaufman-Gutierrez says.

Street vendors have long had a tense relationship with New York City government, despite being a crucial component of local economies across the city. Back in the 1980s the city capped the number of street vendor permits to 5,100, where it has stayed, in the belief that street vending overcrowded city sidewalks.

During COVID-19, vendors have struggled and felt the lack of city support. “We’re self employed … we don’t get any unemployment, we don’t get small business support, and there are no customers,” says MD Alam, a Midtown Manhattan vendor who made much of his business selling to office workers on their lunch break. “It’s been very difficult for us to survive.”

“Vendors so often fall into a category of their own within the informal economy,” explains Kaufman-Gutierrez. It means they’re largely excluded from city, state and federal relief, for reasons that include the informal nature of their work, not having adequate work history and not having a Social Security number.

Beyond the lack of financial relief, vendors had no city guidance on how to operate during the pandemic even while mobile food vendors and general merchandise vendors were deemed essential workers. To respond, Street Vendor Project partnered with the membership organization New York Committee for Occupational Safety and Health (NYCOSH) and WIEGO, a global network advocating for women in the informal economy, to develop their own.

Street Vendor Project developed big-picture guidelines with guidance from WIEGO, then hammered out health and safety specifics for New York State with NYCOSH, creating a pamphlet in English, Spanish, Mandarin and Arabic and distributing it across the city.

The organization worked with NYCOSH to hold a virtual health and safety training in those same languages. They asked vendors to draw how they’d adapt their cart, with vendors later texting photos of adaptations they made to trainers. Because each vendor has a unique setup they found different ways to meet the guidelines, like hanging plastic sheets as a barrier or placing caution tape and cones as social distance markers for customers. Street Vendor Project also followed up with one-on-one outreach to deliver supplies.

There were other creative adaptations. Some vendors don’t have internet or are not computer literate, so Street Vendor Project often works in-person on helping vendors with business matters like paying sales tax. With social distancing in place, legal director Matthew Shapiro started doing the work by phone, filling out vendors’ tax information and mailing them the paperwork to sign.

Street Vendor Project has long represented vendors in court to help them fight tickets (often for minor infractions, like being too far from the curb or too close to a crosswalk), while also advocating to remove New York Police Department enforcement of vending. In June, following mass protests in response to George Floyd, Mayor Bill de Blasio announced the NYPD would no longer enforce street vendor regulations.

It’s unclear when police will actually stop enforcement as the Mayor’s announcement has yet to be integrated into relevant city statutes. (Street Vendor Project tweeted about NYPD ticketing a vendor in late June.) It’s also unclear which city departments will be responsible for vendor oversight moving forward. The confusion has put a renewed spotlight on Intro 1116, the City Council bill proposing an entirely new framework for vendor permitting and regulation.

The measure would create a civilian unit that would be trained to oversee both vendor enforcement and education. Crucially, it would increase the number of permits available for the first time since the 1980s, something advocates believe could help the economic recovery from the pandemic. Increasing permits will also address the underground market — not unlike New York’s underground market for taxi medallions — in which vending permits can sell for over $25,000.

There’s been a surge of advocacy to push for fairer treatment from all levels of government. On Sunday, August 9th, street vendors marched with others excluded from government aid — day laborers, sex workers, domestic cleaners and recently incarcerated or detained people — under the slogan #FundExcludedWorkers. New York vendors are also part of a larger coalition that emerged, the National Agenda for Street Vendor Justice, which encompasses Washington, D.C., Chicago and Los Angeles.

This Thursday in New York, Street Vendor Project will hold a rally in Times Square to demand vendors are included in a just economic recovery with the passage of Intro 1116. A wave of support for passing the bill has hit social media, including support from politicians.

“We’re not just thinking about recovery, we’re thinking long term, beyond this,” Kaufman-Gutierrez says. “But the time is now more than ever to create these opportunities for folks to work legally, and for the benefit of the city.”