Despite Setback, NYC Keeps Fighting for the Unbanked – Next City

Despite Setback, NYC Keeps Fighting for the Unbanked 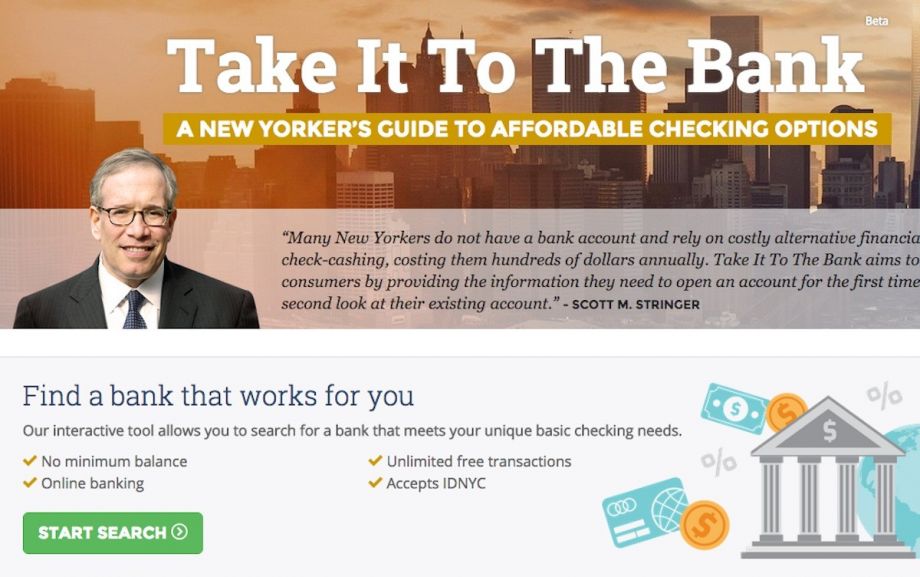 In June, the New York City Comptroller’s office released “Take It to the Bank,” an online tool to help address the problem of the unbanked in New York City.

Stand in front of an ATM in New York City, and count the next 100 people who walk by. It won’t take very long. Thirteen of them won’t even be able to use that ATM because they are among the 13 percent — that’s 825,000 New Yorkers — who lack even a basic checking account.

It’s even worse, percentage-wise, in other big cities. Fourteen percent are unbanked in Buffalo, Philadelphia and Baltimore. Seventeen percent in El Paso, Cleveland and Memphis. Twenty percent in both Miami and Detroit. (Nationwide, 7.7 percent of people are unbanked.)

Across the U.S., the highest unbanked rates are among non-Asian minorities, lower-income households, younger households and unemployed households, according to the latest report from the FDIC. Besides lacking means to store cash, conduct typical daily retail transactions and establish credit, which many Americans take for granted, alternative services like payday lenders gouge households underserved by mainstream institutions with fees — to the tune of $103 billion in 2013 alone.

The cause of reducing the numbers of unbanked took a hit recently, as the U.S. District Court in New York struck down a key provision of the Responsible Banking Act, which would have allowed the city to collect information on how banks were serving underserved communities, and to use that information to determine which banks it would use for its own accounts.

Given that loss, other efforts to encourage banks to serve those they’ve traditionally ignored may become even more important.

New York City Comptroller Scott Stringer has been working on this issue for years, including previously as Manhattan Borough President. In June, Stringer’s office launched “Take It to the Bank,” an online portal and outreach effort to help low-income families and their advocates navigate affordable and accessible banking options.

“We’ve known for many years that too many city residents lack the benefit of basic banking services,” Stringer wrote in an email. “Maintaining a bank account not only ensures that your money is safe, it helps you manage your finances and save for the future. Take It to the Bank empowers and engages New Yorkers to obtain the information they need to find affordable banking options available to them in all five boroughs.”

The good news is that there’s a range of affordable, safe checking account offerings that are a good fit for low-income families. The Comptroller’s office specifically details 74 products, one from each bank in the survey, including options with low or no fees, with low or zero minimum balances and low or zero opening deposit amounts required.

Accessibility remains a major issue, however — among 20 banks offering the most affordable combination of fees and opening deposits, 18 had 25 or fewer branches. While mobile and online banking are growing in popularity, even among those left out of mainstream banking, there are still potential customers for whom brick-and-mortar locations are important.

Notably, two out of three recommendations in the report’s conclusion focus on advertising. While marketing and outreach to low-income families isn’t the only obstacle to getting them into the mainstream financial system, it clearly needs to be more of a priority, right alongside accessible locations.

Amalgamated Bank, based in New York City, was founded in 1923 by the Amalgamated Clothing Workers of America. On the Take It to the Bank tool, the institution is one of seven that offer eight of eight affordability and accessibility features not related to location or language. Furthermore, nearly a third of its 17 branches are located in areas called New York City Banking Development Districts, defined by the city as being in need of banking services.

Realizing that bank products tend to be commodity products, Amalgamated Bank grounds its marketing and outreach in its values and community relationships.

“Any bank can put out a special rate or play with fees,” says Samantha Berg, Amalgamated Bank’s executive vice president for community banking. “We believe that trust is the key ingredient in banking.” She cites Amalgamated’s history of high-level support for a range of prominent groups fighting on behalf of the city’s poor and marginalized, as well as a strong internal culture of celebrating and supporting branch-level community engagement.

In the Bronx’s Co-Op City, the largest cooperative housing development in the world, where one of Amalgamated’s oldest branches has been for over 40 years, Berg’s department still surveys customers about how aware they are of Amalgamated’s values and associated causes.

“I often find that when companies hide behind gimmicky promotions it is because the brand is not strong enough on its own,” Berg adds.

For its part, the New York City Comptroller’s office has ready-made allies to do outreach to households that could benefit from the new tool: about 200 community-based groups and other nonprofits working on this issue, including those whose input helped them design the tool in the first place. They’ll be ramping up outreach to promote the tool. To encourage more widespread access, Spanish and Chinese versions will launch in the coming months, and additional educational materials will be available in Russian and Bengali.

All language versions of the tool will also remain in beta until further notice, with resources ready behind the scenes to tweak and improve the tool based on feedback from families and advocates.

As outreach ramps up, the tool’s effectiveness in reaching those underserved by financial institutions may provide an incentive to banks. After users select their desired features, language and location as filters, and survey the results, they can easily click through to banks’ websites. The more numerous a bank’s accessible checking account features, the more locations it has, the more languages it can offer, the more likely it will end up with clicks.

Since the tool’s launch, the Comptroller’s office has followed up with a few banks that have already adjusted existing products or shaped new ones to meet the needs of the unbanked. That incentive may be more important than ever before.