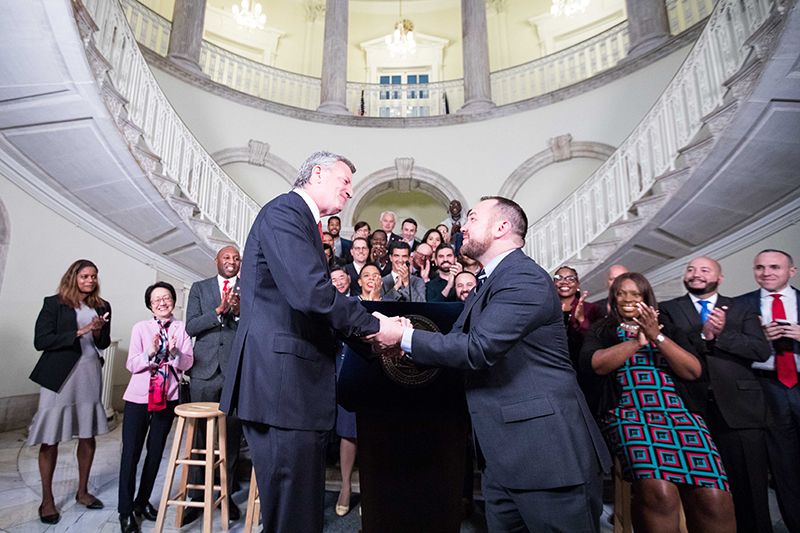 The program, called Fair Fares, will allow New Yorkers whose income is below the federal poverty line to buy MetroCards at half the regular cost, the New York Times reports. About 800,000 people could be eligible for the subsidy, although far fewer are expected to initially enroll. The Community Service Society of New York (CSS), which supported the program, and the advocacy group Riders Alliance, estimate that about 361,000 riders will take advantage of the program, AM New York reports.

One in four working-age, low-income New Yorkers can’t afford MetroCards, according to the CSS, which in 2016 released a report on what it called the city’s “transit affordability crisis” and the challenges faced by the working poor in getting around.

Mayor de Blasio originally opposed funding the Fair Fares program, saying that the richest New Yorkers should be taxed to pay for it, the New York Times reported in a separate story. But to do that would require state approval, and Gov. Andrew Cuomo was unlikely to approve such a measure, the Times said.

“I don’t understand how you can justify subsidizing $6.60 for every ferry ride, but not helping people who live in poverty get on the train,” Johnson told the mayor’s budget director at a hearing, according to the Times. (De Blasio had asked for continued funding to subsidize the NYC Ferry, which carries 3.8 million riders a year to the subways’ 6 million.)

During tense negotiations, the Times said, Johnson “walked out [of the mayoral residence] after Mr. de Blasio offered a much smaller number to finance the fare subsidy.” City Hall disputes the account.

Johnson and de Blasio finally came to an agreement on Wednesday. The $106 million should be enough to pay for the first six months of the program, after which the city will analyze the cost for future years based on how many people sign up, the Daily News reported.

That said, “this is not a one-time commitment,” Johnson declared.

NYC already subsidizes MetroCards for students, seniors, the disabled and 40,000 people who receive cash assistance. The new program will operate in much the same way. The cards are personalized and cost $1.35 per ride, less than half the subway/bus fare of $2.75.

London, Seattle and San Francisco already have fare subsidies for low-income people. Boston and Denver are considering it, the Times said.

The program’s supporters say that not only will it help struggling residents financially, it could also contribute to criminal justice reform if it reduces the number of arrests for fare evasion.

On Fair Fares, he added, “It’s a profound and good and moral ideal. I have felt that from the beginning. The challenge was always how to make it work. The beauty of this idea, in terms of making this the fairest big city in America, it’s going to help so many New Yorkers to reach opportunity that too often is out of reach because of pure lack of resources.”

EDITOR’S NOTE: The original version of this article incorrectly stated the amount of funding requested to subsidize the NYC Ferry. We’ve corrected the error.