New Yorkers Could Get More Swim Time – Next City 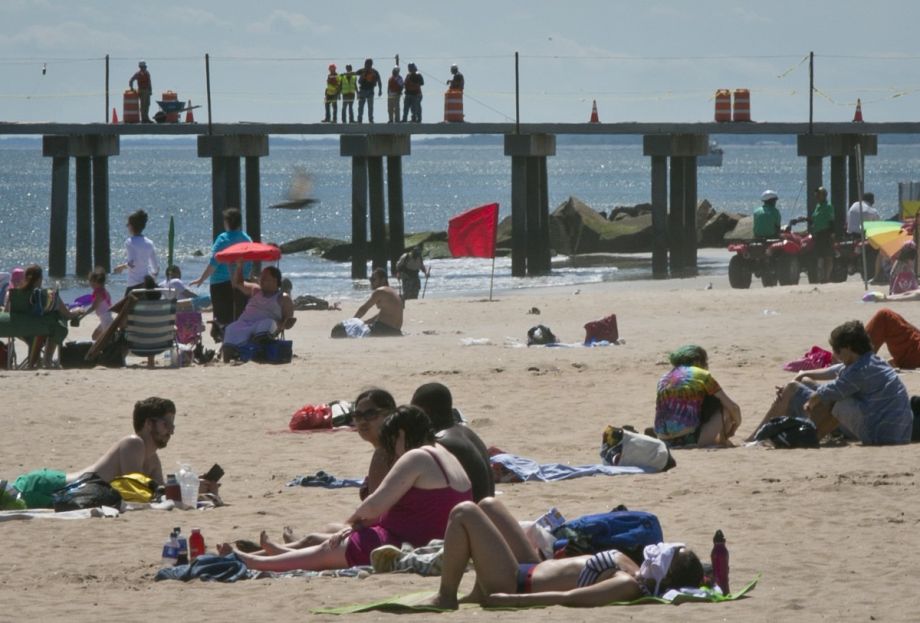 Sunbathers at the beach in Coney Island (AP Photo/Bebeto Matthews)

For many New Yorkers, nothing symbolizes summer more than a scorching day at Coney Island or a blissful swim in McCarren Park Pool. And some are urging the city to make it easier for locals to escape the heat by extending the season of public beaches and pools beyond the typical definition of summer.

With all indicators pointing to warmer temperatures in future years, a bill in the City Council would keep these facilities open every day until the first day of public school and every weekend until the end of September.

Council Member Mark Levine, the bill’s author, says the scheduling change would bring the city beaches and pools, which have a history as democratizing institutions, in line with a post-climate change era.

“The average New Yorker isn’t going to be able to go to the Caribbean for a vacation, or even to the Hamptons for that matter,” Levine says. “To have this wonderful, healthy venue for summer recreation that is just a subway ride away, with no admission cost for everyone, is an incredibly important feature of New York City. We want to extend and expand this wonderful resource by a few weeks.”

The move also recognizes changing work schedules. As more New Yorkers, especially millennials, take jobs outside of the traditional 9-to-5 hours, they have more opportunities to enjoy the sun and splash, Levine argues.

While New Yorkers have always swum in the city’s rivers, the modern pool and beach system dates to the 1930s, a product of federal funding and the brainchild of controversial city planner Robert Moses. At the time, money was flowing from the Works Progress Administration at the height of the New Deal and local waterways were becoming increasingly polluted, while new research extolled the benefits of athletic activity for children’s psychological development.

During the summer of 1936, the hottest on record in the city, Moses and Mayor Fiorello La Guardia opened 11 public pools around New York, one each week. They were marvels of modern engineering at the time, with monumental bathhouses and pump systems that guaranteed sanitary water. Their opening ceremonies, highly promoted in the local press, became major affairs.

“There were people lined up around the block, huge parties and spectacles,” says Maria Gutman, a City College of New York professor who has studied the pool system. On opening day, performers put on aquatic demonstrations and bathers counted down before jumping in.

While the pools gave many everyday New Yorkers easy access to summer recreation, their status as icons of egalitarianism is marred by the fact that many were built in segregated areas. Several of the city’s biggest beach facilities were also built on the edges of the city that were, at the time, mostly white.

“Prior to the civil rights movement, public beaches were only public to white America,” says University of Virginia Professor Andrew Kahrl, who has studied the history of race and beaches in the U.S. “They were practically off-limits to people of color.”

Today, as the effects of climate change become more keenly felt, the importance of public beaches and pools will only grow, Kahrl says.

“There’s going to be increased demand for recreational resources as we begin to live through hotter, drier summers,” he predicts. Moreover, “with growing wealth inequality in America … you’ll see greater demands for expansion of public facilities and a growing privatization of these resources.”

Levine’s proposal has a ways to go before it’s approved.

“We have been examining and exploring the feasibility of this concept. It’s important to note that there are certain factors that could make this a complicated and costly enterprise,” Liam Kavanagh, the deputy parks commissioner, said at a City Council hearing last month. He estimated that keeping all 56 pools and 14 miles of beaches open would cost about $350,000 per day.

The logistics of staffing are especially complicated. About half of the 1,500 lifeguards on duty at pools and beaches are college students who may not be available to work until the end of September.

“Extending the season to September 30th might be overly ambitious,” says Peter Stein, the head of Local 508, which represents lifeguard supervisors. “It’s a matter of safety — we need to be sure there are no corners cut to accomplish this. There needs to be a sufficient number of staff available.”

Solutions could include opening only sections of beaches and pools later in September. Levine says he is optimistic that the city will come up with a workable agreement and that the proposal is cost-effective, considering almost 20 million people visited the beaches and pools last summer.

As long as staffing questions are resolved, collective bargaining rights are preserved, and both beaches and pools are kept open, lifeguards are enthusiastic about the proposal, Stein says.

“There’s a wide spectrum of citizens who use the pools and beaches who don’t have the capacity to go anyplace else to swim,” he says.