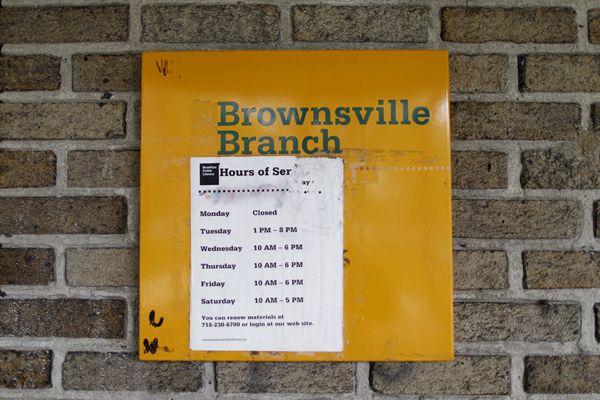 Though libraries are increasingly popular destinations, they are open fewer hours than in the past because of steep funding cuts. Credit: Pearl Gabel/City Limits

Although it is certainly true that technological innovations and the rapidly growing number of services and resources on the Internet have dramatically changed the way we access information, millions of New Yorkers still frequent their neighborhood library branch to check out materials and take part in educational programs. In fact, over the last ten years, as more and more living-wage jobs have started to require advanced training and higher levels of literacy, the demand for library services has skyrocketed.

In 2011, 69 million materials were checked out from New York City libraries, a 59 percent increase from 10 years before, and 2.3 million people attended public programs at libraries, a 40 percent increase. Across the city 48 different branches at least doubled their program attendance in that time, while 18 branches more than doubled their circulation, according to a new report, Branches of Opportunity, from Center for an Urban Future.

However, despite their growing importance as educators, public libraries have been hugely undervalued by policymakers and are absent from most policy and planning discussions about the future of the city.

Since 2008, NYPL has suffered a net $28.2 million reduction in city funds, while Brooklyn and Queens have absorbed cuts worth $18.1 million and $17.5 million respectively.

Due to these funding reductions, all three systems have had to reduce their hours of operation to an average of five days a week, down from six days a week in 2008. Even the Detroit public library system stays open longer. The three New York City public libraries are open 43 hours a week on average, compared to roughly 50 hours a week in Chicago and Boston, 55 in
Toronto and 70 in Columbus.

“With over 200 branches across the city and only enough funding for them to stay open 40 hours a week, there’s a lot of infrastructure here going unused,” says Queens president Tom Galante.

If one had to choose the most underappreciated thing libraries do, skills-building and career development would top the list. In the city budget, libraries get grouped with cultural institutions, not education providers or workforce development organizations, and most people — at least if they are middle-class and well educated — seem to associate public libraries with children’s books and story time and little more. But for literally millions of New Yorkers libraries are the first place to go to pick up marketable skills, polish a resume or search for job openings online.

At the High Bridge branch in the Bronx, for instance, patrons come in and spend a whole day searching online job boards, according to the head librarian there. “I get questions about online job applications all the time,” she says. “Recently I helped a waitress apply for a job at a restaurant. Nowadays, no matter what kind of job you’re looking for, you need access to a computer.”

Most branches in New York offer informal workshops on how to write a resume, how to improve a resume by adding basic skills such as Microsoft Office and how to present oneself in a job interview. Libraries also have begun to do a lot more outreach with teenagers and disconnected youth, providing career counseling and part-time volunteer opportunities. And, since last fall, four branches in the Bronx, Brooklyn and Queens have even begun to offer job placement services through the city’s Workforce1 Career Centers.

When it comes to skills-building and career counseling for adults and young adults, libraries have several important assets. Number one is accessibility: With 206 branches, the library systems have a footprint in almost every neighborhood in the city, and because they already serve a diverse population, they are able to reach people who don’t know about or don’t trust other service providers.

Libraries also have the advantage of offering a range of resources and services to advance and support in-class instruction. Students in library-based classes are encouraged to supplement their learning with other library resources, whether it’s checking out a laptop to take practice questions for the GED or working one-on-one with volunteer tutors. “Everything we have here makes you want to linger and put what you learned in class to work,” notes Ken English, the director of adult literacy at NYPL.

If libraries are going to fulfill their potential as engines of upward mobility and take advantage of opportunities afforded by the Internet, they will need far greater financial and institutional support than they have received so far.