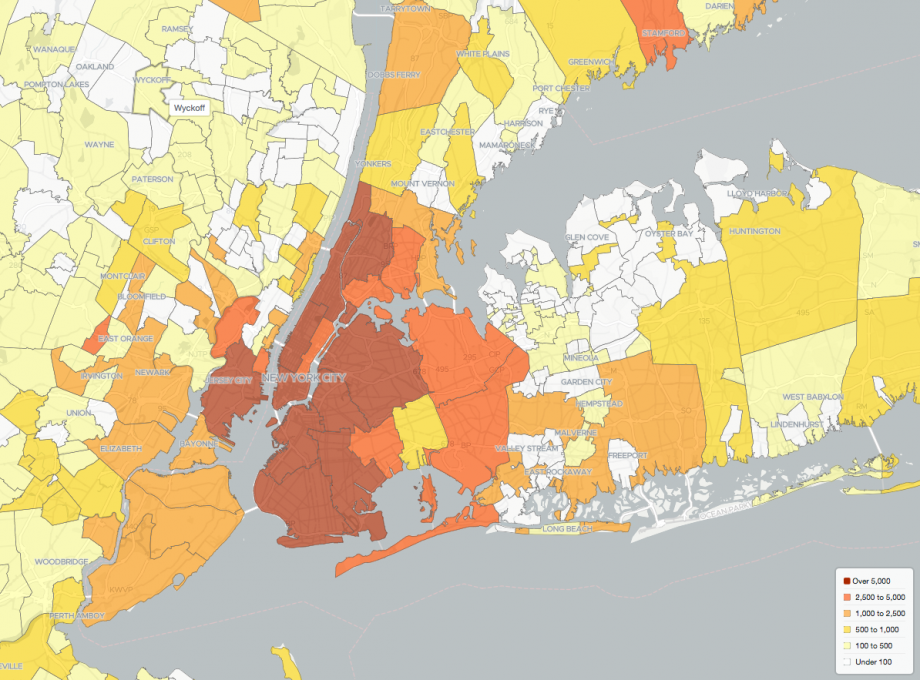 The NYC Department of Planning's new tool includes this map showing new housing units permitted from 2010-2016, revealing that new housing has been heavily centralized in the NYC region. While in line with population growth and shifts in the region trending toward the center, new housing production has not kept pace with population.

New York City’s planning department has launched a new mapping tool that harnesses population, housing and economic data and makes it available for exploring by the general public.

The Metro Region Explorer offers trending data on the city’s greater metropolitan region: the five boroughs, upstate New York and Long Island, as well as parts of New Jersey and Connecticut. Collectively, the region is home to 23 million people and the largest foreign-born population in the nation.

In a release, the city said that the Metro Region Explorer “will help New Yorkers understand the City’s relationships, including interdependencies, to areas outside our borders. It enables the public, planners and policy makers to examine the regional context for shared planning challenges. It is the only mapping resource that combines municipal population, housing and economic data across our region.”

The map doesn’t propose policy solutions, but the data it provides will be helpful for planning policy in the years ahead. “It is extremely important when planning for our individual municipalities that we look at the entire region,” Annisia Cialone, director of the Division of City Planning for Jersey City, said in a statement. “Key issues such as housing and affordable housing specifically, transportation, and economic development have impacts beyond our borders.”

The map tracks population density and in/out-migration, housing trends, and changes in the labor market since 2000. It uses all publicly available federal datasets “that have been processed and/or analyzed” by the Department of City Planning, according to the site. The app has data going back to the year 2000, but focuses on 2008-2017, the Gotham Gazette reports.

The population trends show that while New York’s suburbs have typically operated as a “relief valve” for the city’s housing supply, fewer people are leaving the city, which accounted for 60 percent of the region’s population growth since 2010, according to the map. All five boroughs have added jobs faster than they’ve added housing; the city added nearly half a million jobs post-recession. Meanwhile, suburbs such as those in New Jersey have more housing, but fewer jobs in some places.

“We don’t think that can continue forever,” Carolyn Grossman Meagher, director of regional planning at the DCP, told a business group Tuesday, according to the Gotham Gazette. “In other words, as a New Yorker, it is becoming less of an opportunity for me to avail myself to economic resources outside the city because the job growth just isn’t there.”

​In addition to shining a light on the need for additional housing in the city, the trends also underscore the importance of maintaining transportation infrastructure, both in and outside the city.

The regional planning division of the Department of City Planning was formed at the recommendation of Mayor Bill De Blasio’s OneNYC plan. One of the goals of the plan was for the city to think regionally. The city “has, and is dependent on, a regional ecosystem,” Grossman Meagher said.