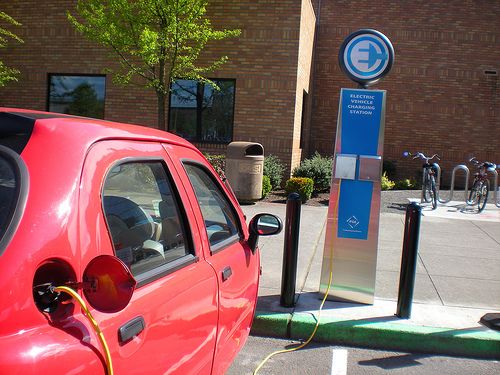 Two of the country’s premier East Coast cities are using this summer to get a jump-start on progressive plans for environmentally conscious transit. Last week on July 14, New York City, in partnership with HUD Secretary Shaun Donovan and Coulomb Technologies CEO Richard Lowenthal, announced the installation of the first of the 100 electric-vehicle charging stations that the city plans to install this summer. In Washington D.C. this week, Capital BikeShare, a city funded program, announced the locations of its 100 anticipated bike share stations, set to be in use this fall.

The metropolitan New York City area will receive 100 of the proposed 4,600 charging stations. Mayor Bloomberg attributes the country’s lacking electric vehicle use to a chicken-and-the-egg scenario, in which consumers do not buy electric vehicles because the infrastructure is not there to support them and the infrastructure is not built because the demand is not there to support it. Bloomberg hopes ChargePoint America will change this, and the city plans to promote demand for both vehicles and infrastructure by adding electric vehicles to its SCOUT fleet, which monitors street conditions, and through continued promotion of gas-electric hybrid taxis.

Plans for increased green-transit infrastructure were announced in Washington D.C. as well. In D.C.’s case, this week’s announcement unveiled 100 proposed locations for Capital BikeShare bicycle pick-up/drop-off stations. Capital BikeShare, a city-funded program, has been created in response to the high demand for shared bicycles generated by the Smartbike DC program. Smartbike DC, which when launched in 2008 was the first bike-sharing program of its kind, met such success that the District Department of Transportation decided to expand the program by creating Capital BikeShare.

The initiative aims to have the 100 pick-up/drop-off stations running by this fall. The stations will make 1,000 bicycles available to city residents and visitors alike at membership rates of $80 per year, $30 per month or $5 per day. Members will be able to pick up a bicycle at one station and return it to one of the 99 others located around the city. Concentrated downtown and at strategic points, the locations are intended to help fill the gaps left by transportation options that are lacking or overcrowded.

As both Capital BikeShare and ChargePoint America aim to establish infrastructure that can be used long term, they hope to set an example for the rest of the country. Already ChargePoint has plans to operate stations in Washington state, California, Texas, Michigan, Washington D.C. and Florida, and Capital BikeShare is using Bixi, a public biking system also used internationally and nationally in Arlington, VA and Washington State University. With major progress being made this summer, it appears both programs have the momentum to make change in their cities and promote it across the country.