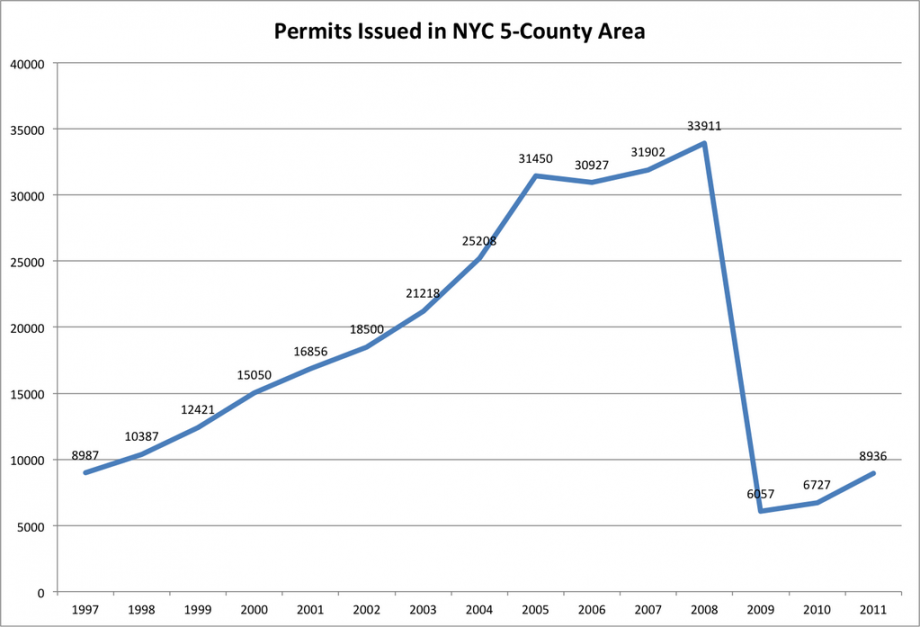 Graph by Chris Goodman, data by the Census Bureau.

Yesterday at The Atlantic’s CityLab summit, New York City Planning Department Director Amanda Burden caused somewhat of a stir with a few blunt remarks about gentrification and her inability to stop it.

“I had believed that if we kept building in that manner and increasing our housing supply… that prices would go down,” Burden said, according to Sarah Goodyear at The Atlantic Cities. “We had every year almost 30,000 permits for housing, and we built a tremendous amount of housing, including affordable housing, either through incentives or through government funds. And the price of housing didn’t go down at all. That’s a practitioner’s point of view.”

Her statement could be seen as a rebuke to those who have argued that New York’s housing woes are a basic problem of supply not meeting demand — an argument beloved by economists (and even a certain left-leaning mayoral candidate) and generally dismissed by affordable housing advocates. But Burden got at least one basic fact wrong.

Furthermore, permit data overstates the amount of actual construction, as not every unit permitted is ultimately built. From 2000 through 2008, 225,000 units were permitted. Only 170,000 were actually built, according to New York University’s Furman Center for Real Estate and Urban Policy.

According to classical economic theory — which Michael Bloomberg and his administration once embraced, but which Burden now seems to now doubt — it’s not supply that staves off price increases, but supply meeting demand. Demand for housing in a particular city can be difficult to estimate, but New York hasn’t gotten any less desirable compared to the rest of the U.S. over the past decade. It seems reasonable to assume that at a minimum, the demand for housing is equal to the nation’s population growth rate. (In reality, New York would almost certainly have to build more than this to keep up with demand, both because of its rising “stock” and because of its suburbs’ even more pitiful housing production numbers.)

If New York City’s housing stock had been growing at the same rate as the national population, the city should have added more than 30,000 units each year. In other words, the city should have kept up its boom-time growth for Bloomberg’s entire administration, rather than just the four or five most exuberant years.

It’s certainly possible that allowing “tremendous” amounts of development, in Burden’s words, would not be enough to stave off price increases and gentrification. But we can’t know that until we actually try. Until now, New York City hasn’t tried.