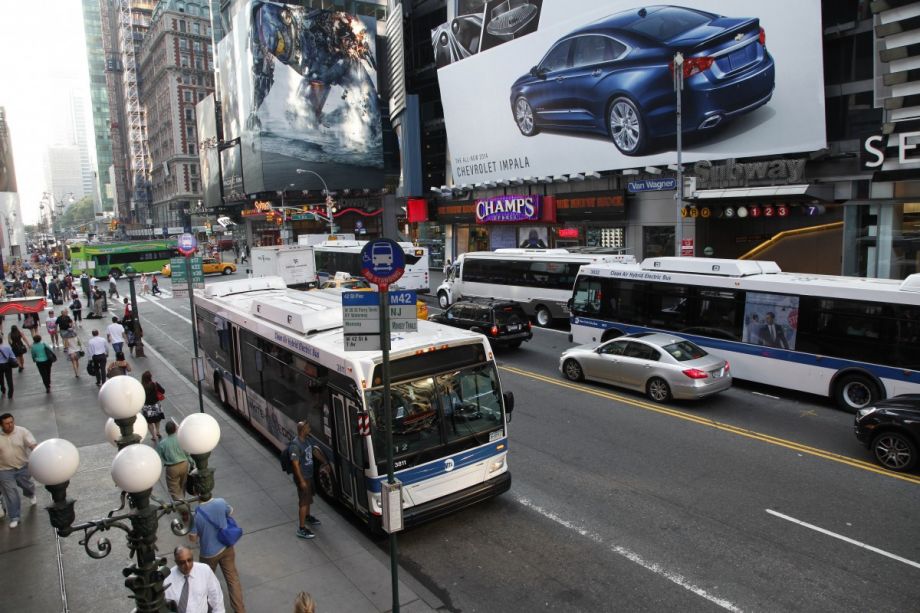 In July, there was the 7 train that got stuck under the East River for 30 minutes before turning around and heading back to Queens, stranding passengers for another hour. In June, there was the F train that lost power and trapped riders for 45 minutes in the hot, dark cars. Later that month, another F train was stuck so long between stations, two passengers hopped off and walked to the exit. With New York’s aging, beleaguered subway suffering more delays, more track fires, more breakdowns, Metropolitan Transportation Authority’s (MTA) chairman announced plans to overhaul the system.

A group of transit advocates, including TransitCenter, Riders Alliance, Straphangers Campaign and Tri-State Transportation Campaign, wants to see MTA and the NYC Department of Transportation do the same thing for buses, which are also slow, often unreliable and losing riders. Whereas subway ridership has remained nearly flat despite the problems, average bus ridership dropped a little over 2 percent in the first half of 2017 compared to the same period last year. That’s over 1.6 million fewer rides per month.

In July 2016, these advocates launched the Bus Turnaround Coalition and released a report outlining steps that MTA and NYCDOT could take to improve bus services. They include: creating bus-only lanes and transit signal prioritization, redesigning the bus network to improve frequency and efficiency, implementing off-bus payment for quicker boarding, using technology to ensure buses get dispatched on time and don’t get bunched next to others on the same route, and making bus use more intuitive with better route names and real-time arrival signs at stops.

“The problem really is systemic,” says TransitCenter’s Jon Orcutt. “These things that we’re recommending for the bus system are orders of magnitude cheaper than fixing the subway. I don’t understand why there isn’t more motivation to find the quick wins.”

Last week, the Coalition published a Bus Turnaround report card that grades MTA and DOT’s improvements over the past year. If they were students, their parents would not be pleased.

On prioritizing streets for buses, DOT gets a D+. The report knocks them for only opening two blocks of new bus-only lanes so far in 2017 and for only planning to implement transit signal prioritization (which can speed up bus trips by as much as 30 percent) on 15 more routes by 2020. To date, the city has implemented the technology on five routes.

MTA gets a B- for its bus network and route redesigns, the highest grade on the report. They get credit for launching a new express bus route on Staten Island and splitting the M5 route into two smaller routes. The report calls for MTA to change its standard spacing from 750 to 1,000 feet apart. They argue the close spacing slows down buses unnecessarily. The report says: “In reality, bus stops in NYC are commonly even closer than our service guidelines dictate; there are places where buses stop twice on a single block!”

The worst grade on the report card goes to MTA, which gets an F for adopting methods to keep buses on schedule. The Coalition argues that thanks to GPS tracking, MTA should be able to dispatch buses in a way that would keep them on schedule, or adjust buses while on a route to prevent them from bunching up at stops. Admittedly, it’s frustrating to wait for a late bus only to have two or three show up at the same time.

An MTA spokesperson writes in a statement: “Every bus in our system can be tracked with GPS and customers can access this information on the MTA Bus Time app. The same data we use for the app we use to monitor bus schedule and service to help mitigate issues that may arise on the road in real time. Installation of a new fare payment system, which is being worked on, will also speed up boarding.”

On that last point, both MTA and DOT get an incomplete. The Coalition wants to see MTA implement off-bus payment to allow all-door boarding. Doing so has proven to reduce delays in cities such as San Francisco where it’s used systemwide and on New York’s Select Bus Service routes.

Despite the bad grades, Orcutt is optimistic that progress is coming, if not at the pace needed to stem the loss of riders.

“The conversation is going in the right direction. Just need to translate it into much more concrete and ambitious action,” he says. “Riders are continuing to abandon the system as these agencies gather their very small momentum on this.”