In New York, a Neighborhood Makes a Pre-Gentrification Plan – Next City

In New York, a Neighborhood Makes a Pre-Gentrification Plan 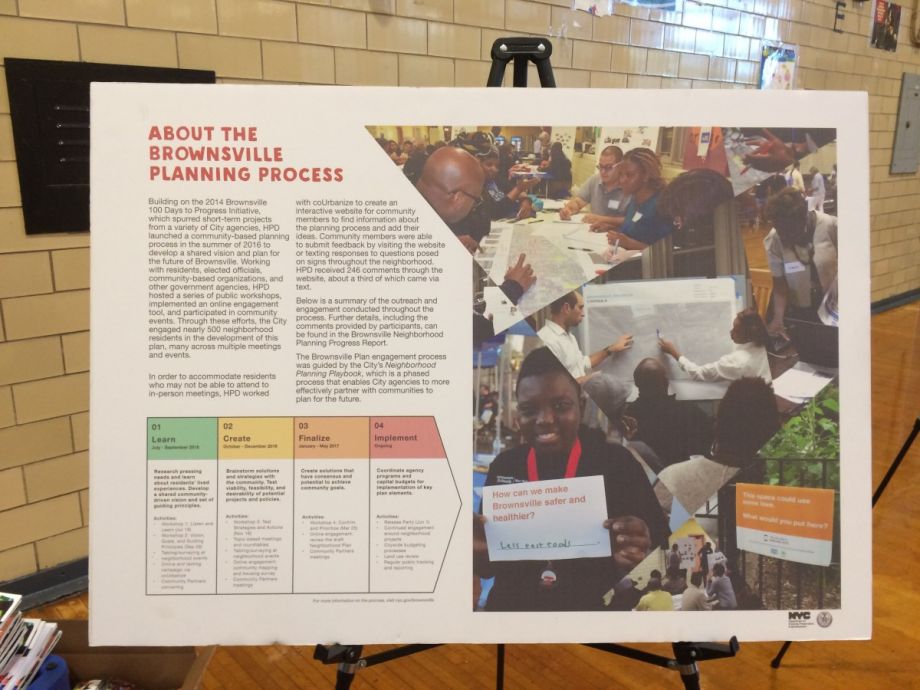 Residents, city staffers and elected officials gathered earlier this month in Brownsville, Brooklyn, to celebrate a new neighborhood plan that comes after a year of community engagement involving the New York City Housing and Preservation Department and nearly 500 residents and neighborhood groups.

The plan includes goals to increase affordable housing and improve residents’ health and safety, and envisions Brownsville as an arts hub for New York City.

The blueprint also sets an expectation for community-focused economic development that would mean lower unemployment and a boost for entrepreneurship, and there are at least three retail and jobs initiatives in the works to help.

Brownsville has historically been one of the poorest neighborhoods in New York City. The median household income was $25,041, much less than the citywide $52,737, according to the U.S. Census 2010-2014 American Community Survey. About 36 percent of residents live below the federal poverty line. The unemployment rate in Brownsville was over 15 percent, about 5 percent higher than the city average, according to that ACS.

According to the Brownsville plan, the Brownsville Community Justice Center (BCJC), a youth justice organization, along with Hester Street Collaborative and Made in Brownsville, will explore “potential projects [that] could address placemaking, business attraction and retention, merchant organizing, or other needs identified on the Belmont Avenue corridor.”

BCJC has been focused on the Belmont Avenue commercial corridor since 2014, organizing youth cleanups and a monthly street festival that brings increased foot traffic. The new Brownsville plan brings energy to expanding such efforts.

“We believe that the community already has everything we need to make it better,” says Erica Mateo, director of community-based initiatives at BCJC. “I feel like we’re one of the last frontiers for gentrification. We don’t want our work to be co-opted.”

With community planning comes challenges. As they continue to improve Belmont Avenue, Mateo says they plan “to keep the cultural significance” of Brownsville.

Some of it comes down to communication about changes, Mateo says. For example, people were impressed with the 3 Black Cats, a cafe on Belmont opened by three sisters from Brownsville last summer. But, Mateo says, residents were saying, ‘it’s so nice’ — and weren’t sure if it was for them.

Hester Street Collaborative is looking at data about this particular section of Brownsville to see where people are spending money and inform what types of businesses have the potential thrive on Belmont. The 4-block area currently has some empty storefronts and buildings in need of facade improvements.

“Sometimes looking at data and maps helps you step back and plan more wisely,” Mateo says.

Quardean Lewis-Allen, founder and CEO of Made in Brownsville, another partner in the revitalization effort, has a location on Belmont, and Mateo says that’s been helpful in planning.

“Economic development is also about creating things,” says Genese Morgan, chair of Brooklyn Community Board 16, which represents the Brownsville and Ocean Hill neighborhoods. “We need a reason for people to come into our community. We’ve been going outside of our community for so long.”

The hope is that when people visit Brownsville, they will also spend money there, enabling businesses to survive and thrive. But first, business ventures need to be set up for success.

One solution: finding a space for entrepreneurs without the obligation of a five- or 10-year lease. That’s the idea behind the innovation and entrepreneurship space at the intersection of Glenmore Avenue and Mother Gaston Boulevard, which is also promoted in the Brownsville plan.

The Central Brooklyn Economic Development Corporation (CBEDC) is also helping businesses build capacity. Its Brownsville Gateway incubator trains startups in the community with operating budgets of less than $25,000. They get business training and a chance to pitch to investors. One such outfit: We Run Brownsville, which encourages women living and working in the neighborhood to take ownership of their physical, mental and emotional wellness.

“You can’t avoid [transplants] coming into your neighborhood, but you can do something about how much ownership you have,” La’Shawn Allen-Muhammed, executive director at CBEDC told BK Reader in 2015. “Even if we concentrate on specific areas within the district, I think that’s the way to go.”

With a new Brownsville plan being celebrated, Allen-Muhammed emphasizes that mission today. “We’re really adamant about supporting our local residents and businesses,” she says. “So that once the community changes, they’re still here.”