One Solution, Many Winners in Idea for Affordable Space for Artists – Next City

One Solution, Many Winners in Idea for Affordable Space for Artists 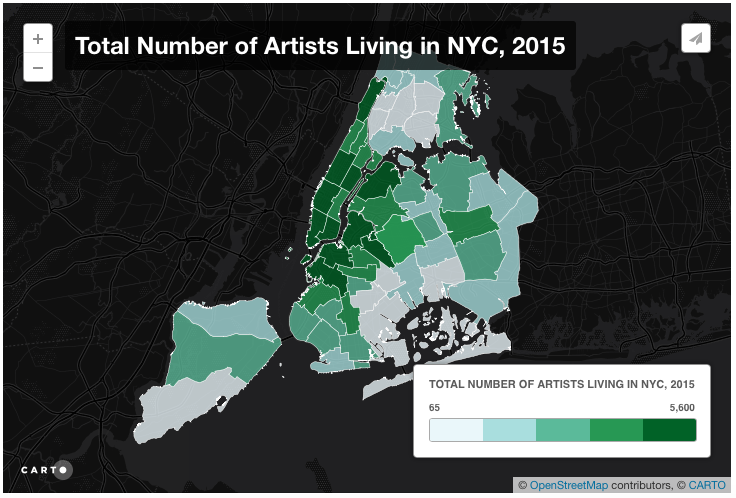 Rising rents are forcing artists out of New York City en masse — or so the classic gentrification tale goes. But the reality is more complicated, according to a new paper from Center for an Urban Future.

“In the face of rising rents and other costs throughout the city, our new analysis shows that the number of artists nonetheless grew in nearly every discipline, borough and neighborhood between 2000 and 2015,” the authors (Adam Forman, Matt A.V. Chaban and Jonah Bleckner) write. “Citywide, the ranks of artists swelled to 56,268 in 2015, an all-time high, marking a 17.4 percent increase since 2000.”

But that doesn’t mean being an artist in New York City is easy (as Deonna Anderson recently explored in detail for Next City). The CUF paper looks at two trends that highlight the strain of making art in an out-of-control housing market: a shortage of workspace, and the large-scale redistribution of artists — not out of NYC, but across it.

According to the Center’s latest analysis, there are not only more artists in New York, there are more artists all over New York, many of whom are struggling to get by. CUF’s analysis shows that the artist population increased in nearly three-quarters of the city’s Census-defined neighborhoods since 2000, including massive jumps in Brooklyn and the Bronx, as artists seek more affordable space further from Manhattan. The analysis finds that most of the growth in the artist population is occurring in Brooklyn, Queens, and the Bronx — although Manhattan continues to house more artists than the next two boroughs combined.

But as artists fan out across the city, they “often find themselves living further from the work spaces, exhibition spaces and collaborators on which their work relies,” according to the paper. One potential solution (also, conveniently, spread across the city): public schools.

There are 1,456 visual arts rooms, 1,439 music rooms, 1,412 theater spaces, 1,425 dance studios and 1,415 film production and editing facilities in the Department of Education’s 1,800-plus schools. After school hours, most are unoccupied — except for storage. Opening up these spaces to local artists could help address the massive need for studio space while strengthening arts education and exposure in neighborhoods and schools that could benefit enormously from a more deeply embedded arts community.

In fact, if you look at public schools, Brooklyn, the Bronx and Queens have more “visual arts rooms” than Manhattan. And while liability issues and custodial and utility expenses could all be hurdles, the paper recommends a City Hall-based approach. Mayor Bill de Blasio’s administration “could work with local foundations, borough presidents and Spaceworks, a nonprofit that develops affordable studio space,” or the Department of Cultural Affairs might recruit funders or partner with the Department of Education. 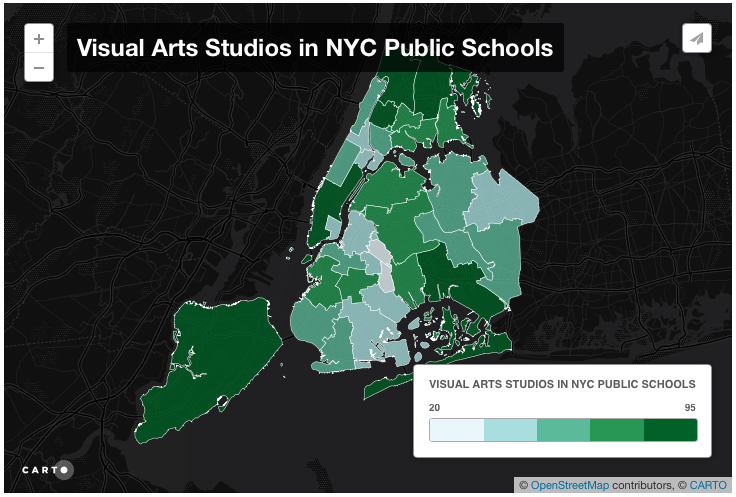 While a number of cities have tried to keep their supply of artists through creative housing measures, Chicago has taken a similar approach to what the authors of the Center for an Urban Future paper suggest, but with public park space. The city’s parks are home to field houses, public buildings “often already equipped with arts amenities like wood shops, ceramic studios and auditoriums,” as Jen Kinney wrote for Next City in 2015. Thanks to a partnership of the Chicago Park District, the Department of Cultural Affairs and Special Events, and nonprofit technology company Fractured Atlas, an inventory of those spaces went online that year, and allowed artists to search for spaces they could rent for performances, rehearsals and exhibitions.

The full Center for an Urban Future report can be read here.