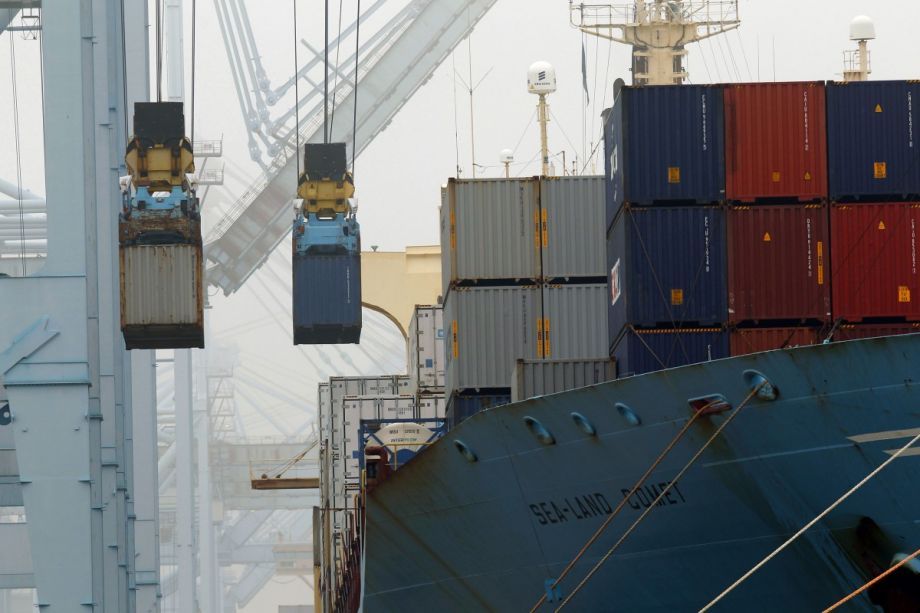 Containers are unloaded from cargo ships in the Port of Los Angeles. (AP Photo/Nick Ut)

Reyes Castellano has been driving cargo in and out of the Long Beach, California, port for 15 years. The 58-year-old has always had to put a big chunk of his paycheck toward covering repair and maintenance costs for his vehicle, but ever since K&R Transportation, the company he works for as an independent contractor, asked drivers to switch out their diesel trucks for ones powered by clean diesel and natural gas, his expenses have gone through the roof.

“Since I’ve had that truck I’ve spent about $30,000 in repairs,” says Reyes, who’s listed as the owner-operator of his vehicle. Last year, he says he made $74,000, but after deducting all the expenses he put into his work, he brought home $24,000. “Filter gets warped, turbo goes out, repaired the transmission a couple of times — they get so hot in there, like there’s no insulation or nothing.”

But what gets him the most is that he’ll spend anywhere from eight to 10 hours some days just waiting for companies at the port to ready their shipments. That’s time on the job that he’s not getting paid for, and that’s why he and a few dozen other drivers decided to go on a two-day strike at ports in Long Beach and Los Angeles on October 25.

“I always worked hard my whole life, always worked hard, never depended on the government for nothing, always worked hard but then never asked for anything. Never been on food stamps, or welfare,” he says. “I’m hoping … they can be responsible for the repairs on the truck, and so I can get some free time and some holidays and paid vacations, and get a little break from all of these non-paid hours.”

On the same day these drivers took up picket signs, fair wage advocacy group Good Jobs Nation debuted the first-ever national hotline for federal contract workers like Reyes to call and report wage theft violations. Workers who call 1-844-PAY-FAIR are prompted — in English and Spanish — to leave a message detailing their contact information, where they live, what company they work for and why they think they’re a victim of wage theft. Good Jobs Nation will verify that the named companies are in fact contracted by the federal government, get in touch with the worker and start an investigation to see whether or not the wage theft claims hold water in court.

And Castellano was one of the first workers in the country to give the hotline a call.

Paco Fabian, an organizer with Good Jobs Nation, says the idea sprouted from a complaint his organization filed to the U.S. Department of Labor in 2013 that alleged a great irony: Some low-wage workers employed by eight contractors within Washington, D.C.’s most prestigious buildings were getting paid below minimum wage, and the companies were avoiding paying out extra for those who worked overtime.

“If this is happening in places like the U.S. Senate and Ronald Reagan Building and Smithsonian building, right under the nose of the lawmakers that are supposed to be enforcing these laws, then [it’s] probably happening everywhere, and probably on a large scale,” says Fabian. An estimated one out of every three of the 2 million workers employed by federal contractors are victims of wage theft, according to the National Employment Law Project. Among 567 federal contract workers interviewed by that organization, three out of four reported earning less than $10 an hour, and 58 percent received no benefits at all.

There are approximately 15,000 port truck drivers in California, with the vast majority of these working at the Los Angeles and Long Beach port systems that make up the largest port complex in the country. Only 20 percent of the drivers working at these ports are contracted as full-time employees. Those who aren’t have gone on strike at least 14 times over the past three years, with the hope that getting federal departments like the Department of Defense to recognize wage violation claims against its contractors will help set a precedent for contractors working with federal offices across the country, according to Barbara Maynard, a spokesperson for Justice for Port Drivers.

“It’s been known for decades that these workers [in the Los Angeles and Long Beach ports] are misclassified, and how that has been handled is that episodically a worker would submit a wage claim to California’s Department of Industrial Relations, and they would come in and say ‘Hey, your workers are actually employees, you gotta reclassify and pay these taxes,’” says Maynard. “But there was no change that came from that. A lot of companies in some respects thought it was just cheaper to pay the fines than to change their business model.”

There have been movements at the federal level to try and shift this structure. The most recent one was President Barack Obama’s Fair Pay and Safe Workplaces executive order, which was signed in 2014 and took effect Oct. 25.

Part of the order, however, was blocked last minute by an injunction led by a Texas judge and plaintiffs with the Association of Builders and Contractors, a major trade association. They took issue with the order’s requirement that businesses disclose past wage theft allegations if they want to qualify for federal contracts worth more than $500,000.

Allegations need only be allegations, and Judge Marcia Crone said that stipulation “violate[s] the due process rights of plaintiffs’ government contractor members by compelling them to report and defend against non-final agency allegations.”

The order’s requirements that business owners submit detailed hourly earning reports for each of their workers will still come into play. As the Department of Labor prepares to appeal the ruling, federal contract workers like Castellano are hopeful that tools like 1-844-PAY-FAIR will bring their voices a bit more into the political atmosphere in Washington, D.C.

Being able to clock those extra hours for a wage would mean a world of difference for his son, his wife and her aging mother. “They help out with bills because they see I work so hard, and say ‘Oh I’m going to pay this bill’ or ‘I’ll get it this time’ — toilet paper, laundry, soap, all that stuff’s expensive, you know,” says Reyes. As they struggle to pay bills, he says his contractors are “using me to fill up their pockets with money, while all the money I make — I just have to put it back into my truck.”