These Maps Show How Uneven the U.S. Banking System Is – Next City

These Maps Show How Uneven the U.S. Banking System Is 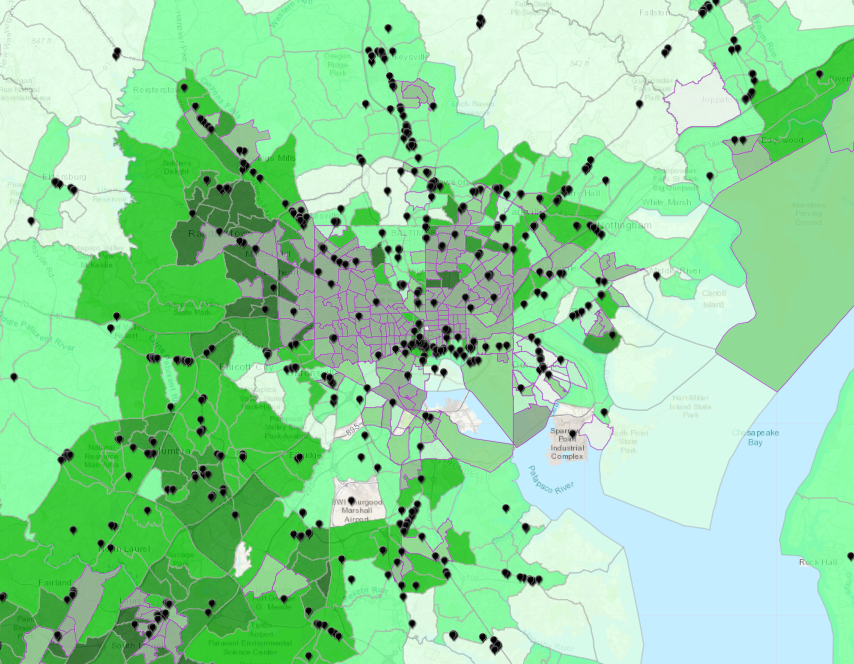 Picture the U.S. financial system. You may see money — green, maybe a little faded and wrinkled, but vital nonetheless. Or maybe the image that comes to mind is plastic — shiny, fancy and colorful on one side, boring fine print on the other. Maybe it looks like a smartphone app. All of these connect us to the system and the services it provides, but they aren’t quite the system itself. Now, there’s a new way to envision the financial system — and how it has been manifested in the built environment — and it’s a tool that will be useful to advocates fighting for community investment in U.S. cities.

Today, the National Community Reinvestment Coalition (NCRC) has unveiled a new online tool that maps the location of every federally insured bank branch in the U.S. For each location, the map also shows the name of the bank, its metropolitan statistical area, and — crucially — how much in deposits that branch holds. Pick a neighborhood, any neighborhood, and zoom right in to see where bank branches are, and where they aren’t. The absence of bank branches can reveal as much about the financial system as their presence.

All told, commercial bank branches currently hold $11.6 trillion in deposits, a number that goes up every year, even as the number of banks and bank branches falls. They’re not the only part of the financial system, but they’re a huge part, and now we can finally see where those deposits are in relation to our streets, our neighborhoods, our cities.

The data comes from the Federal Deposit Insurance Corporation (FDIC), of which practically every commercial bank is a member. It’s public data, freely available and updated annually, every June. The FDIC’s online bank branch database is chock-full of information like deposits held in each branch, the history of each bank including name changes and mergers, opening dates, and current and former owners. But, as you might expect, the database is quite clunky and not at all visual. It can be downloaded, for years going back to 1994.

NCRC did just that, going back specifically to 2008, to be able to map out exactly which areas of the country lost or gained bank branches since the financial crisis and subsequent Great Recession. Along with the online map, they released a report, “Bank Branch Closures from 2008-2016: Unequal Impact in America’s Heartland,” which also focuses on the alarming growth of banking deserts in rural areas.

That’s not necessarily a surprise, as online and mobile banking and millennial consumer habits take hold; in one survey of 1,500 millennials, 74 percent said they visited a bank branch once a month or less, including 38 percent who said they never visit their bank branch.

Nor is it a surprise, really, that the losses were uneven. Several metropolitan areas lost 15 to 25 percent of their bank branches, the hardest hit being Baltimore County, which lost 25.2 percent of its bank branches from 2008 to 2016. 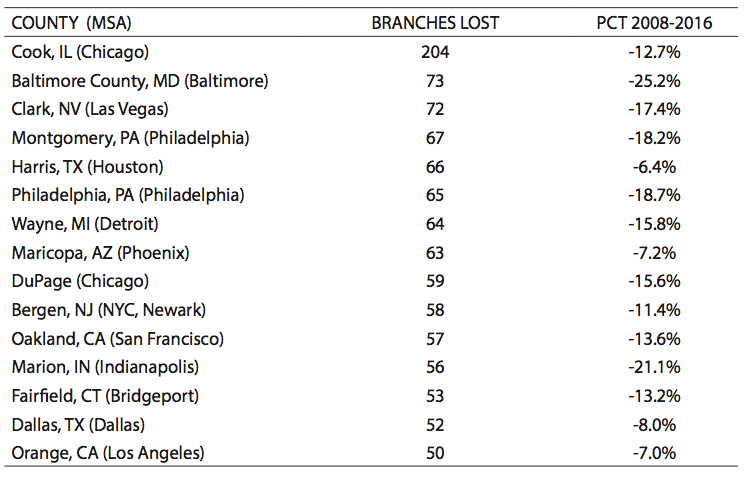 To help illustrate what’s been happening, NCRC’s online tool shades areas red for having lost branches and green for having gained branches, bolder indicating steeper losses or gains. There wasn’t much good news at all for Baltimore:

As with all of its research, NCRC provides data to give its members power and leverage as grassroots organizations watching over the nation’s financial system. The data is vital especially when negotiating community reinvestment plans as a result of a bank merger or a failed Community Reinvestment Act (CRA) exam. (The CRA is intended to hold banks accountable for meeting the needs of everyone in the communities where they do business.)

Last year, NCRC members negotiated three community reinvestment plans, leading to $62.6 billion in lending commitments to low- and moderate-income census tracts identified during negotiations with banks. Part of the CRA’s power derives from the principle that if banks are stewarding a community’s deposits, it should meet the credit needs of that community.

“The reality was, the data really drove and disarmed what could have been an antagonistic process,” said Hector Hernandez, executive director of Southwest Economic Solutions, for my coverage of last year’s community reinvestment plans. “What lending is happening, where are deposits, what community development loans are they making.”

A negotiation may start with how much in deposits are in a given metropolitan area. Let’s say Houston, which has around $218 billion in FDIC-insured deposits at 1,482 branch locations. Now anyone can easily see where those locations are, in one glance. The pattern is as striking as it is predictable:

While banks are facing real pressures to close down branches, physical locations are still vital for two key populations: more vulnerable populations like the elderly, who may still prefer a physical location versus a smartphone app, and small businesses, which still need to routinely make large cash deposits or make change. Small businesses in lower-income census tracts especially are more likely to have customers that rely on cash. What happens if everyone comes in with only $20 bills because that’s the only thing you can get out of an ATM? If there’s a branch nearby, it’s easy to send an employee for a quick run to get some change.

One surprise: Overall, according to NCRC, the rate of bank branch closures was not affected by income census tract level. In other words, there was not a clear pattern showing banks were more likely to close branches in low- to moderate-income census tracts. That may be due to banks’ robust Community Reinvestment Act compliance departments, making sure that banks overall are careful enough to close branches purely due to economics, without favoritism toward wealthier areas, which would get them in trouble with regulators. But of course that does nothing to correct the historical favoritism toward starting branches mostly or only in wealthy areas in the first place.

Looking at Manhattan, for instance, the uber-wealthy Upper East Side and historically working-class East Harlem both gained and lost bank branches in different stretches. But the overall density of bank branches clearly follows the same predictable pattern as the income levels of these two adjacent neighborhoods:

Most importantly, when it comes to demanding fairer community reinvestment, advocates can combine the maps with other existing data sources to see if banks are truly serving the needs of everyone in the neighborhoods whose deposits they steward. For instance, in the South Bronx, Bank of America has two branches, holding a total of $91.6 million in deposits. Here’s one of them: 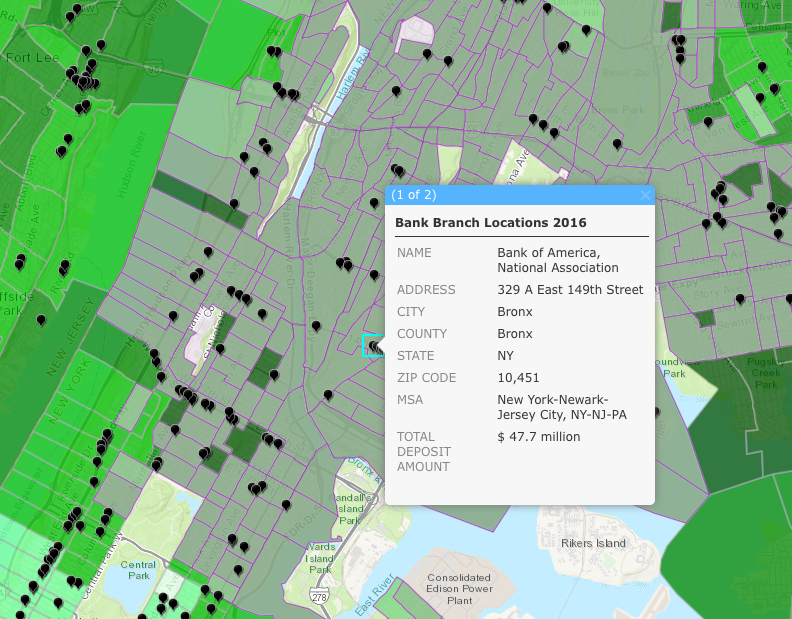 But who is Bank of America lending to in the Bronx? People of color are 77 percent of the Bronx’s population and median household income in the Bronx is $34,299.

Using Home Mortgage Disclosure Act (HMDA) data from the Consumer Financial Protection Bureau, you can find that Bank of America made 53 home loans in the entire Bronx in 2015, for a total of $20,278,000. Of those 53 home loans in the entire Bronx, 27 went to white borrowers, 11 went to black borrowers and 10 went to Latino borrowers. The average borrower income was $102,602. So, deposits held in the South Bronx are benefiting mostly wealthier, white homeowners in other parts of the Bronx.

You can also see via Federal Financial Institutions Examination Council (FFIEC) data that, in 2015, Bank of America made 674 small business loans for a total of $18,896,000; of those, 453 loans totaling $5,201,000 went to small businesses with less than $1 million in yearly revenue. As the chart below from the FFIEC shows, many of these loans were made to businesses located in low-income census tracts, though it’s not clear what were the demographics of the actual borrowers — or their employees, if they had any.

Section 1071 of the Dodd-Frank Act requires the Consumer Financial Protection Bureau to begin collecting race and gender data for small business lending, similar to HMDA data, but it has yet to implement the ordinance. There were hints last year that it would soon start doing so. The CFPB is holding a hearing tomorrow on the topic.