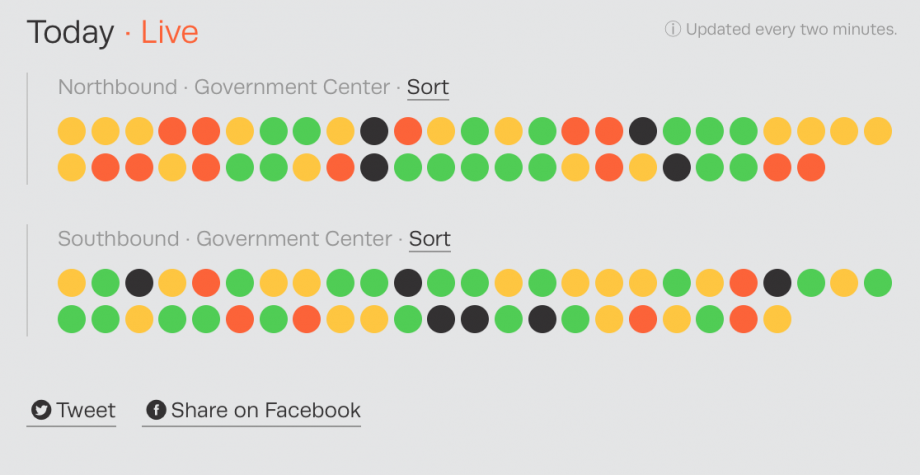 If you’re planning to catch a northbound train from Miami’s Government Center today, chances are good — higher than 50 percent, in fact — that your train will arrive late. If you’re lucky, it will only come between two and five minutes after its scheduled time. If you’re not, it will come more than 10 minutes late, or ghost you, meaning that it won’t arrive at all.

That information may be common knowledge among Metrorail riders, but a new tool — a real-time tracker of the trains from the Transit Alliance — maps it out in detail. The so-called Metrorail Audit uses data from the county to track how many trains are late throughout the day, the Miami Herald reports. The tool presents the Alliance’s findings with a series of bright dots, green for “on time,” faint and colorless for “ghost.” It’s meant to provide a visual source of accountability, according to the Transit Alliance, which advocates for more robust funding of Miami-Date transit.

“Decades of poor maintenance, budget cuts and political inaction have resulted in an unreliable and barely usable system,” the Alliance states on its website.

The Miami-Dade transit agency had not issued a public statement on the tracker as of early last week but Metrorail’s chronic lateness is nothing new.

“The age of our fleet is the cause of many quality of service challenges we are now experiencing on Metrorail,” Karla Damian, spokesperson for the Department of Transportation and Public Works, told the paper. “Our department is exploring every possible avenue to ensure that we secure the necessary resources to continue running safe and reliable Metrorail service.”

Meanwhile, funding for an expanded transit system is another point of contention in the south Florida region. In 2002, voters passed a transit tax promising nearly 90 miles of extra rail. So far, however, it’s only resulted in a two-mile extension to the Miami International Airport. A majority of the money has instead gone towards plugging budget holes in the county’s bus system. And last summer, County Mayor Carlos Gimenez signed a $534 million proposal for a number of BRT routes that would indefinitely defer the expansion promised in 2002.