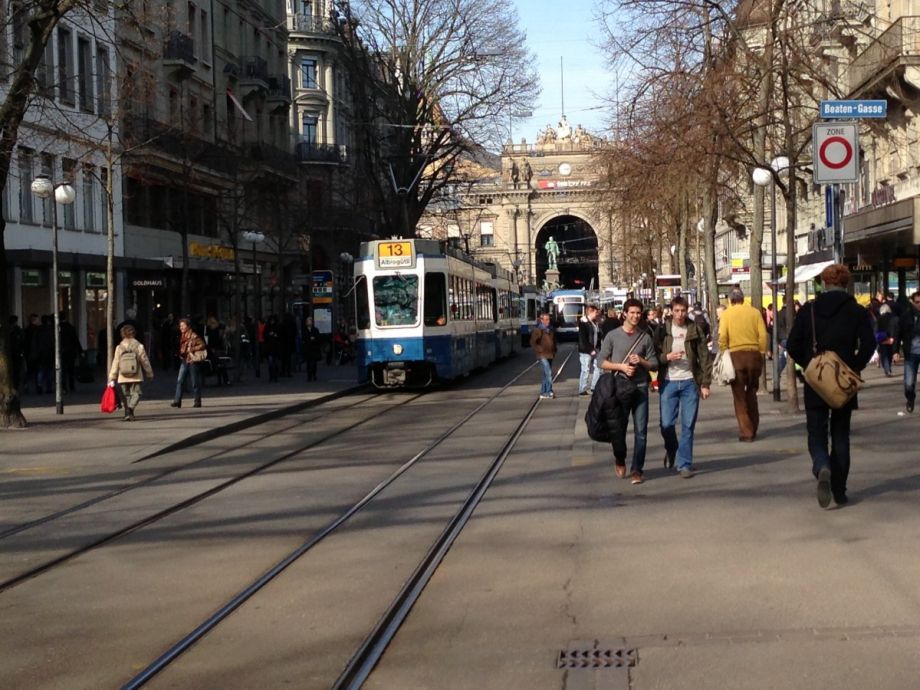 Zurich, the largest city in Switzerland, has an impressive mass transit system, with a dense network of trains and buses. The main travel mode of choice for Zürchers, however, is not public transportation, cars or even bikes, but their own two feet. According to a microcensus done in 2010, 46 percent of trips within the city happen on foot, with transit having the second-largest share (31 percent) followed by cars (17 percent) and then bikes (6 percent). In fact, while cars have lost seven percentage points of mode share since 1994, public transit picked up only one of those points, with cycling gaining two and walking gaining four. The city is trying to drive those pedestrian numbers up even further with street improvements like new at-grade pedestrian crossings of tramways (instead of the old underground passageways), as well as more street trees and public squares.

The California High-Speed Rail Authority’s Bay Area boss has dropped a hint about preliminary talks with airlines to operate the line. The authority has long said it would seek out private entities to help fund and operate the high-speed railway from Sacramento and the Bay Area to Southern California. So far it has spurned an informal offer from French rail operator SNCF, which would have demanded a more direct route, and scared off Japan’s JR Central. Ben Tripousis, the authority’s Northern California regional director, also went a bit off-message by saying, “We will certainly go back to the voters, I would guess, for additional public dollars” to complete the line. The authority later told the Silicon Valley Business Journal that he misspoke.

A winning bid by German conglomerate Siemens to build up to 32 diesel locomotives for use across the Midwest and West Coast has been upheld against a protest from competing bidder EMD, a locomotive and engine manufacturer. EMD argued that Siemens’ locomotives couldn’t actually reach 125 miles per hour, the maximum speed specified by the multi-state buyers, for a sustained period of time. While the Illinois Department of Transportation, which is handling the procurement process, dismissed EMD’s complaints, it highlight a troubling fact about the purchase: Neither of the locomotives can get to 125 mph very quickly. EMD admitted that even its own trains would take 12 minutes and 40 seconds to attain that speed, or nearly half an hour with a heavier electrical system onboard.

The poor acceleration is in large part due to American railroads’ general lack of electrification outside the Northeast. But the Federal Railroad Administration’s crash safety rules, which require very bulky trains, make the situation even worse, forbidding the use of better-performing lightweight European designs. The FRA will likely alter its safety standards within two years to allow agencies to use the more modern European train designs on the national rail network, but the bad timing of the multi-state diesel loco purchase will, like Amtrak’s electric locomotive order for the Northeast Regional service, lock in the obsolete technology for decades.

Amtrak is looking for a broker to sell 1.5 million square feet of air rights from atop the old Farley Post Office Building in Midtown Manhattan, with the hundreds of millions in sales — air rights in the priciest parts of the city go for hundreds of dollars each, though this area is much less ritzy — funding the railroad’s plans to build a new headhouse in the 1912 building, across Eighth Avenue from Penn Station.

While beloved by real estate folks, politicians and some planners, the plan for a new Amtrak headhouse — a pet project of the late Sen. Daniel Patrick Moynihan, dubbed “Moynihan Station” — has been somewhat controversial among transit types as an expensive capital project without any real capacity or mobility benefit. David Gunn cancelled the project when he was president of Amtrak, and regrets that the new leadership has put it back on the drawing board. “From a transportation point of view,” he told me last year, “it makes no sense.”

“It was controlled by a bunch of rich developers,” Gunn went on. Those behind Hudson Yards are surely eager to see a headhouse closer to their developments, and the Journal reminds us that development powerhouse Related has been trying — unsuccessfully, so far — to convince the Borough of Manhattan Community College to swap its plumb real estate in Tribeca for less pricey digs near Penn.