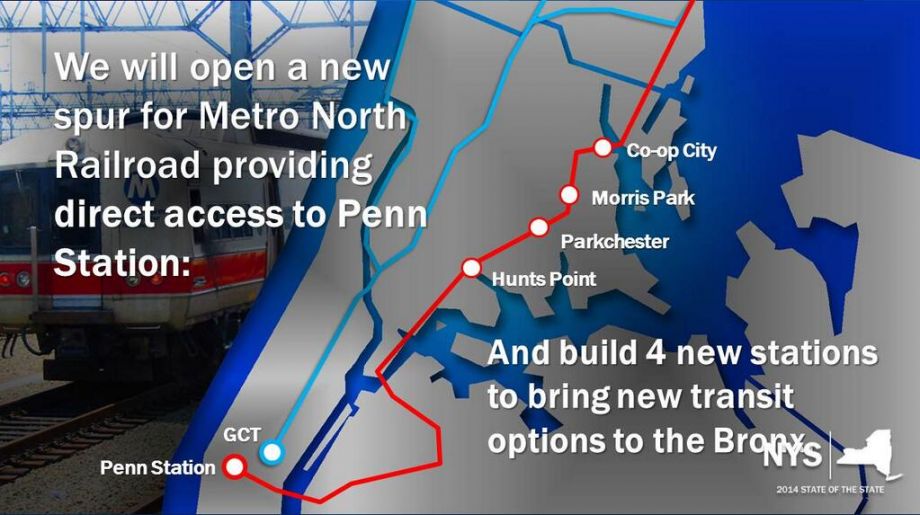 The cost, as with all New York-area transit projects, is stubbornly high. Quoth the New York Times: “The cost is expected to exceed $1 billion, according to an administration official, and Mr. Cuomo is seeking federal disaster recovery aid to pay for the bulk of the project.”

It’s an extraordinary sum of money for a project whose main selling point is that it will use existing infrastructure. The entire right-of-way currently carries many Amtrak and a few freight trains each day. While the plan may call for some extra tracks, they would be of the cheap, at-grade variety. The four infill stations will also be at-grade. Some new trains may be necessary, but it’s unclear how many. In any other first-world country, the cost would likely top out at a quarter of New York’s $1 billion-plus, and in many places much less. (Calling the plan “disaster recovery” is also questionable. While worthy and beneficial to the region, Penn Station Access, as the plan is called, has very little to do with resiliency. Mislabeling it harms the credibility of all New York-area disaster aid requests.)

Spain’s Loss Is the World’s Gain

Ever since the Spanish economic collapse, Europe’s best infrastructure builder hasn’t had much money to spend on public works projects. Spanish construction firms still find plenty of contracts to bid on across the globe, from the Panama canal to Midtown Manhattan, but with Spain mired in austerity and public works projects at a standstill, engineers are fleeing in droves. According to a Spanish think tank, a full 31 percent of those emigrating from Spain have degrees in engineering. Spanish contracting firms are no guarantee of a good infrastructure project, but hopefully some of the expatriate engineers will bring to their newfound lands the knowledge and practices that makes Spain such a public works powerhouse. And some good news for the engineers sticking it out in Spain: Foreign investors are buying. George Soros and Bill Gates together just bought a bit under 10 percent of Spanish construction giant FCC, which the Financial Times says “plays on the country’s recovery.”

The lasting legacy of any Olympic Games is the infrastructure left behind, but many have voiced doubts about how much of the massive $51 billion bill for the 2014 Winter Olympics in Sochi will actually result in tangible projects. One senior IOC member told Swiss TV that he believes that one-third of the money spent in Sochi will disappear, siphoned off by the “construction mafia” linked to the Kremlin and President Vladimir Putin. He said this not based on any specific, inside information, but rather on “what everybody says in Russia.” Of the $51 billion in total spending, only $13 billion will go toward the Games themselves, with the rest being spent on other transportation and construction projects.

Some were even harsher. A report by Russian opposition figure Boris Nemtsov alleged that between $25 billion and $30 billion was stolen, with Reuters writing in May:

Russian contractors and others who have been involved in the building boom to prepare for the Sochi Games have complained of widespread corruption, but government officials have dismissed such reports and defended the cost overruns.

Comparing Sochi’s price tag with that of previous Games, the report says that the final cost of Olympics over the last 16 years was on average about twice the amount initially planned.

By contrast, it says the Sochi Games — which Russia said in 2007 would cost about $12 billion — is more than four times pricier than planned.

Japan has perhaps the world’s most extensive railway network, but its rail industry is almost entirely home grown, with few foreign imports. But France’s push for Japan to make good on its free trade promises in the rail market has born fruit: French electronics company Thales has won a signaling contract from JR East to a install communications-based train control system for Joban Line, one of many private suburban railways radiating from Tokyo. Thales will be the first foreign company to enter the Japanese railway signaling market, and the contract award is well deserved. Japan’s rail industry excels at many things, but on signaling it has fallen behind Europe, where virtually all new metro lines (and, in Paris, some old ones) are driverless.

“Calatrava bleeds you dry,” goes the saying in Spain. That country may have the most affordable and efficient subway tunnels on earth, but it also has one of the world’s most profligate architects. The latest scandal relating to Santiago Calatrava — who has left a trail of lawsuits in his wake and has been practically laughed out of the Western hemisphere, finding work now only in developing nations — comes from his hometown opera house. The Queen Sofía Palace of the Arts, part of Calatrava’s massive City of Arts and Sciences boondoggle in Valencia, has been closed since last month due to the risk of falling mosaic tiles. On Monday, construction workers will begin removing them entirely. Calatrava and the construction companies will cover the cost of removing the mosaic, estimated at $4 million. (Sorry, New York — you’re still on the hook for Calatrava’s $4 billion subway station.)