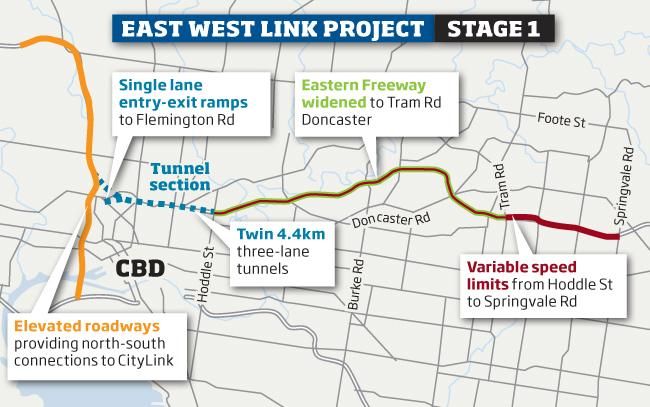 The Australian state of Victoria, home to Melbourne, has been planning a $6-$8 billion highway project known as the East West Link. The 18-kilometer toll road, which would involve significant amounts of tunneling (hence the hefty price tag), is quite controversial among environmentalists, transit advocates and, increasingly, the public at large. It just got a bit more dicey as five of six experts sitting on a panel advising the Victoria government on planning issues reportedly resigned back in August. (The government claims that the work was already done, saying, “You can’t resign from something you’re no longer on.”) Meanwhile, the project may become a liability for the Napthine government currently in power in Victoria, as a recent poll indicated that “just 23 per cent believe building the east-west link road tunnel is a bigger priority than improving public transport, which is the option favoured by 74 per cent of respondents.”

The opposition Labor party has a plan of its own, which nixes the East West Link and instead pushes a number of public transportation schemes, from eliminating at-grade rail crossings to building the similarly pricey Melbourne Metro, which would forge the city’s disparate commuter rail lines into a higher-capacity regional rail network connected by a new downtown tunnel. But have no fear, road-builders: Even Labor wants to spend $2 billion on “country and suburban roads.” The next state election is scheduled for November 29, 2014.

Hope for an Infill BART Station

From Houston and Los Angeles to Phoenix and Denver, traditionally car-oriented cities west of the Mississippi have been finding success in building out transit in their cores, attracting high ridership to new subway and light rail systems. Meanwhile, BART has largely forsaken the walkable cores of San Francisco and Oakland for sprawling extensions across the East and South Bay areas. The agency has only built two infill stations: A very successful one on San Francisco’s Embarcadero (more than 34,000 exits each weekday in 2010), and less successful station in the median of I-580 (2,373 weekday exits in its second year of operation).

A new Oakland A’s ballpark could mean a third infill station added to that list. Eyeing a 50-acre site called the Howard Terminal, backers of the stadium — who have won over Oakland Mayor Jean Quan — recognize that while the site is well served by highways, it’s more than a mile from the nearest BART stations. It is, however, right near BART tracks, and so could be added with relative ease. Since the tracks are elevated at the possible future station near Fourth Street, it would be much cheaper than the $500 million underground infill station at 30th Street in San Francisco’s Mission District.

Can Cincinnati Find $3-4 Million a Year in Streetcar Donations Before Thursday?

Will Cincinnati’s streetcar get built? Mayor John Cranley, who campaigned on a promise to kill the project (which looks like expensive symbolism on both sides to us), has until Thursday to decide whether to accept federal money and agree to operate the streetcar for 25 years, with the Federal Transit Administration denying an extension of the December 19 deadline. Operating the short streetcar line will cost $3.5-$4.5 million per year, and Cranley wants to find private operating funding before he agrees to build the project. He reasons that “others will have no incentive to contribute to the operating cost” if Cincinnati agrees to take the money before finding private backing. But the mayor isn’t losing any sleep over the possibility that he won’t find private funders by Thursday: “Frankly,” he said, “if they can’t come forward with those kinds of operating dollars, I won’t be upset.”

Surge in Unpopularity as Uber Surges

When inclement weather or a popular weekend drives up demand for Uber’s regulation-skirting car service, the company responds with “surge pricing,” where it jacks up the price of a ride. Basic economics suggest a few reasons for this: To make as much money as possible, to create a “market-clearing” price at which everyone who wants to use the service can, and to incentivize drivers to enter the market. (While Valleywag’s Nitasha Tiku doubts this last point, Matt Yglesias spoke to one Uber driver who said that “he’d decided it was late enough and time to head home, but the doubling of fares tempted him to stay out on the road.”) This premium for busy nights is fairly uncontroversial — until, that is, increased demand this weekend due to a snow storm drove prices up nearly 10 times the normal rate in New York City, causing ride prices to start at nearly $100. (The result: Headlines like “Jerry Seinfeld’s Wife Spent $415 During Uber’s Surge Pricing To Make Sure Her Kid Got To A Sleepover” over at Business Insider.)

The strategy might work, but it could also backfire in two different ways. First of all, it could fail in the marketplace. Consumers generally like predictability in prices, which is why restaurants don’t jack up the prices on weekends that turn out to be particularly busy. (Though they do change prices in more regular ways, such as setting lunch prices lower than those at dinner and offering happy hour drink specials.) But it could also earn the ire of regulators, not all of whom Uber has yet won over.