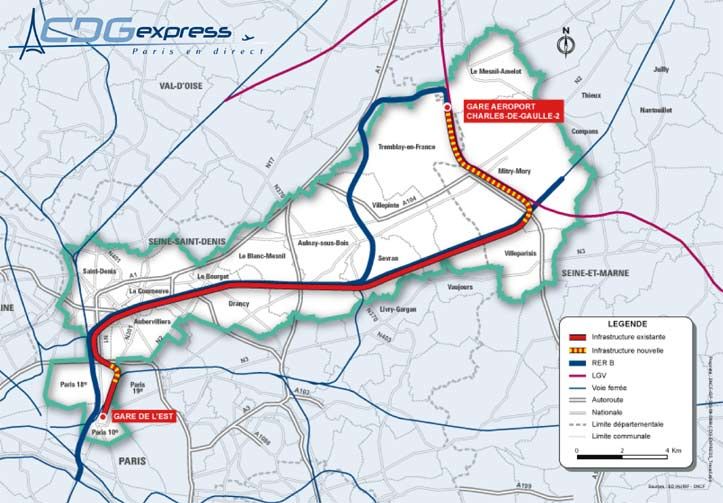 France is getting an express train to its main airport. The project to accommodate express service from Paris’ Gare de l’Est, one of the city’s six major intercity rail hubs, to the Charles de Gaulle airport was revived last week, according to the country’s minister of transport. Currently, the airport is accessible via the RER B suburban train, which takes 35 to 40 minutes from Châtelet-Les Halles. The Charles de Gaulle express project would involve building eight kilometers of new track on either end of the route while utilizing 32 kilometers of existing RER B track in the middle.

The project would cost around €1.8 billion, or $2.5 billion, based on a public-private partnership model between national infrastructure owner Réseau Ferré de France and the Aéroports de Paris authority. Construction and operational costs will be paid back through the expected €24 tickets — the RER fare to the airport is currently €9.75 — and perhaps a special levy on tickets for flights landing at the airport in Roissy. The goal is for the line to be self-sustaining, with the prime minister of France assuring elected officials that the money will not come at the expense of “everyday transit.”

First initiated in 2000, the project was originally planned open in 2006. The current iteration, however, is not expected to be completed until 2022 or 2023, with work not starting until 2017. In the meantime, Air France and national rail operator SNCF are working together to improve the existing RER B service.

The economic crisis in southern Europe has struck a crippling blow to public works budgets in Spain, which had been Europe’s most formidable infrastructure builder. Projects have been canceled, and one short line on its impressive high-speed rail network had to be shut down entirely, even though its capital costs had already been paid.

Despite it all, Spain is forging ahead with plans to fill out its high-speed rail network. To save costs, though, some lines will have only a single track along much of their length. The 95-kilometer route from Olmedo to Zamora, for example, on the high-speed line from Madrid to Galicia in the northwest, will be single-tracked for 70 kilometers, with room left to build the second track later. At 350 kilometers per hour, it looks like it will be the world’s fastest single-track high-speed railway.

Key transit routes through the heart of Manchester are getting a makeover. Work began last month on the streets around Oxford Road, which are getting better bus stops and cycling paths. The real prize, though, will be Oxford Road itself, which Transport for Greater Manchester calls one of the busiest bus corridors in Europe. Much of the road will be completely blocked off to general traffic, given over instead to buses and taxis, which will have lanes in the center, and bicyclists, who will have their own on the sides. These lanes will weave around bus stops such that they never have to cross each others’ paths.

The changes are part Transport for Greater Manchester’s larger bus priority plan, which by 2015 will improve bus and bicycle travel along three main corridors radiating out of the city center. Miles of new bus lanes will appear, created in some places by repurposing existing road space and in more suburban areas with newly constructed lanes.