New Starts: Cheap Trains in Switzerland, Expensive Ones in New York – Next City 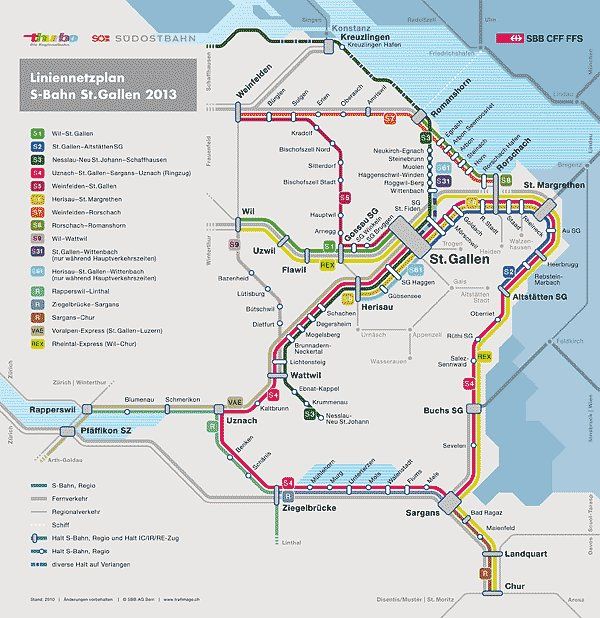 The Swiss canton of St. Gallen only has about half a million residents, but it has better regional rail than the largest cities in the U.S. The region’s S-Bahn — that’s German for a regional rail network whose suburban lines merge to form high-frequency downtown trunk lines — increased service on its dozen or so lines that snake through the 782-square-mile canton. (Southern California’s Metrolink, by comparison, has only seven lines.) Every station now has half-hourly service, with 15-minute frequencies in and around the city proper. Compare this to New York, where the Long Island Rail Road offers only hourly midday trains to Penn Station from Forest Hills, a neighborhood that itself has more residents than St. Gallen.

In the U.S., we often blame poor planning on a lack of bureaucratic unification. But like many European regional networks, the St. Gallen S-Bahn involves a dizzying array of transit agencies — Swiss Federal Railways plus four other cantonal railways — working together to provide a seamless front to riders. Just beyond the system’s range, there are plans to build a small S-Bahn between Switzerland and Austria via Liechtenstein, upgrading the single-track Feldkirch–Buchs Railway and giving it half-hourly service by 2017, with an eye toward one day connecting it to the St. Gallen S-Bahn.

Enhancements to enable the St. Gallen S-Bahn’s 15-minute frequencies cost only $300 million. Planning started in 2005, and service started on December 15.

Meanwhile, in the rail capital of the U.S., New York City Mayor Michael Bloomberg ceremonially opened the 7 train extension to Hudson Yards (it won’t open for service until June). The project is nose-bleedingly expensive: At around $1.3 billion per kilometer despite a relative lack of stations, it’s at least three times as expensive as lines abroad that tunneled through more harrowing terrain. Yet the mayor successfully dodged a question about the cost at Friday’s opening ceremony. He did say that “this was not that difficult, in all fairness.”

It came down to the wire, but Cincinnati’s streetcar — mired in political drama after newly elected mayor John Cranley tried to kill it — has survived a 6-3 city council vote to move forward. A private organization “offered to pay $900,000 a year for 10 years” to fund operations, whose annual expenses will total between $1.88 million and $2.44 million, according to a consultant’s report.

Illinois, California, Michigan, Washington and Missouri have chosen Siemens as the company that will build about 35 new diesel locomotives. The locos will have a maximum speed of 125 miles per hour, though no lines in those states can handle trains that fast. (At least, not yet.) The Siemens bid came in at around $226 million for the trains — $35 million less than its two competitors, EMD and MotivePower, who both offered around $260 million.

The tech buses that shuttle workers from trendier ‘hoods in San Francisco and Oakland to low-rise suburban office campuses in Silicon Valley have emerged as a flashpoint for the Bay Area’s high housing prices and gentrification woes. Protesters last week again held up a bus leaving for Silicon Valley, this time in Oakland. But are the buses really the cause of high housing costs, or just a potent symbol? No matter how often urbanists try to redirect anger toward the region’s pitiful urban housing production numbers or sub-par transit networks, the buses seemingly remain the anti-gentrification movement’s focal point.