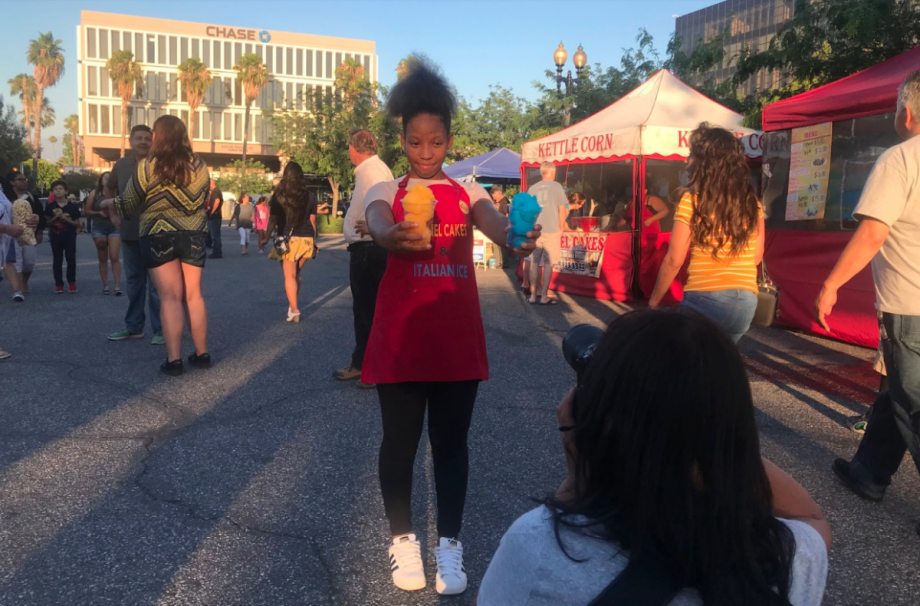 A young woman poses for a photo at SB Food Fest. (Photo by Alejandra Molina)

Luis Ojeda isn’t the type of person to complain and wait for help. He’s about doing.

So when he felt the city of San Bernardino, California, was taking too long to clean up an illegal dumping site outside his home, he decided to do it himself. Ojeda, who owns a small demolition company, used his own equipment to clear the debris. Then he drove around and removed other piles of garbage in the city. Soon, he was leading Sunday cleanups with about 20 to 60 people that now make up the volunteer service group We Are The Change.

Ojeda became known as the go-to guy around town. People in the city would go to him for guidance on issues like sidewalk vending. Although street vendors knew vending had recently become legal in California, they were still unaware how the law applied to them. The state law bans criminal penalties for sidewalk vending and encourages cities to establish permit programs for vendors. The way street vending activists see it, the new law can work as a shield from bad permit policies.

Ojeda read up on the new law and he thought of an idea. What if he organized street vendors to set up shop on a downtown sidewalk in San Bernardino during the weekends? He thought the event could not only bring some life to the area, but also highlight the need for the city to ease those vendor restrictions.

He did and it worked. Hundreds showed for what the local paper described as “grassroots taco nights.” About 20 vendors, mostly taqueros, participated in the weekend-long taco nights. Vendors, however, didn’t have permits, so the rogue events pressured the city to overhaul its sidewalk vending permitting program to stimulate and streamline registration. Now, SB Food Fest — dubbed the Inland Empire’s first weekly food festival — is possible. The first event was Saturday, July 13 at a parking lot near City Hall.

For Ojeda, the street food gatherings are a “great opportunity for the city to have revenue and for the residents to become entrepreneurs.” It’s an example of how residents are helping revitalize a city that recently emerged out of bankruptcy and that often gets a bad rap. At the event, Ojeda had volunteers join him on stage to recognize them for their service. “What I’m going to ask you guys, [is] to ask yourselves what can you do for our city? Don’t wait for the government … Let them follow us!” Ojeda chuckled as he addressed the audience from the stage.

The way Ojeda sees it, the perception of the city has been so negative that longtime residents are “ashamed they’re from San Bernardino.”

“When you lose pride in your community, you lose everything,” Ojeda says. “I want to bring the pride back.”

Localism, as noted in this USC Annenberg report, is the argument that “communities must take it upon themselves to solve problems, focusing on their unique local assets to collaborate and reach consensus on what needs to be done.”

The USC report documented a recent convening that included local government officials, newspaper publishers, librarians and nonprofit and business representatives. Alex Beltran, with San Bernardino Generation Now, was in attendance. The gathering was an effort to talk initiatives that have worked in cities like Compton, Fresno and San Bernardino.

Beltran spoke of the artists that Generation Now organized to paint murals at a local park that many residents avoided. The group also also helped clean an abandoned water department building that, with the help of local leaders, they turned into a community center that has hosted affordable theater shows.

Many solely associate San Bernardino — a city that is more than 60 percent Latino and about 15 percent African American — with crime and gangs. It’s a working-class community that between 2013 and 2017 had a median household income of $41,027, according to the U.S. Census. About 30 percent of its residents live below the poverty line, the Census reported.

“You kick a rock in San Bernardino and it’s noticeable because there’s not a lot going on in San Bernardino,” she says. “You can do something really small that is really positive for the city and it’s going to be noticed.”

At the inaugural event, about 20 vendors — from taqueros and BBQ chefs to snow cone and vintage clothing sellers — participated in the food festival. Musicians and a comedian performed during the event. San Bernardino Mayor John Valdivia and Democratic Assemblywoman Eloise Reyes were in attendance.

Valdivia, at the event, said he was excited about the food fest’s potential. The city, he says, “needs a downtown centerpiece and this provides a compliment to kind of a renaissance for our community.”

He also acknowledged Ojeda’s criticism of the city, adding that the city and We Are The Change worked together to make the festival possible.

“We’ve got to have process and there’s rules and laws to abide by, but on the other side of things, we need to partner with good collaborators,” Valdivia says. “ … We’re grateful for their partnership.”

For Margaret Hill, who has lived in San Bernardino for five decades, the food fest is a “great first start in revitalizing downtown.” She was at the kickoff event.

“Everything doesn’t have to be done big,” says Hill, a board member of the San Bernardino City Unified School District. “Sometimes when you plant a little seed, you’re going to get a big ‘ol tree. I think this is what this is all about.”

Ojeda in the meantime says he will continue to pay out of pocket for event logistics, like hiring security guards. He hopes the festival can become self-sustainable. He also said he wants to plan educational sessions for street vendors to learn about meeting health standards to apply for permits.

He’s also chipping at another goal.

“What I want to achieve by this is to get people to be involved in the policy process … To demand that they be taken care of by the local government,” Ojeda says. “The government works for us, not the other way around.”