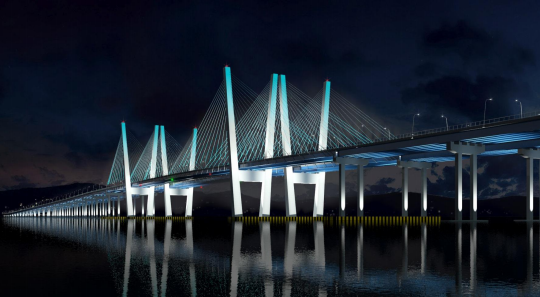 Despite its questionable utility, the Tappan Zee Bridge replacement is likely to be approved for TIFIA funding. Credit: The State of New York

In his State of the Union address on Tuesday, President Obama argued that federal transportation funding in the U.S. should follow a “fix-it-first” philosophy, where the rebuilding of roads and bridges (and presumably transit lines) with structural deficiencies is prioritized over the construction of new infrastructure. There is a lot to like about this idea: It would maximize the use of existing resources, and it would ensure that the government isn’t sponsoring an expanded mobility infrastructure before existing structures are up to date.

Yet the projects the administration will begin financing through the TIFIA reduced-interest loan program are likely to take the opposite tact, for the most part supporting new construction over maintenance of the old. Of 28 projects that have submitted preliminary applications through the middle of last month for financing over the next two years, all but four are new construction or expansion of existing road, transit or airport facilities. Moreover, road projects are likely to account for a large majority of infrastructure funded. Of the applications that have been received by the DOT, more than 70 percent are highway projects.

TIFIA provides three types of federal aid: Secured loans, lines of credit and loan guarantees, all of which are to be paid back over a long period by project sponsors, generally through user fees (especially for highways) or local sales taxes (especially for transit). In the past, the DOT has funded 27 projects through TIFIA, accounting for $9.2 billion in federally leveraged assistance and $36 billion in total spending by all authorities, including local and state financing.

The new 28 projects that have been submitted for aid over the next two years are from locations across the country and account for a wide variety of transportation: Chicago’s Riverwalk pedestrian way, Seattle’s East Link light rail line and Houston’s Grand Parkway superhighway are a few notable examples. That said, most of the projects would produce new or expanded roads, and all — with the exception of a $1 million request from Southeastern tours — are sponsored by city, state or regional governments or authorities.

We’ve known about this problem for months. MAP-21, the two-year transportation bill passed in June, provided for a major expansion of the TIFIA program (now sometimes known as “America Fast Forward”), offering $750 million in aid in fiscal year 2013 and $1 billion in 2014. Local or state (or private) project sponsors will be expected to cover a minimum of 51 percent of costs through other sources, but TIFIA can be used to leverage up to 49 percent of aid. In essence, the government expects to be able to use that $1.75 billion to produce a federal lending capacity of $17 billion and leverage a total of about $50 billion in funding for various projects around the country. So far, letters of interest and applications for $41.3 billion worth of projects — all from legitimate entities — have been submitted. The table below provides an overview of some of these proposed projects. 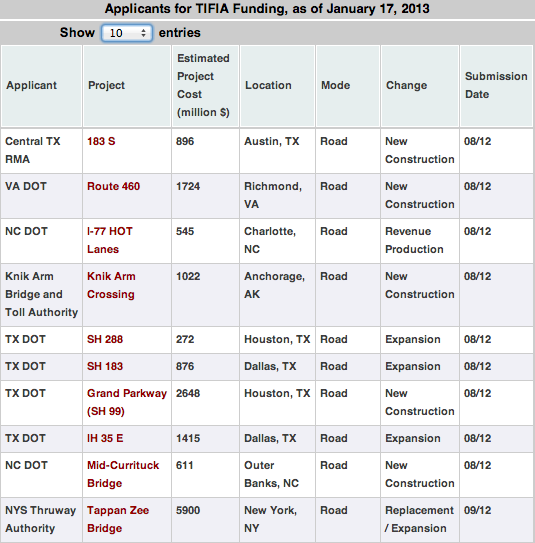 Though the pre-MAP-21 TIFIA legislation provided specific guidelines that encouraged the selection of “innovative” transportation, MAP-21 effectively eliminated that criterion. Rather, in choosing the projects for financing, Congress mandated that the DOT is only supposed to consider whether the proposed project is eligible, whether its proponent is creditworthy, whether it would involve a public-private partnership and whether construction contracting could begin within 90 days of application approval. All of the projects in the above list likely meet those criteria.

The result is that TIFIA has, in some ways, become a first-come, first-serve program that is, according to analyst Phineas Baxandall, structurally skewed against public transit. The result is that projects like New York State’s proposed Tappan Zee Bridge peplacement — pictured at top — is likely to be approved for financing, despite its questionable utility. (This is particularly true because the White House selected the project in 2011 as a “priority” infrastructure project.)

The other projects on the list, including most of the new highway projects, are likely to be approved by the DOT as well. There remains about $9 billion worth of projects that could be aided through TIFIA, but transit authorities do not appear to be rushing to get their projects on this list — and there is little that Washington can do to encourage them to. This should put in serious question the ability of the government to orient infrastructure funding towards renovation rather than new construction.

It would be incorrect to suggest that the previous guidelines made TIFIA a progressive transportation funder. Of projects that received commitments in the past, accounting for about $10.5 billion in aid, 77 percent of funds went to roads, most of which were new construction or expansion. One explanation for this preference is that TIFIA explicitly requires the financing of projects that have dedicated revenues associated with them; road projects with tolls on them offer this far more easily than transit projects that will almost definitely operate in the red throughout their useful lives and which require harder-to-get sales taxes to make the financing work.

The problematic skew of the TIFIA funding, however, is not the end of the story on transportation funding in the U.S. Obama’s speech and related White House-released information suggests that the administration wants the Congress to pass a new long-term transportation bill this year that, like previous proposals, would significantly expand transportation funding through freed-up money available thanks to the end of the Afghanistan War. This would include a $50-billion up-front allocation to infrastructure, of which 80 percent would go to renovations of existing facilities. Past Obama administration transportation budgets have proposed shifting funding significantly toward transit and rail, increasing their share from 22.9 percent currently to 35.7 percent over the course of five years.

Congress, and in particular its Republican members, have been reluctant, however, to move forward with such new transportation budgets, in part because the “freed-up” money from the wars ending is an imaginary concept in an age of significant budget deficits. The result has been a series of bills that present little to no progress on changing the dynamics of transportation funding in this county, and MAP-21 was no exception. Yet 2013 is a new year, and when it comes to approaching the question of how best to invest in the nation’s infrastructure, you never know what compromises might be reached this time.