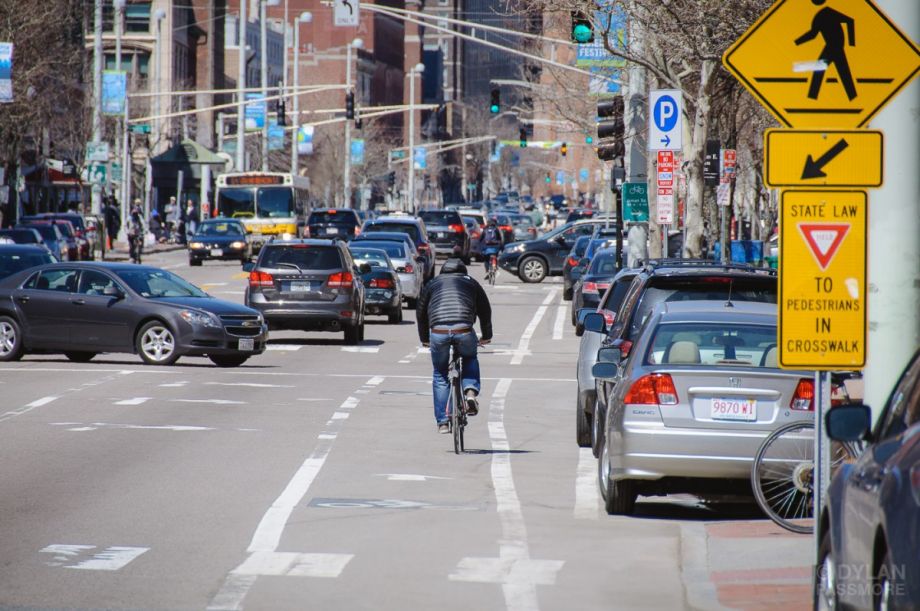 Welcome to “The Mobile City,” our weekly roundup of newsworthy transportation developments.

Ever since the dawn of the Good Roads Movement, highway engineers have designed both rural roads and urban thoroughfares with one goal uppermost: moving as many cars as possible as quickly as possible.

This is a fine goal if what you want to build is a freeway, and those should be designed exclusively for the safety and comfort of the motorist. But what works for a controlled-access highway actually makes things more dangerous for users of a city street or boulevard. Many of the crashes people blame on inattentive pedestrians or bike riders could be avoided by designing the road so cars don’t go down it so fast, or designing it so that pedestrians and bicyclists get equal treatment with automobiles.

Two states are taking steps to implement this different approach to designing and managing roads. In Massachusetts, new rules require state highway engineers to incorporate facilities for pedestrians, wheelchair users, and mass transit patrons as basic components of highway construction projects, and Virginia legislators are considering a bill that would let the state’s cities and counties set speed limits as low as 15 miles per hour in commercial and residential districts.

The reason your local state highway looks like it does is because it’s designed in accordance with a set of “controlling criteria” — specifications that set minimum standards for things like lane widths, curvature, changes in grade, and the like. In effect at the federal level since 1985, these criteria produce roads that are safe — for motorists traveling rapidly down them. (To be fair, some of the criteria apply only to high-speed highways.)

What these rules don’t take into account, however, are the needs and safety of the non-motorized traffic on them — that is, people riding bikes, on scooters, in wheelchairs or on foot. Streetsblog Mass reports that for a year now, that’s not been the case in Massachusetts. New rules adopted in January 2020 by the Massachusetts Department of Transportation (MassDOT) require state road reconstruction projects to include high-quality bikeways and ADA-accessible pedestrian facilities. In addition, projects affecting transit routes must also include bus shelters, crosswalks and transit-priority infrastructure.

The new criteria further the goals of the state’s “Healthy Transportation Policy,” adopted in 2013. That policy has as an explicit goal reorienting MassDOT road projects to “seek to increase and encourage more pedestrian, bicycle and transit trips.”

“I feel strongly that we’re leading the pack here,” MassDOT Chief Engineer Patricia Leavenworth told Streetsblog in a recent teleconference to discuss the new policies. “I recall going to an AASHTO meeting a couple years ago, and several other DOTs told me that they thought Massachusetts is really a leader in this area.”

“Twenty is plenty” has become the rallying cry of urban pedestrian advocates who argue for lower speed limits as key to reducing the incidence and severity of crashes involving autos and pedestrians. But in Virginia, state law prevents cities and counties from imposing speed limits below 25 mph.

That will change soon, according to a story in the Virginia Mercury. A bill approved by both houses of the General Assembly in this year’s legislative session will allow Virginia cities and counties, which are legally separate entities, to set speed limits as low as 15 mph in business and residential districts if they so choose.

The impetus for the legislation was a rise in pedestrian injuries and fatalities in the wake of the COVID-19 pandemic. Reduced traffic on the state’s roads has led drivers to go faster, and that in turn has caused the fatality count on Virginia’s roads to climb.

Delegate Betsy Carr, a Richmond Democrat, introduced the bill at the behest of the family of Aajah Rosemond, a Richmond teenager who lost her life when a car whose driver was both blinded by sunlight and driving too fast struck her while she was crossing a street to visit a neighborhood store last fall. In explaining the need for the legislation, Carr noted the rise in pedestrian deaths: “In 2019, we hit a new record number of pedestrian deaths and, despite the reduction in driving during the pandemic, speeding fatalities increased,” she said. “We had 123 pedestrian fatalities in 2020. One in six people killed on Virginia’s roads is on foot now.”

Bradley Tindall, director of outreach for Richmond bicyclist-pedestrian advocacy group Bike Walk RVA, laid the blame for the rising death toll squarely on drivers going faster. He told the Mercury that “we saw a 12.5 percent jump in speeding-related fatalities last year but fewer crashes, which means crashes have gotten more deadly, especially for people on foot.”

Planning consultant Angie Schmittt, author of “Right of Way: Race, Class and the Silent Epidemic of Pedestrian Deaths in America,” told the Mercury that just lowering the numbers on the speed-limit signs will make a difference in the death toll: “Research shows lower speed limits reduce average speeds. Lowering the speed people are struck by even just 5 mph can make a huge difference, especially if the victim is older. Given the U.S. population is getting older, this is an increasingly important change states and localities can make to improve safety.”

In addition to the advocacy groups, both the Virginia League of Cities and the Virginia Association of Counties backed the legislation, which passed the House of Delegates by a 93-6 vote but only barely survived in the more conservative state Senate. It now goes to Gov. Ralph Northam’s desk for his signature, which is expected. According to the story, the jurisdictions most likely to drop their speed limits as soon as the bill becomes law are the cities of Alexandria, Norfolk and Richmond, the state’s seventh-, second- and fifth-most-populous cities, and Floyd County, a rural Southwest Virginia county located between Roanoke and Blacksburg known for a strong music scene, countercultural vibe and tradition of Republican Party support dating back to Radical Reconstruction (most of its soldiers deserted the Confederate army during the Civil War).

How Riders Got LA Metro to Restore Bus Service

TransitCenter this month tells the story of yet another rider-initiated reconsideration: After riders mobilized by a coalition of local advocacy groups flooded members with comments and pleas, the Los Angeles County Metropolitan Transportation Authority (LA Metro) board voted unanimously in January to restore bus service that had been cut after the COVID-19 lockdown took effect. When that happened in March, LA Metro reduced service to 80 percent of its 2019 level. But, the article says, in contrast to many other transit agencies that implemented service cuts that would last until the pandemic subsided, LA Metro said that the cuts would remain indefinitely and that eight percent of them would remain in place even after the others were rescinded.

This, many riders told the LA Metro board, would simply not do. One reason why: Ridership didn’t fall as much in LA as it had in other cities. The cuts led to overcrowded buses blowing past waiting riders, late and unreliable bus service, and longer bus commutes.

Building on the organizing they had done around a 2018 proposal to revamp the city’s bus service, the advocacy groups got riders to send complaints to the Metro board in time for its fall meeting. But because no new source of money beyond the first round of coronavirus relief had yet been identified, the LA Metro board declined to restore service. Two developments since reopened the window for restoration: two more COVID relief bills with more money for transit in them, and sales tax revenues in 2020 that ran an unexpected 300 percent above projections.

These developments opened the door for a successful second round of petitioning. One advocacy group, the Alliance for Community Transit-LA (ACT-LA), arranged for a meeting with Los Angeles Mayor and LA Metro board member Eric Garcetti at which individual riders spoke with him directly. In all, advocacy groups delivered 150 comments from riders to board members, and another 100 low-income riders called members directly to voice their concerns. KNX Newsradio quoted one of those riders who spoke up in its January report on the board vote: “I’m a quadriplegic and rely on health care workers to do everything for me from brushing my teeth to getting dressed in the morning. My care providers rely on Metro to get to my home because they don’t have any other transportation. They have reported to me that, at times, buses are overcrowded and they have been late to work because they do not want to afford a crowded bus which puts all of our lives in danger,” one woman said.

Garcetti and his colleagues clearly got the message. The mayor told KNX, “A lot of people wrote to all of us, we agree with, heard loud and clear and have now incorporated to make sure that the restoration of bus service comes first.”

The board’s vote to restore service was unanimous. Originally set to take effect at the beginning of fiscal year 2022, the start date was delayed to December 2021 but then moved back up to September after riders complained again.

This campaign marks yet another victory for an effective coalition of advocates for low-income, disabled and other bus riders, who make up the majority of LA Metro patrons. One of those groups, the Bus Riders Union, was part of a coalition that successfully challenged LA Metro’s rail transit construction program in 1994 on civil-rights grounds, winning a consent decree that required the agency to reduce bus fares and buy more buses to increase service frequency and reduce overcrowding. During the ten years the decree was in effect, ridership soared on LA’s bus routes.