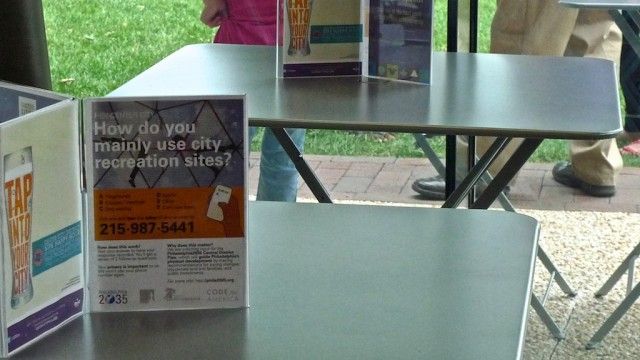 A sample question for the pedestrians of Philadelphia. Credit: Code for America

It’s a common refrain: I’d like to get more involved with the planning process in my neighborhood, but don’t have the time to attend all those community meetings. There’s no telling how many people in cities across the country have let their views go unheard due to a poorly scheduled town hall or zoning hearing.

For those who see smart tech as the answer to fostering civic engagement, promising news came out of Philadelphia on Friday. As part of its second third visit to Philly this year, San Francisco-based non-profit Code for America launched a pilot project that allows residents to sound off on issues pertaining to their communities using nothing more than a cell phone.

Dubbed Textizen, the free platform involves a charming mixture of new and old media. It works by having residents respond via text message to questions posted in various places around the city, from bus shelters to telephone posts, asking for their opinions on specific community topics like transportation and quality of life.

For instance, people walking down the street may happen upon a poster asking if they’d consider taking rapid transit to reach Center City, Philly’s primary downtown. Along with the query, the passersby would see a phone number where they could send feedback in the form of a text. After the initial reply, the system would send one or two follow-up questions to better gauge the person’s feelings. Human staffers at the Philadelphia City Planning Commission will then process each response and incorporate feedback into larger public planning efforts.

The questions, which started appearing on both physical posters and social media channels on Friday, come from the Philadelphia Planning Commission as it continues to shape the city’s comprehensive plan for the next two decades. So far, posters have have stayed confined to Center City and a few northeastern neighborhoods, since portions of the plan affecting these districts are to be published in July.

“It’s probably most useful if there’s a decision hanging in the air,” said Code for America fellow Michelle Lee.

Textizen not only allows local leaders to get a sense of what people want to talk about, but also find out in what direction people would like to see the conversation go for policy issues already on the table. As of now, the pilot includes questions in both multiple-choice and open-ended formats, with the latter yielding the richest responses so far, according to Lee.

For a step-by-step breakdown of how the process works, check the video below.


Textizen – Citizen feedback for the digital age. From Code for America on Vimeo.