New Online Tool Will Help You Find a “Good” Bank 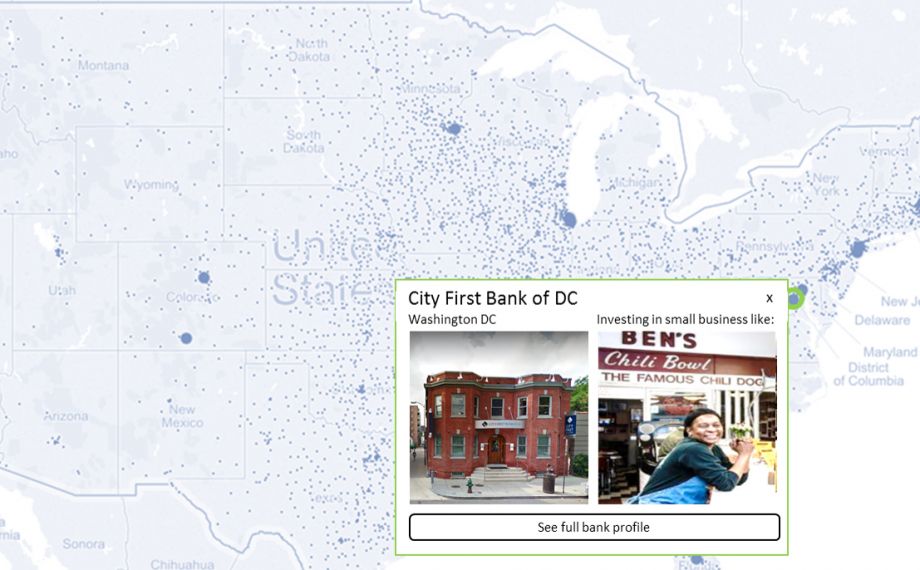 An early beta version of the Mighty platform (Credit: Mighty)

Gloria Nauden’s parents are entrepreneurs, and she still remembers how a bank helped them grow their small business.

“A bank helped my parents go from being poor to making it,” she says.

But for the past three years, as vice president for marketing and communications at City First Bank of DC, Nauden has been grappling with the perception that banks are only out to make a profit. Between the financial crisis and more recent Wells Fargo fake accounts scandal, it’s no easy task.

Unlike most banks, City First Bank’s largest shareholder is a nonprofit organization, City First Enterprises, whose mission is to provide access to capital in Washington, D.C.’s low- to moderate-income neighborhoods, which have experienced decades of discrimination from mainstream banks. But like many nonprofits, marketing has historically taken a backseat to achieving the nonprofit’s mission.

Enter Mighty, a new platform that will help “small but powerful” banks connect with potential depositors or investors who might be swayed to pick a bank based on positive social impact.

“What we want to start doing on day one is putting amazing banks that merit national attention on the map,” says Megan Hryndza, co-founder and CEO. “It’s time to hear what’s going awesome in banking, what’s going well, what banks have consumers and stakeholders and partners that show up and say this is a special bank.”

Mighty is currently taking signups for its beta, issuing invites to individuals on an incremental basis, and will be extending more invitations for engagement with the platform in the future. City First Bank is one of two (the other being Southern Bancorp) that just signed on to test the platform from the institutional side.

In some ways, Mighty is like a cross between Yelp and Kiva. Yelp, in the sense that one of its ultimate goals is to refer users to banks that can meet their checking, savings, and other needs as depositors or investors; Kiva, in the sense that the key differentiator among banks, other than geography, will be impact on places and people.

“Most of us aren’t food scientists, but we can go into a store and compare 12 kinds of potato chips and have the power to make a choice,” says Nisha Sutaria, Mighty co-founder and analytics lead. “We talk about how do we create something like a nutrition label for banking data. We want to have more transparent choices between banks.”

Making sense of banking data is a massive undertaking. There is probably more publicly available data about the U.S. banking sector than any other sector in any country around the world, Hryndza says.

On the FDIC website, you can look up how much in deposits are held at any given FDIC-insured bank branch in the country. The Federal Reserve Board and the Office of the Comptroller of the Currency make Community Reinvestment Act Examinations available for download, revealing every bank’s activities in low- and moderate-income neighborhoods. The Home Mortgage Disclosure Act requires banks to report home mortgage lending activity including location, and you can browse or download that from the Consumer Financial Protection Bureau.

“We saw there was all this data out there and we were only scratching the surface of what’s available to report. For an everyday person who isn’t a regulator, or banker, an investor, there’s nowhere they can go for this data in digestible form,” says Sutaria.

The foundation for Mighty’s platform is what’s known as the Consolidated Reports of Condition and Income, or call reports for short, made available by the Federal Financial Institutions Examination Council. These are quarterly reports of each bank’s activity and finances, including balance sheets — which include dollar values of loans made for various purposes (real estate, commercial, individual, etc.) as well as deposits held and other sources of capital.

“A call report is 80 pages long, we’re working on how do we distill that to five or six indicators that can help bring transparency and choice to consumers,” Sutaria explains.

Mighty starts by cross-referencing call report data with census data, “to understand who’s doing what, where and for whom,” says Sutaria. Then they layer on industry certifications like CDFIs (community development financial institutions), Minority Depository Institutions as identified by FDIC, the Global Alliance for Banking on Values with about 40 members worldwide, or Certified B Corporation banks.

“There’s so much data. We’re thinking about how to responsibly present it, and getting people the muscle memory to navigate it for the first time,” says Hryndza, who left behind a decade of experience in marketing for large multinational corporations. Hryndza saw how listening and engaging with online audiences shaped successful marketing strategies for her former employers. She hopes Mighty can do the same for smaller, resource-starved, mission-driven banks.

Nauden can’t wait to learn more about the kinds of people attracted to a bank like hers, and how to market to them more effectively on a budget.

“Who’s on the community development radar? Who cares about community? Who cares about the development of communities and the connection to finance? We want to know who are these people … we want to know the psychographic of a person that has that habit or behavior,” she says. “Long term, we hope it becomes normal that there’s a certain type of bank with a certain type of system, the way a Whole Foods or Trader Joe’s is different from Safeway or 7-Eleven.”