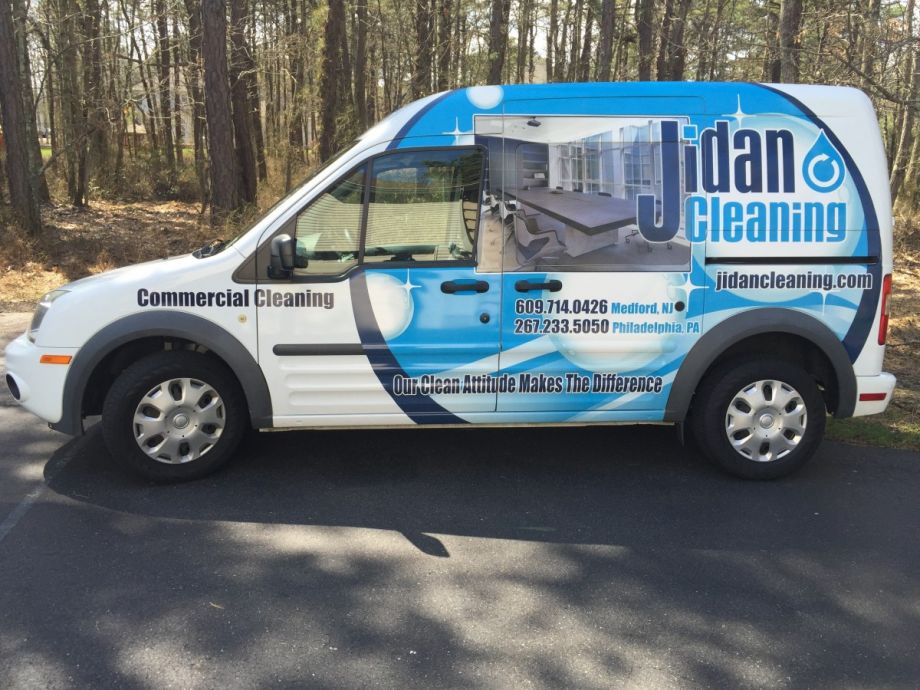 “I always tell people I started this business for my family,” says Patricia Claybrook, president and CEO of Jidan Cleaning. “Over the last few years I’ve seen what a difference being gainfully employed has meant for the folks that work for me.”

Those folks include at least seven ex-offenders so far, mostly men. “No one else would give them a chance. They’ve become some of my best employees,” says Claybrook, who emigrated from Trinidad to the U.S. when she was 6. She founded the company as a side project in 2005, and has been running it full-time since 2010. Some of her first clients were physicians’ offices she was connected to through her previous life as a pharmaceutical rep. Now Jidan Cleaning employs around 40 people, mostly part-time and all paid above minimum wage, and made $1.5 million in revenue last year.

One ex-offender has been with the company for going on two years now. “Somebody who no one would hire, who has three children, couldn’t get a job or was working under the table making 4 dollars an hour, we gave him an opportunity,” Claybrook says. “For him to be able to buy Christmas presents for his children or buying himself a cell phone? The positive effect trickles down.”

Two ex-offenders have moved on to better opportunities. “You know the old saying, ‘it’s always easier to find a job when you have a job,’” Claybrook says. “For quite a few, we’ve been a stepping-stone for people to move on and make more money or something where they had more hours. My number one goal is to get those bigger contracts so I can put more people to work.”

Jidan Cleaning just got a huge boost toward that goal, receiving the first-ever equity investment from The Enterprise Center, a community development financial institution (CDFI) and small business development organization based in West Philadelphia. It is Jidan Cleaning’s largest infusion of capital yet. “I never tried to use ‘other peoples’ money’ until a few years ago. Everything up until then was my own money,” Claybrook says.

“The Enterprise Center has been looking to get into equity investments for some time,” says Chris Chaplin, director of private and public capital at The Enterprise Center. “A lot of minority- and also women-owned companies are not at the size they can get true VC money, so there’s a gap in terms of supporting a number of these companies.”

Founded in 1988, The Enterprise Center has already grown into a local leader on the small business lending front. Their Capital Corporation (TEC-CC), which houses their small business lending, launched in 2002. Focusing on minority- and women-owned businesses, TEC-CC provides loans in amounts from $2,500 to $200,000. It closed 34 loans in 2015, totaling $780,000. Even still, there are limits to what they can do with lending.

“Lots of people pass through tough times. One’s personal credit is not necessarily a reflection of what they can accomplish in the future. It might be a divorce, it might be medical payments from an illness, we don’t know. CDFIs take that into account, but with equity investing you don’t go through the process of pulling somebody’s personal credit,” he explains. “Or quite often you have a client with a great idea, lots of potential, but you can’t necessarily make the loan because of weakness in collateral, even with a relaxed perspective of a CDFI. Equity bypasses the collateral requirement.”

Chaplin admits equity investing is riskier, but the learning is worth the risk. Plus, in Jidan Cleaning’s case, The Enterprise Center is far from the only organization that believes they’re going on to great things. The company has become a perennial member of the Philly 100, an annual list of the area’s fastest-growing companies.

Over-leveraging is also a concern that equity investing helps to address. “If somebody’s starting a business or trying to expand, you don’t want to borrow too much debt, and sometimes you don’t have friends and family that you can raise the money from,” Chaplin says. That’s especially true of minority-owned businesses, given the growing racial wealth gap in the U.S.

“With venture capital the amounts are significantly higher,” Chaplin explains. “With us, I think there’s more patience. We don’t necessarily think the companies we’re working with are going to be listed on a stock exchange.”

The Jidan Cleaning investment is structured as three separate preferred share purchases over a three-year term. Preferred shares means that Claybrook retains control over business decisions. Jidan Cleaning does not have to make any monthly or yearly payments over the three years. At the end of the term, Jidan Cleaning must buy out (or have another investor buy out) The Enterprise Center’s shares. “In Jidan’s case, we structured repayment to have a floor and a cap,” Chaplin explains. “The floor is the amount of investment that we made, the cap is a number we negotiated.”

It’s not the first time equity investing has been tried as a strategy to support minority-owned businesses in Philadelphia. An earlier venture capital fund emerged with city government backing in the 1990s, sputtering and struggling to rally investors into its fund. It eventually invested $1.5 million in 14 businesses between 2004 and 2006, recovering only $225,000. Nine businesses paid nothing back. City Council Member Curtis Jones, who had a hand in running the fund in a previous job, recently said that looking back, there should have been more technical assistance to the businesses.

That shortcoming won’t be repeated in The Enterprise Center’s model. Claybrook started receiving business coaching and guidance from them around three years ago, and one of the big reasons she was interested in taking them on as an equity investor was the promise of even deeper technical assistance. In addition to his fund management duties, Chaplin already serves as a coach to many of The Enterprise Center’s clients, including Jidan Cleaning.

The capital for the equity investment came through a $505,781 grant to The Enterprise Center, from the Department of Health and Human Services’ $17.9 million Community Economic Development (CED) program. Making its first grants in 2009, CED has the goal of creating full-time employment with benefits for individuals making no more than 125 percent of the federal poverty line. Examples of other CED projects include commercial kitchens, manufacturing businesses, shopping centers and grocery stores, restaurants, business incubators, and more.

Chaplin says he was very surprised to learn what the source of the capital was when he came on board in December. (“If the focus is creating jobs, you can understand it,” he says.) He came in with two decades of experience in traditional banking, at other CDFIs in the Philly area, and also in development finance in his native Jamaica.

The Enterprise Center will make one more equity investment out of the original grant, into Little Baby’s Ice Cream, another Philly-based small business. They are going through the CED grant process again this year to grow their equity investing fund, perhaps making another two or three equity investments this year.

The CED program’s focus means the fund will remain strict about the companies in which it invests. Chaplin already had to look away from at least one otherwise attractive investment into an IT company.

“Under normal circumstances, it’d be a great company to invest in, but that’s not necessarily the focus of the funds we have. It’s getting low-income people to have sustainable, long-term jobs. Those are the companies we’re looking at,” he says.