New Orleans’ New Normal Is Leaving Many Residents Farther Behind 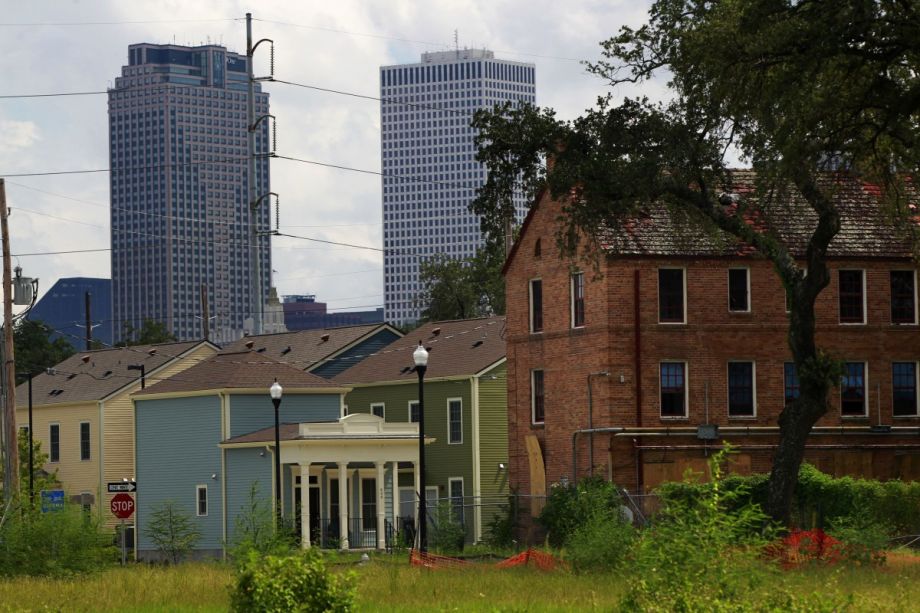 Ten years after Hurricane Katrina and five years after the Deepwater Horizon oil spill, there’s evidence pointing to a healthy New Orleans economy. Job growth is steady; entrepreneurship is climbing; traffic through Louis Armstrong International airport is up 22 percent compared to 2008, a strong sign the tourism industry is booming once again. Even the end of the Cuban trade embargo has stirred newfound optimism in the Crescent City.

To the surprise of many prognosticators, the city appears to have picked up right where it left off, despite 2005’s $151 billion disaster. But that’s not a positive return to normal for everyone. Before Katrina, there was already a marked gap in wealth and economic opportunity along racial lines. That divide has only escalated. A new poll by the Kaiser Family Foundation and NPR noted that 70 percent of whites believe the city has recovered, while a majority of blacks believe it hasn’t. Further, black New Orleanians are significantly less likely to believe the city provides quality opportunities for young people and that it’s a good place to raise children.

Although New Orleans has been witnessing its best job growth since the 1990s, inequality has surged in lockstep: Poverty is rising, working hours per week are falling, and average wages are too. Earned income for working-age adults who are part of struggling families averaged $21,775 in 2013, several thousand dollars below the national poverty level. And the trails to prosperity are mostly blazed by whites — who hold 68 percent of the region’s good jobs.

Most job growth has been of the low-wage variety (a trend that has been plaguing the entire U.S. economy post-Recession). Only 33 percent of all jobs are “good jobs” — defined in the Brookings report as full-time positions with benefits, offering a chance for upward mobility and not requiring post-secondary education — and most of the job growth has been in sectors like retail, hospitality and services.

Correcting this course, if you prescribe to the “cluster theory” of Harvard Business School’s Michael Porter (as the authors of the Brookings report do), relies on congregating like-minded businesses into close proximity to one another. The prototype of this once-counterintuitive, now-mainstream theory is Silicon Valley — where higher-ed, private business and workforce training providers have all aligned around a singular, tech-specific goal. Brookings suggests New Orleans must do more to incubate industry clusters along the lines of what’s been built within the Puget Sound “energy-efficiency cluster.”

“New Orleans should put emphasis on policies that go beyond rewarding the relocation and attraction of individual firms and instead focus on the unique regional characteristics that support the growth of whole industry clusters,” the authors write.

But the traded industry (think manufacturing, energy) clusters in New Orleans right now are lagging wretchedly behind the national pace. There’s been negative job growth in the regional transportation and distribution sector since 2010 — not a good harbinger for the fourth-largest port city in the country by tonnage — and the only two traded clusters that haven’t been laggards are advanced manufacturing and business and professional services.

In conjunction with the federal Workforce Innovation and Opportunity Act taking effect last month, the authors see an opportunity in New Orleans to coordinate adult education efforts to sector-specific demands from the region’s petrochemical industry and water management industry (which is flush with money following the Deepwater Horizon spill). The state of Louisiana has already bolstered the process by funding two vocational-education programs, Jump Start and WorkReadyU.

Not all economists think that focusing worker training in such a way is a surefire strategy to encourage upward mobility and “good job” attainment for disadvantaged minorities; some believe the cluster theory is a waste of time and resources. “Hundreds of regions all over the world have spent billions on such efforts; practically all have failed,” writes Vivik Wadhwa in the Chronicle of Higher Education. “All of those are well-intentioned efforts to build Silicon Valley-style technology hubs, but they are based on the same flawed assumptions: that government planners can pick industries they want to develop and, by erecting buildings and providing money to entrepreneurs and university researchers, make innovation happen.”

For their part, the authors of Brookings’ “Opportunity Clusters” note that their new report is “a starting point for further analysis and local discussions on what these findings mean for existing policies and strategies,” and they “hope this analysis sparks greater awareness among citizens and leaders and catalyzes collective problem-solving … .”

Cluster theory or not, it’s imperative that New Orleans policymakers work to boost the prospects of residents with innovative education and employment initiatives. With the coming 10-year anniversary of the Hurricane, the city will find itself in the national media spotlight once again — at a time when it has the third-worst case (18.2 percent) of disconnected youth of all metro areas and only 40 percent of adults have completed post-secondary education. Post-Katrina, the city gutted the public education system in a revolutionary experiment, one which might end up aiding the future workforce. But what to do in the present, as the Brookings report pinpoints, is something desperately calling for more attention.