New Orleans Has Not Fixed Its Flooding Problem – Next City

New Orleans Has Not Fixed Its Flooding Problem 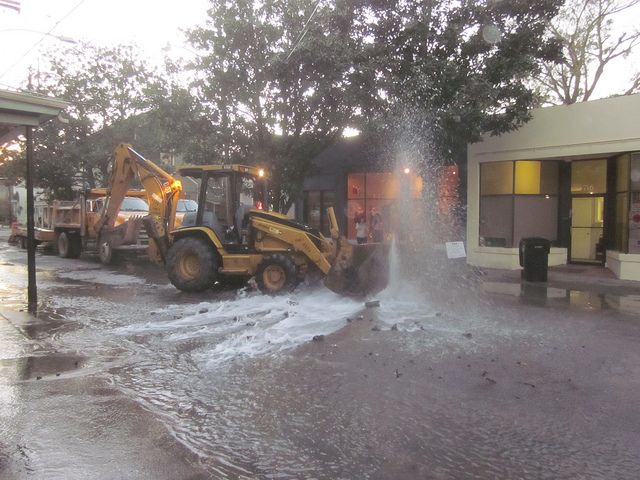 On August 29, 2005 — eight years ago on Thursday — Hurricane Katrina hit the Gulf Coast and federal levees failed in New Orleans, flooding the city. We honor the lives interrupted or lost to the deluge by turning our attention this week to the city’s recovery.

On the morning of July 23, the residents of the Carrollton neighborhood in New Orleans woke up to a flood. Shin-deep water swirled through the streets. Cars were up to their bumpers in murky water. Millions of gallons covered the roadway to a depth of more than two feet.

The deluge was not the result of a storm surge or drenching rain. This was a more localized emergency, caused by the rupture of an 80-year-old water main.

As SWBNO crews worked around the clock to repair the break, some 24,000 residents and businesses across the Uptown, Central City and Garden District neighborhoods were informed that they needed to boil their water before drinking it, a situation that went on for days. It was just one of at least six “boil-water” events in recent memory, all due to aging infrastructure.

These system failures are symptomatic of the city’s continued vulnerability to water-related disaster eight years after Hurricane Katrina. This week, New Orleans marks the anniversary of the storm that many feared would wipe it out completely. While many things have changed in the interim years, infrastructure remains a major point of weakness.

Thomas and other local experts say that even as the city’s levee system has been reinforced, to the tune of $14 billion, to protect against a Katrina-style storm surge, New Orleans remains at grave risk of watery catastrophe. “Inside that bowl,” Thomas says, referring to the low-lying part of the city within the levee walls, “we are all the more vulnerable to rain flooding.”

The city’s hurricane-damaged water management system, with its antiquated and decaying pipes and pumps, is under myriad threats “from soil subsidence, rising seas, and increasing storm severity,” according to the task force report. Each threat is connected to another. Subsiding soil, for example, puts additional stress on aging pipes like the one that broke in July. Clogged catchment basins exacerbate flooding in the event of a storm or a water main break. More runoff increases the burden on pumps already stretched to their limit.

SWBNO estimates that up to 40 percent of the city’s treated water is lost to underground leaks. According to the report, SWBNO’s proposed fixes, amounting to $2.3 billion, “do not introduce more sustainable protections that are needed to ease [the] burden on the city’s ‘pipe-pump-canal’ system.”

Thomas says that drainage and stormwater protection are as vital as coastal restoration and levees for a city that, more than any other in the U.S., knows just how devastating flood damage can be.

But the humble drainage system — where runoff from streets, parking lots and buildings meets the complicated network of pipes, canals and pumps stitched together over the last couple of centuries — has been an afterthought in the post-Katrina era.

Since the storm, Thomas points out, there have been “several hundred” flood claims filed in New Orleans, all unrelated to hurricanes. It doesn’t take a “storm of a lifetime” to cause damage, Thomas says. “A five-year storm can cause widespread flooding in this town.” The existing system can barely handle the type of rain event that is routine on an annual basis.

The rehabilitation and modernization of the system is made more difficult by a patchwork of governance. Thanks to a long-ago bureaucratic decision, the city’s underfunded Department of Public Works controls 19,000 catchment basins and all drainage pipes under 36 inches in diameter, while SWBNO controls pumping stations, canals and bigger pipes.

“Drainage is as important as the other things,” Thomas says. “But comparatively it has not been enhanced. This is not just about potholes in your roads and clogged drains. This is about your neighborhood continuing to flood.”

The report puts it this way: “The city’s current stormwater protection structure is akin to financing a new highway without investing in the connecting roads and onramps to use it.”

The task force recommends a package of remedies, including:

In the months to come, Watermark will continue to look more closely at the proposed fixes to the New Orleans stormwater system and at pilot projects in the region.