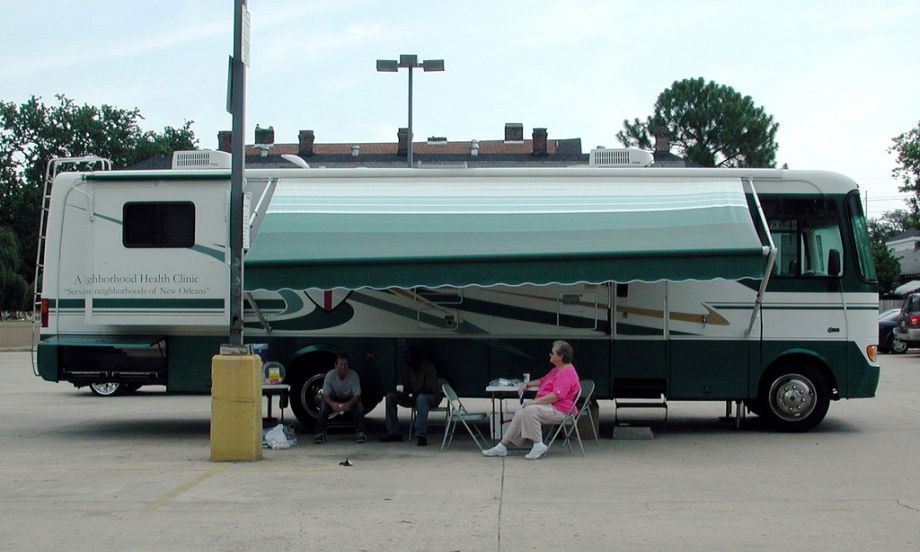 In this photo from 2007, a mobile clinic provides healthcare to the Mid-City neighborhood of New Orleans. Photo credit Bart Everson via Flickr

In 2005, after floodwaters devastated most of New Orleans, doctors and nurses set up shop in the most rudimentary places: ice chests on street corners, neighborhood grocery stores, spare sections of homeless shelters. As displaced residents returned after Hurricane Katrina, medical staff adjusted locations, hours and even the type of care they offered, depending on what was needed.

Moments like these are rare in the field of medicine, which is so often hidebound by payment models and protocol. “We put the population in front and evolved the model to wrap around the patients,” says Dr. Karen DeSalvo, who helped to create what became a citywide network of safety-net clinics and continued to work closely on the issue during her tenure as city health commissioner.

Spurred by generous post-disaster funding, 52 neighborhood clinics in four parishes (Louisiana’s term for counties) quickly evolved and have largely replaced a less-efficient pre-Katrina system. As the Affordable Care Act and its wave of newly insured patients force cities to ramp up numbers of primary-care clinics despite a national primary-care doctor shortage, the New Orleans experience could prove instructive, says DeSalvo. “New Orleans had some of the lowest rates in primary-care providers – it used to be at the bottom of the pile. This shows that you can quickly build primary-care access. It can be done.”

The New Orleans clinics also broke new ground by pairing mental and physical healthcare, sharing electronic records, agreeing on uniform coding for common conditions such as diabetes – which sometimes carried a number of different codes even within the same hospital – and by determining payment based upon certain indicators of quality, including patient-satisfaction ratings.

The fast-moving process was able to create distinctly different clinics for patients, because each clinic expanded based on existing strongpoints such as mammography, for instance, or dental care, med-school training, or Latino or homeless patient outreach. “It wasn’t as though the flood walls broke, there was water, and somebody said, ‘We’ll create 88 medical homes and XYZ,’” says DeSalvo, likening the process to a jazz performance rather than a conductor-directed, structured symphony. “Everybody had a strength, like an instrument,” she says.

The network reaped national acclaim. “After the healthcare safety net was destroyed in New Orleans, they built something new and better from the ground up,” says Melinda Abrams, vice president of delivery-system reform for the Commonwealth Fund, which has supported evaluation of the New Orleans network and finds it greatly improved, although “not a grand-slam on every single dimension.”

Its weakest point may be lack of sustainability. Despite its successes, the New Orleans clinics have yet to find a stable source of funding to cover working-poor parents whose income tops $2,801 each year – Louisiana’s paltry Medicaid threshold for non-disabled adults – but is less than $11,670 annually, which would qualify them for subsidized care under the Affordable Care Act. Unless Louisiana accepts Medicaid expansion, the clinics will always need financial help providing care to those parents and another broad segment of the city’s population: low-income single adults, who are never eligible for Medicaid in Louisiana unless they have children or are pregnant.

At one point, it looked like stability was close, because the uninsured patients would have been covered by Medicaid if Louisiana had chosen expansion. Instead, funding is slated to run out this summer, the latest in a series of near-death experiences for the network. “It’s a constant crisis,” says Susan Todd, executive director of 504HealthNet, a nonprofit clinic collaborative.

Before Hurricane Katrina, there were a handful of safety-net clinics, but most patients went through Charity Hospital, known as Big Charity, which served as the hub of a system of public hospitals in Louisiana that provided care for the poor. The massive concrete building near City Hall may have been built into the shape of an H for better air flow, but legend says it was in honor of Gov. Huey P. Long, the egalitarian egoist who commissioned the new hospital in the 1930s.

The hospital’s care was also legendary. Politicians and musicians born there proclaim themselves “Charity Hospital babies.” The staff was so trusted that some people would go nowhere else, even if they landed a job with insurance. But the hospital’s walk-in clinics and emergency rooms became increasingly overloaded, especially in the days before Katrina, as it was hit with repeated state cutbacks. To see specialists, patients often faced year-long waits. It was a system badly in need of reform and, after Katrina, the state shuttered the whole building.

The city’s handful of existing safety-net clinics first worked with other healthcare providers to see patients from makeshift locations, but they also wanted to rebuild better and provide care that better addressed patients’ needs.

For instance, doctors found that returning residents not only suffered from physical ailments but also with anxiety, depression and post-traumatic stress disorder brought on by the disaster and its aftermath. “So we did something early that others are very keen to do: we integrated mental healthcare into primary care,” says DeSalvo, noting how – thanks to more flexible post-disaster funding streams – each clinic was able to assess patients’ mental health at intake and, if flagged, deliver cognitive behavioral treatment, a type of psychotherapy. Clinic staff found that addressing mental health helped improve physical health, she said. In those early days, under a better-funded holistic model, clinics also added legal-aid lawyers and social workers to their staff, to help people navigate post-Katrina New Orleans.

At its inception, the clinic network also structured its funding in an unconventional way that incentivized quality care, through criteria that included “mystery-shopper” patients who rated care and ease of access. These incentives, evaluations and expanded care were also made possible because the post-disaster funding that didn’t require typical fee-for-service models. Later, as the clinics shifted to more traditional Medicaid funding and were forced to shed some of the key mental-health and community “extras” that had been part of the network, DeSalvo could feel a change. “It brought home for me that how you’re paid really matters,” she said.

This time, saving the clinic network requires both matching funds from a tight Louisiana budget and a federal waiver to allow Medicaid to pay the clinics for patients technically ineligible for Louisiana Medicaid. If that’s okayed, the feds will pay roughly 61 percent of each dollar and the state will have to allocate the remainder from its general fund. The state legislature last week sent Gov. Bobby Jindal a budget that included a clinic allocation of $10 million, which will draw down an additional $16 million in federal money.

That money will last until June 2015, the end of the state fiscal year.

After that, it’s back to crisis.