With Few Official Resources, a Community Builds Its Resilience From the Ground Up – Next City

With Few Official Resources, a Community Builds Its Resilience From the Ground Up 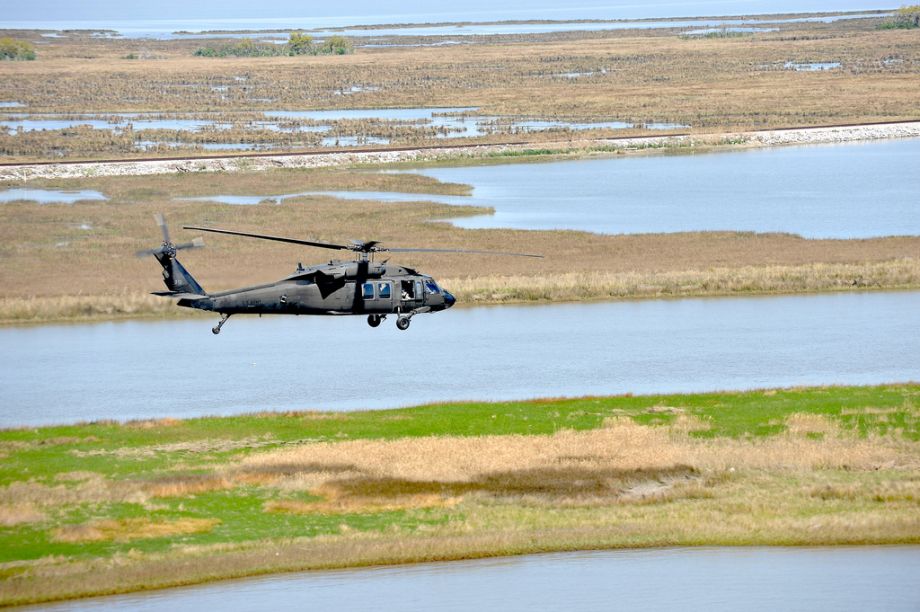 The lens through which one considers New Orleans’ resiliency must first point 50 or so miles south of the city, where the wetlands that comprise Louisiana’s coastal edge are dissolving into the Gulf of Mexico at a rate roughly equivalent to one football field per hour.

These wetlands are the quickly vanishing barrier that shields New Orleans from the hurricanes that buffet it nearly every summer – the levees, in theory, may protect the city, but it’s the wetlands that protect the levees. They are the first and perhaps most important line of defense against Near Orleans’ most common and severe natural threat, and they’re breaking down, with few convincing strategies put forth as a means to save them.

Since the massive levee failures in 2005 that flooded 80 percent of the city, the U.S. Army Corps of Engineers has constructed a comprehensive 133-mile chain of levees, flood walls, gates and pumps that, by the estimation of many experts, will do what they’re supposed to: protect New Orleans from what’s known as a 100-year storm, a weather event that has only a one percent chance of materializing in any given year.

But this by no means ensures the city’s safety through the next century. Hurricane Katrina is considered to have been a “400-year storm,” and as the climate warms and the coastal wetlands erode, it becomes increasingly likely that the levee system will be tested up to—and beyond—its capacity.

The logic that led to the adoption of the inadequate 100-year standard evolved from flood insurance programs—one indicator among many to suggest that property, not people, is foremost on decision-makers’ minds when it comes to flood protection.

“When you talk in terms of the value of a structure, the 100-year standard seems reasonable,” says John M. Barry, former vice president of the Southeast Louisiana Flood Protection Authority East. “But you’re talking about an entire community being devastated.”

The sheer cost of the levee system was a major consideration in determining the degree of its robustness. The state of Louisiana is already on the hook for $16 billion to the federal government for the levees, and the cost of the system’s repair and maintenance, which will soon be turned over to the state, will strain future budgets. But Barry notes that California, now famous for its public-money troubles, recently adopted a 200-year standard, proving that political will can trump resource shortages when authorities take storm protection seriously.

Advocates say the city has not bounced back evenly, and that disadvantaged communities still must rely on their informal networks for resilience. Photo credit: Ryan Southard via Flickr

In New Orleans proper, resiliency plays out in radically different ways along lines of race and class—which are essentially the same line in a city where black households earn 50 percent less than white households, compared to a national average of 40 percent. Nationwide, white households possess a median wealth 20 times that of black households. If we gauge a city’s resiliency by its ability to recover from a disaster, we must look at who has access to the recovery process—who is meaningfully involved in it and who benefits from it—and who does not. This issue will be at the forefront of next year’s mayoral elections, which will pit the president of the New Orleans chapter of the NAACP, Danatus King, against the incumbent Mitch Landrieu, the city’s first white mayor since 1978. King has repeatedly pointed out the inequities in the recovery process.

“I ride through the 7th Ward and the 8th Ward and you see areas that look the same as they did after Katrina hit,” King recently told reporters. “We can find money in this city to do all different types of things but somehow we haven’t been able to find money to fix up the streets, particularly in those areas hardest hit by the hurricane.”

In their book Resilience: Why Things Bounce Back, Andrew Zolli and Ann Marie Healey point to strong community networks as the most important determinant of resiliency in the wake of disasters:

“Resilience is not solely a function of the community’s resources (though those of course help), nor defined solely by the strength of their formal institutions (ditto). Instead we found resilient communities frequently relied as much on informal networks, rooted in deep trust, to contend with and heal disruption.”

New Orleans’ resiliency is directly tied to the city’s strong informal community networks, which came out en masse to rebuild at a pace that far surpassed projections made shortly after Katrina. Barry pointed out—and he’s far from the only one to notice—that it was precisely the incompetence of local, state and national government officials that spurred extraordinary citizen involvement.

Deeply rooted, informal community networks—many of which were created in the first place in black neighborhoods that have never been able to rely on ample help from official institutions—dramatically supported the efforts of individuals. An unprecedented level of philanthropic attention to the region and a bumper crop of do-gooder transplants augmented citizen involvement. But the chaotic environment following the flood opened up space for developments that have fractured communities upon which New Orleans’ resiliency depends.

These include, but are by no means limited to: bureaucratic obstacles put in place that prevented many poor people from returning to the city at all; the demolition of all the city’s major public housing complexes, which were also crucial centers of cultural creation; the demolition of Charity Hospital, which provided health care primarily to poor African-Americans, and the subsequent razing of a predominantly black neighborhood to build a new hospital complex; the inequitable distribution of federal funds to support home-rebuilding and businesses; and the displacement of longtime residents from historically black neighborhoods by gentrification, largely tied to the influx of relatively affluent white people after the flood.

“Katrina offered us a lens to see who is left behind in our society,” says Bill Quigley, a local civil rights attorney and professor at Loyola University New Orleans. “When Katrina was in the Gulf and coming towards us, those with resources fled to family and hotels outside of the danger zone. But a hundred thousand people were left behind. The elderly, the sick, the poor without cars, the disabled, lots of moms and children. They were who the world saw abandoned after Katrina hit. Once the city was emptied the challenge became how to return. And again, the same people were left behind. You can plot who had the least chance of making a timely and resourced return if you plot the intersection of race, gender, class, age and ability. The very old and the very young, the sick and disabled, the working poor and single moms with kids, and overall African Americans were again left behind. Tens of thousands never made it back. The city is smaller, whiter, and more prosperous than it was, not because of economic development, but because of who was able to return.”

The tumult after Katrina did provide an opportunity for several positive developments at the official level that fortify New Orleans’ resiliency. Community planner and activist Linda Usdin points to the consolidation of formerly fractured government entities such as the assessor’s office and the levee board as points of progress, as well as the creation of the Office of the Inspector General, whose task is to detect fraud and abuse and promote efficiency and effectiveness in city government. Corrupt officials have long hindered meaningful reform in virtually every aspect of New Orleans city government and deterred widespread civic engagement. But in the frenetic atmosphere of citizen action post-Katrina, civic engagement is at an all-time high in the city. Despite the fact, as Usdin notes, that engagement is up primarily among people who have had positive experiences engaging with official systems—which does not include many poor black New Orleanians—there have been clear victories. For example, advocates who had been working with little progress to reform the juvenile justice system for years prior to Katrina convinced the New Orleans Juvenile Court to begin a strategic planning process to develop a plan to rebuild the entire system less than a year after the storm.

The brilliant response of average New Orleanians in the wake of the 2005 flood proved their dedication and love for the city, which bodes well for its overall resiliency. Yet, the process has taken its toll on many of the very people who constitute the city’s strong fabric, and without better and more equitable support from formal institutions it is unclear how New Orleans will fare in the face of future disasters. The problems that result from the marginalization of the city’s majority-black population—and that hound the city as a whole—cannot be addressed in a piecemeal fashion, but require a holistic approach. New entities such as the New Orleans Coalition on Open Governance, financed by George Soros’ Open Society Foundations, are making headway in forcing decision-making apparatuses to operate in a more democratic and inclusive manner, but the process is slow.

As Usdin says: “We can improve individual systems, but if we don’t make more open and accountable government structures, we’re not making the foundational changes we need.”