New Orleans Bike-Share Can Start Off on Promising Path 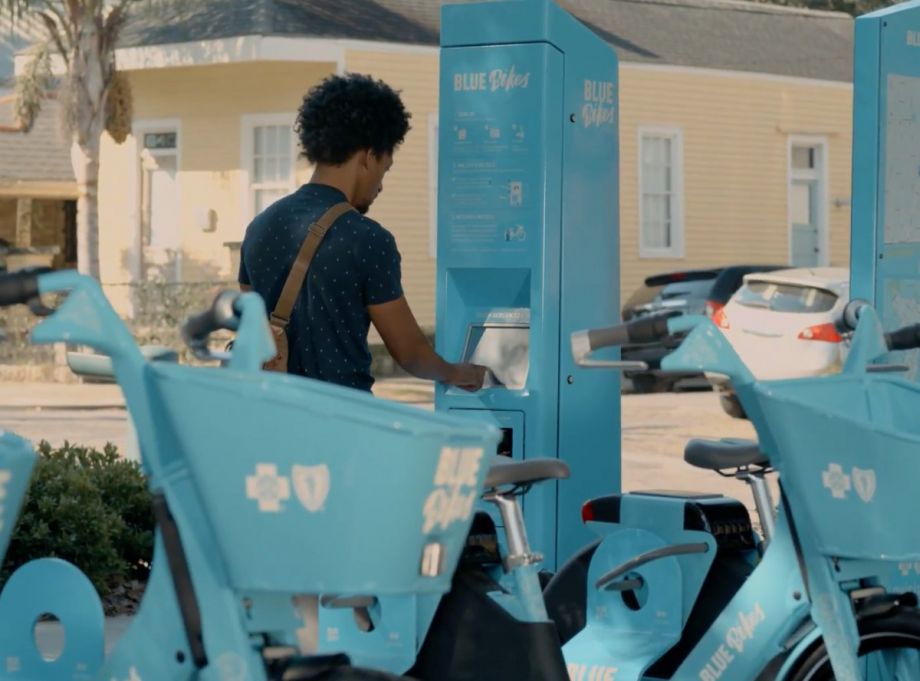 With the launch of bike-share this month, New Orleans residents will see 70 stations installed throughout the city over the course of the next several weeks. While other transportation amenities in New Orleans’ downtown areas, like the new streetcar line bordering the French Quarter, have come under criticism for being designed for tourists instead of locals, the city says that the Blue Bikes program is built with residents in mind. That could signal good news on everything from mobility to jobs.

Bike-share has demonstrated a capacity to increase access to jobs for low-income residents across the United States, says Kate Fillin-Yeh, strategy director at the National Association of City Transportation Officials (NACTO).

“Bike-shares can really show how closely tied physical mobility is to economic mobility,” says Fillin-Yeh. “You can’t have a job if you can’t get there.”

Fillin-Yeh says that because bike-share use can be cheaper than buying gas, and can help avoid cumbersome bus transfers or parking fees, the systems can really help people traveling short distances get to work at a low cost. She notes that not only can bike-shares connect low-income residents to jobs, they can also catalyze more ridership citywide by building awareness and prompting investment. Cities are more likely to paint more bike lanes, and drivers are more likely to become accustomed to higher volumes of riders, in turn incentivizing more biking overall.

The need for expanded job access is certainly evident in New Orleans, where in 2017, only 11 percent of jobs were reachable in 30 minutes or less without a car, and where black male unemployment was 44 percent in 2016. The city has made some progress: Since 2011, New Orleans has more than doubled the number of bike paths and lanes. But for whom exactly, has the access been improved? That’s the question a new report asks, released by the National Complete Streets Coalition, local advocacy group Bike Easy, and Smart Growth America. By evaluating the complete streets approach to increasing bike and pedestrian resources from a health equity perspective, they found that despite an increase in biking facilities throughout the city of New Orleans, the most unsafe conditions still exist in high-poverty areas. In New Orleans and neighboring Jefferson Parish, 36 percent of people live in high-poverty census tracts, but more than 67 percent of crashes involving people biking or walking occur in these areas. And while blacks in New Orleans only make up about a quarter of observed ridership, they account for almost half of bicycle fatalities. These findings suggest that more resources and investment are needed in the form of infrastructure improvements and driver education efforts in these high-poverty areas.

For its part, the city is trying to use the bike-share program to add those resources — at least in Orleans Parish. To ensure the Blue Bikes meet the needs of the community, including those in low-income neighborhoods, the city conducted a robust community engagement process to determine the location of the bike stations. They presented at over 25 neighborhood meetings, and according to the city website, more than 100 residents participated in workshops since January to provide input. Bike Easy and other partners identified over 250 potential sites for bike stations, based on a criteria ranging from 24-hour access to being in sunlight to enable solar power. From there, residents offered feedback on where the stations should go based on more anecdotal data, such as street corners prone to flooding, or proximity to popular neighborhood destinations. A working group of representatives from various city departments and the Regional Transit Authority offered technical feedback on the residents’ requests, and online voting was available throughout the summer.

At the urging of Bike Easy, Blue Bikes launched with a low-income fare option too. Riders can use their Louisiana Purchase card (the state name for SNAP benefits) to get a yearly pass for $20 and a free hour of riding per day. Dan Favre, who heads Bike Easy, says that they are still working to create a cash payment option for riders who are unbanked.

While the city’s bike-share service area right now is limited to a few miles surrounding the French Quarter and Central Business District, officials say it’s designed that way because most jobs are in that area, and most riders wouldn’t bike more than a few miles to commute to work. According to the city, about 50,000 people live in the Blue Bikes service area. About 45 percent of residents in that area are black, and about the same amount are white. (In the city as a whole, nearly 60 percent of residents are black.) There is a larger percentage of Hispanic residents in the Blue Bikes service area than in the city as a whole. In terms of socioeconomic status, the service area seems representative of the city overall: The median household income in the service area is $35,525 while citywide, it is $37,227.

Still, Favre says that despite its best efforts, he thinks the Blue Bikes community engagement process fell short in some ways, particularly when it came to including people of color and low-income residents.

Fillin-Yeh points to how the city of Philadelphia partnered with local groups to identify neighborhood bike ambassadors to advocate for their community needs. Bedford Stuyvesant Restoration in Brooklyn, a decades-old community development corporation, set out to demonstrate how bike-share could serve residents in everything from job access to fitness, which led to increased ridership on Citi Bike. Fillin-Yeh says the CDC made a concerted effort in their marketing to advertise the program in both Spanish and English, and worked closely with the housing authority to make sure people living in public housing knew about bike-share’s benefits.

Eventually, Favre says he hopes to work out arrangements with big hotels and restaurants to subsidize bike-share access for some of the over 80,000 employees in the New Orleans hospitality industry. Many earn low wages, and most travel for their jobs to the French Quarter and Central Business District, where it is difficult to park.

According to Fillin-Yeh, corporate packages are popular in cities like New York, Chicago, Portland and San Francisco. Companies purchase bulk bike-share passes to offer to all employees as benefits. She has yet to see a program tied to the wage-based employer model, like was Favre is considering, but she also points out that there is a lot of room for creativity and new ideas.