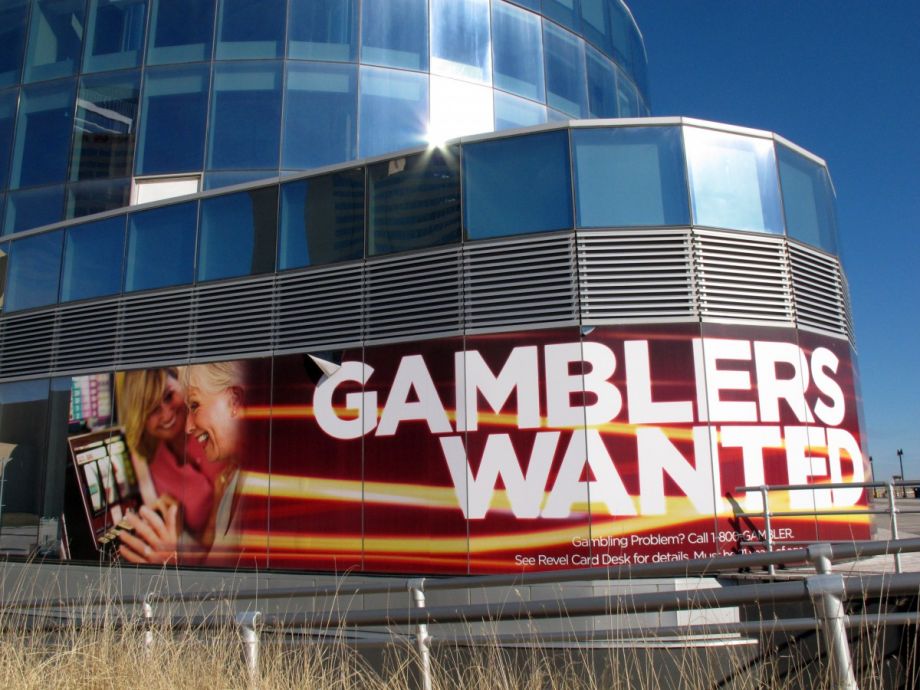 The Revel Casino Hotel opened in Atlantic City in April 2012 and filed for bankruptcy protection in March 2013. (AP Photo/Wayne Parry)

On a cold, blustery day in mid-April, it’s easy to see why Atlantic City, New Jersey didn’t make it as a Miami or Las Vegas-style resort. When the wind whips off the ocean across the boardwalk, the only place to hide is inside a casino. If that’s not the scene most tourists or conventioneers want, well, better go someplace where the temperature reliably stays above 50 degrees year-round.

That isn’t to say the town is dead. Near the off-ramp for the Atlantic City Expressway is The Walk, a shopping district stocked with name-brand stores and bustling with flirting teenagers, strolling elderly couples, and parents lecturing children on the pleasures of only purchasing sale items. Just off the Boardwalk, the Irish Pub is full for dinner even on a weeknight.

But a block behind the towering casino-hotel complexes lurks a strip of pawn shops and check-cashing fronts. The old main drag, Atlantic Avenue, is marbled with empty storefronts. Many of those that are in business seem to be doing a half-hearted impression of a red-light district. Even here there are exceptions, including Indian restaurants, Vietnamese grocers and Spanish-language delis, reflecting the gambling mecca’s stunning diversity.

It is this diversity that swept the new mayor, Don Guardian, to a surprise victory in last year’s general election against incumbent Lorenzo Langford. Like many urban areas in the Northeast and Midwest, Atlantic City has long been a town where the Democratic primaries were the only elections that mattered. But last year, as the Philadelphia Inquirer reported, Guardian was able to run as a Republican with the support of the city’s large Asian and Hispanic populations.

Not that Guardian sounds anything like the brand of radical right-wingers who have gained notoriety in the last few years. He is a throwback to the kind of liberal Republican that used to be common throughout the Northern and West Coast states and can still be found at the local level. Guardian speaks highly of organized labor (“this is a union town”), police accountability (he’s for body cameras on officers), and housing policy (“if we are giving any money, I am doing my very best to ensure that every project that comes into town is going to be 80/20, market rate to affordable”).

Guardian is a voluble guy, tirelessly reeling off a list of the city’s challenges and the policies and developments he will champion to fix them. It’s easy to see why every Atlantic City resident asked about the new mayor expresses enthusiasm and confidence.

He’ll need it. In the last year, the casino economy contraction began to devastate the city budget. Since Pennsylvania became a competitor in 2006, ending Atlantic City’s monopoly on regional gambling, the casinos’ revenues have fallen every year. At the beginning of 2014, the Atlantic Club, one of the weakest performers, closed and took 1,600 jobs down with it. It is widely expected that more casinos will follow suit.

Years of declining profits have blown a hole in the tax base, especially since the casinos began suing the city for taxing them as though their properties were worth as much as they used to be.

Five years ago, the city enjoyed a tax assessment of over $20 billion, but as of January the number was only a little over $11.2 billion. The casinos have been taking the city to court — and winning. Worse still, the city must shoulder the burden for the Board of Education, which is not required to pay back the money it received. The city’s most successful casino, The Borgata, wrested back $50 million (plus interest). To pay them back, Atlantic City had to bond for $260 million. Residents also suffered a 22 percent increase in property taxes last year, and face another hike this year.

“I feel like a pastor. I have a great bully pulpit, and I can talk people into helping us, but I don’t necessarily have any money,” says Guardian. “As a city we need to be trimming about $10 million a year for the next three to four years, through a whole lot of efficiencies and having several hundred fewer employees. If we keep doing everything the way we’ve been doing we’d need a 47 percent tax increase.”

Austerity alone cannot cure Atlantic City’s budgetary woes. Outside help will be needed and that was unlikely given the toxic atmosphere between former Mayor Langford and state officials. (He famously traded barbs with Governor Chris Christie after Hurricane Sandy, hence the latter’s post-election statement: “I’m grateful that Lorenzo Langford is gone. That should be no shock to anyone.”) With a fresh start, Guardian is in talks with Christie and New Jersey Senate President Steve Sweeney and recently applied for $20 million from the Department of Community Affairs to bridge this year’s budget gap while he cuts municipal government’s services and payroll. He has expressed interest in Economic Recovery Grant funds from the New Jersey Economic Development Authority. He is banking on Atlantic City’s role as economic anchor to the region to incentivize state support.

At the north end of the Boardwalk, Revel stands as a monument to the last time the state helped Atlantic City: When private investors backed away from the half-built tower, Christie offered $261 million in tax reimbursements in exchange for 20 percent of the presumed profits. When the new mega-casino opened in 2012, Christie hailed it as the savior of Atlantic City. Instead, it never turned a profit, quickly went bankrupt, laid off a couple thousand employees, and knocked the rest of them down to part-time.

“When I came to Revel they promised me many things,” says Johanna Mella, a hotel cleaner at the new casino complex. “I used to work at Harrah’s casino. It was very different there. The benefits were very good. Here they don’t respect the workers, there is no security. They don’t even want me to speak my language. We need protection. I’m not sure if it is going to be there tomorrow. It isn’t what I expected.”

The largest casino workers’ union, Unite Here local 54, is trying to organize Revel—the only non-union casino in town. They have started gathering signatures, and have signed on about 65 percent of the casino workforce. “We clearly have a majority of workers,” says union president Bob McDevitt. “We just want a card check agreement, the same deal as everyone else who came to Atlantic City.”

Guardian seems to be trying to remain at a remove from the standoff. Atlantic City may be a union town but even so, the new mayor doesn’t seem to be interested in wading into an acrimonious debate.

Still, he isn’t afraid of pointing out the benefits of organized labor. “Of the people who might be interested in buying the property, they have union workforces [elsewhere], they understand how to run a union ship,” he says. “Ultimately a bargaining agreement just makes things very smooth.”

The union’s other demand is a little trickier. As the owners look for buyers, they want a guarantee that the remaining workers will not be laid off in the event of a sale. City Council recently issued a resolution in support, but Revel’s ownership have not, as of yet, responded.

Regardless of Revel’s ultimate fate, the casino industry will clearly never again be the economic anchor for coastal South Jersey, and Guardian seems to understand that. He is now working with Stockton College, which already has a small footprint in town, to put together enough land for a serious campus and attendant parking. He also touts Atlantic Cape Community College’s soon-to-be-completed expansion of a culinary arts building.

Guardian and other policymakers have other plans afoot too.

They hope to revive the convention trade that Atlantic City largely sidelined while the casinos were enjoying their monopoly. Guardian dreams of building Miami Beach-style high-rises along the north end of the Boardwalk, just beyond Revel, although the obvious objection there is that New Jersey’s weather isn’t quite as accommodating to that sort of thing. Ground will be broken on about 450 units of non-high-rise housing this year, while the historic Gardner’s Basin, with its artsy vendors and a justly famous diner, will be expanded in the coming years, and the old Boardwalk connecting it to Ventnor, a downbeach town, will be restored.

But the sheer scale of the Atlantic City dilemma is hard to fathom. The city never developed beyond the casinos, which would have distracted from the slots. And while the industry never supported the city like residents hoped — indeed, they strangled many small businesses and put a damper on street life beyond the boardwalk— they did provide good, middle-class jobs for working-class people throughout the region, and gave Atlantic City a tax base.

“How do you get back to that moment where people without a college education can get a decent job, take care of their families, and not get poorer every week,” says Bryant Simon, a professor at Temple University and author of Boardwalk of Dreams. “That’s the American dilemma getting played out in Atlantic City.”

Most of Guardian’s plans sound worthwhile, and it’s hard not to get swept up in his enthusiasm, but it’s even harder to imagine the city rebounding with a new identity anytime soon.