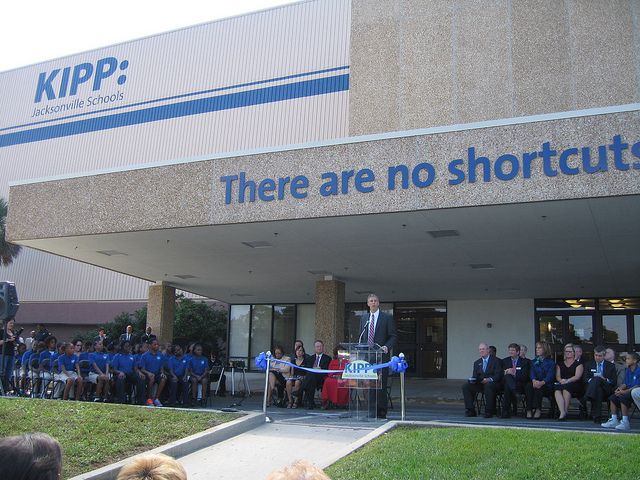 A KIPP school in Jacksonville built with the help of NMTCs. Credit: Florida Community Loan Fund

The federal New Market Tax Credit program, introduced in 2000 to spur investment in low-income communities, is set to expire at the end of the year.

The premise behind New Market Tax Credits, or NMTCs, is simple: While there is certainly both need and opportunity in underserved communities, there isn’t much capital or private sector money. So developers, business leaders and entrepreneurs in these areas — dubbed “New Markets” — received federal subsidies to encourage more investment.

Their end goal? To springboard job creation and economic development. Indeed, in their relatively short lifespan NMTCs have created more than 550,000 jobs and leveraged $60 billion in capital for distressed areas, according to the Treasury Department’s CDFI fund. That’s less than $20,000 per job created.

And this isn’t stadium welfare or a fat tax break for corporations. This is a smart subsidy that not only spurs development in neighborhoods that need it, but which pays for itself. From the New Market Tax Credit Coalition’s 2012 report:

According to the Government Accountability Office, the cost to the federal government for NMTC activity in 2010 as measured in terms of revenue lost totaled $720 million. In that same year, the federal tax revenue directly generated by NMTC financed operational activity alone totaled $1.1 billion, providing nearly a 50% return on the federal investment.

In other words, the revenue completely offsets the cost of the subsidies, which have expanded the tax base and created jobs — 124,000 permanent jobs were created in 2010 as a result of NMTCs — all in the wake of a recession.

The funds go to education, too. A KIPP school in Jacksonville, Fla., for instance, received $15 million in NMTCs. So the grants not only create jobs, but also invest in future generations.

The program expired at the end of 2011 only to be extended in January 2012. Rep. Richard Neal (D-Mass.) sounded optimistic about an extension at the New Markets Tax Credit Coalition’s annual conference in Washington, D.C. last week, where he gave the keynote address.

In June, senators Jay Rockefeller (D-West Virginia) and Roy Blunt (R-Missouri) introduced legislation to have the program extended permanently. At the moment, however, there’s no sign that it will continue come the new year. Which seems crazy, given both the demand and the program’s success. As you can see in the chart below, the amount of credits applied for each year greatly outpaces what actually gets handed out. (For what it’s worth, who wouldn’t apply for a tax incentive?)

I asked Alison Feighan at the NMTC Coalition if there is any alternative to the program. Are there any other ways to lure investors to low-income neighborhoods?

“In terms of scale, I don’t think so,” she said. “I don’t see other tools that can step up and take the place of this.”

The impact NMTCs have can’t be overstated. While they may not always look like huge engines of economic growth — North East Silicon Technologies Inc. in New Bedford, Mass. added only 20 jobs from NMTCs — they do give companies the incentive to expand. When companies in low-income neighborhoods expand, that means more jobs for residents who need a steady paycheck.