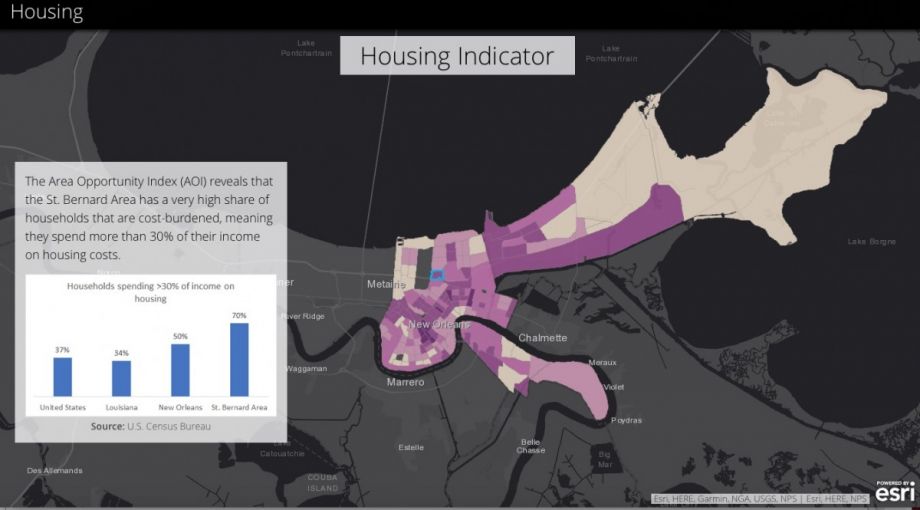 The so-called “zip code effect” — the idea that your economic circumstances are in part determined by where you live — is real, but teasing out the exact factors that go into that relationship can be complicated. Is it access to jobs and education? A more diverse community, with a range of incomes? Quality housing?

A new pair of interactive “StoryMaps,” from the UNC Center for Community Capital (CCC) and JPMorgan Chase & Co., and a complementary report aim to address those questions. The Assessing and Promoting Opportunity in Low- and Moderate-Income Communities report investigated two neighborhoods over an 18-month period, one in San Francisco and another in New Orleans, in very different circumstances. The purpose of the report, as its authors said, was to “shed light on which aspects of access to opportunity are universal — i.e. seem to be present regardless of setting — and which are more a matter of local particularities.”

Columbia Parc, in New Orleans, and Protrero Terrace and Annex, in San Francisco, couldn’t be more different. Although both sites have undergone or are undergoing a conversion from public to mixed-income housing, the contrast is stark. Columbia Parc is in a low-income neighborhood, where 57 percent of households are poor; it is the site of the former St. Bernard public housing development, which was closed after Hurricane Katrina and torn down in 2008. Protrero Terrace and Annex is in a wealthy community, where 58 percent of households are affluent.

The maps — one for San Francisco and one for New Orleans — highlight what is different about the two neighborhoods. In Protrero Terrace, for example, which is in the process of being converted to a mixed-income community, most residents have health insurance, and the neighborhood has a relatively low share of cost-burdened households, compared with San Francisco as a whole. Yet residents still struggle: no bus line serves Protrero Annex, and the lines serving the Terrace have been cut over time. The nearest bank and credit union branches are more than a mile away, so residents end up using local ATMs (and paying the associated fees) or check-cashing stores. These are issues similar to those faced by people living in Columbia Parc in New Orleans, even though the surroundings are quite different.

UNC’s CCC found two factors shared by both communities that may explain their access to opportunities. They write:

Friction of distance, which takes into account the amount of effort required to complete a journey and which implies that even a short journey can be perceived as daunting. This has relevance in each site, where interviews revealed that even when services and amenities were in close proximity, residents did not perceive resources to be accessible.…Lack of voice was raised in both sites by interviewees who expressed concern about residents’ limited participation in the decision-making processes that affect their lives.

Reducing “friction of distance” can be accomplished by reducing the effort it takes to apply for assistance. New York City did just this when it used design tools to improve the affordable housing lottery process, as Next City reported earlier this year. Service providers should also consider co-locating services with housing, and ensuring that services are offered in culturally relevant ways (e.g., in a person’s native language).

As for incorporating resident voices, CCC suggests that developers and planners partner with and invest in “place-based partners” that work closely with residents, such as community development corporations.

“Affordable, quality housing is necessary, but it is insufficient to promote household and community well-being,” the report authors write. “From residents and stakeholders in both communities, we learned that accessing and using services, resources, and opportunities is not just a matter of physical proximity. Other factors intervene to shape how opportunity is experienced: a lack of information and awareness, minimal social networks, a lack of cultural competency and empathy on the part of service providers, and larger community problems such as systemic racism and fragmented human service systems all act as barriers between residents and fulfillment of their hopes and dreams.”