Room to Grow for New L.A. Bike-Share – Next City 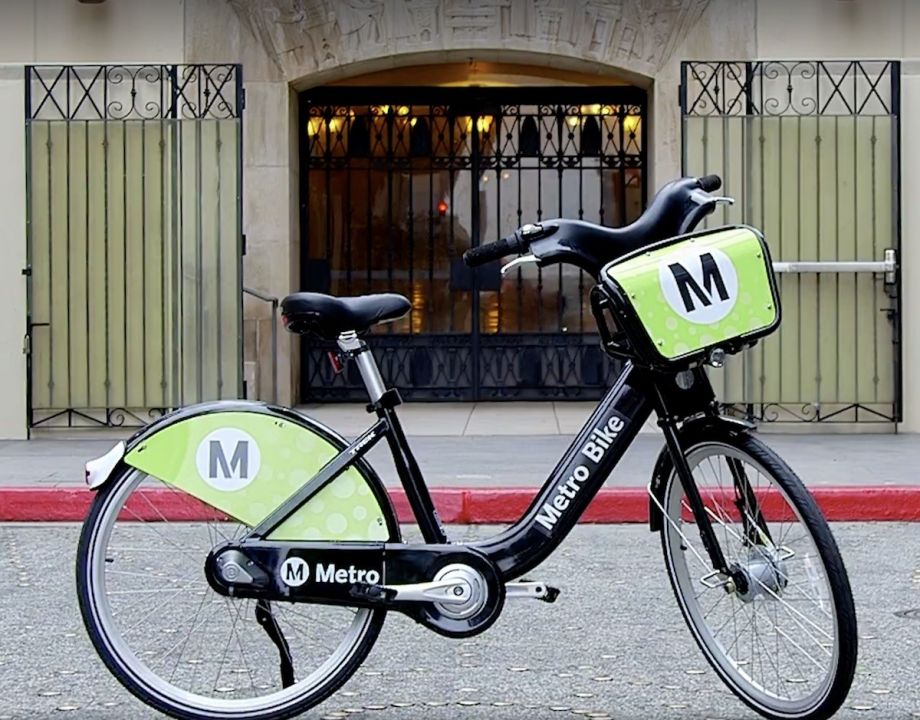 As most people who have visited Los Angeles — or even ever seen it on TV — know, the “best car city in America” is also one of the worst places to drive.

A Public Policy Institute of California survey found that more people in L.A. feel traffic congestion “is a big problem” than any other region surveyed, about three in four. Another survey of Angelenos found that far more worry about traffic and congestion than even public safety (55 to 35 percent).

Mayor Eric Garcetti, following in the footsteps of predecessor Antonio Villaraigosa, is working to change that. He has pushed to expand subway and light-rail service, implemented a Vision Zero program and released Mobility Plan 2035, a wide-ranging document addressing transportation in the city.

Only about 1 percent of Angelenos bike to work, despite the area’s generally flat terrain and balmy Southern California weather. That may change with the new bike-sharing program, launched July 7, Metro Bike Share.

The thousand bikes and 65 stations clustered downtown are a joint project between the city and the Los Angeles County Metropolitan Transportation Authority (Metro); both are chipping in funds but Metro operates the system, a first. Once they set up an account, cyclists can pay for their bike rides with their transit cards. Passholders pay $20 a month for unlimited 30-minute trips, and $1.75 per 30 minutes for trips exceeding the first half hour.

“We want to make it easier for L.A. County residents to get where they need to go and combine modes,” says Dave Sotero, Metro communications manager.

Bike kiosks are located near Metro rail and bus stations, as well as places of interest like libraries and museums. The agency hopes that Angelenos will ride Metro more if they can solve the first mile/last mile problem by bike. There’s a definite system emphasis on downtown, which, according to the local business improvement district, has more than tripled in residents in the past decade and a half (from 18,700 in 1999 to more than 60,000 in 2015).

Sill, not everyone is a fan of bike-share. “The road to hell is paved with good intentions — and with bicycle lanes on each side of the pavement,” one frustrated driver wrote in a letter to the editor at the Los Angeles Times. “Just who is running City Hall, the Sierra Club?”

And even some mobility advocates are skeptical. Anisha Hingorani, program and policy manager at Multicultural Communities for Mobility, says her organization ultimately believes that Metro Bike Share will make downtown more walkable, but there may be some growing pains.

MCM advocates for mobility improvements for low-income communities of color, and “the only people I’ve seen on the bikes have been, generally, white males,” Hingorani says, while granting that the program is still in its infancy. Since walk-up bike use isn’t even available until August, user demographics aren’t set.

“As a grassroots organization, we saw the bike-share coming to downtown, and we’ve seen how bike-share systems work around the country, and we know they’re designed for more affluent and white communities,” she adds. Her organization and some of the communities MCM works with were “a little suspicious” of the program.

“Our members were really like, ‘Is this the best use of public funds?’ Especially because we do have such poor street infrastructure in communities of color and we do have a systemic problem of traffic violence in these communities,” Hingorani says. “At the same time, there’s a lot of excitement that bike-share is finally coming, but there’s a lot of concern and we’re here to facilitate those concerns being turned into useful and constructive feedback.”

Some locals, she notes, saw the bike-share and the public investment that came with it as a harbinger of displacement.

Hingorani says her organization wasn’t brought into the conversation until late in the game, but is now working with Metro on how to make the system more equitable if and when it expands to the planned 4,000-bike network across L.A. County.

Metro says it distributed 40,000 discount codes for low-income residents to try the system, and while it didn’t meet with MCM, the L.A. Department of Transportation and Metro did have meetings with BIDs, council districts and “other stakeholders,” and had bike-share station examples and info booths at public events like CicLAvia, the largest open streets event in the country.

Ultimately, says Hingorani, MCM “applauds” bike-share for the benefits to pedestrians. “Since it’s been announced there has been more focus on how to increase bike lanes in downtown,” she says. “The intent is to get more people out of their cars and in doing so you’re making the street safer for everybody.”