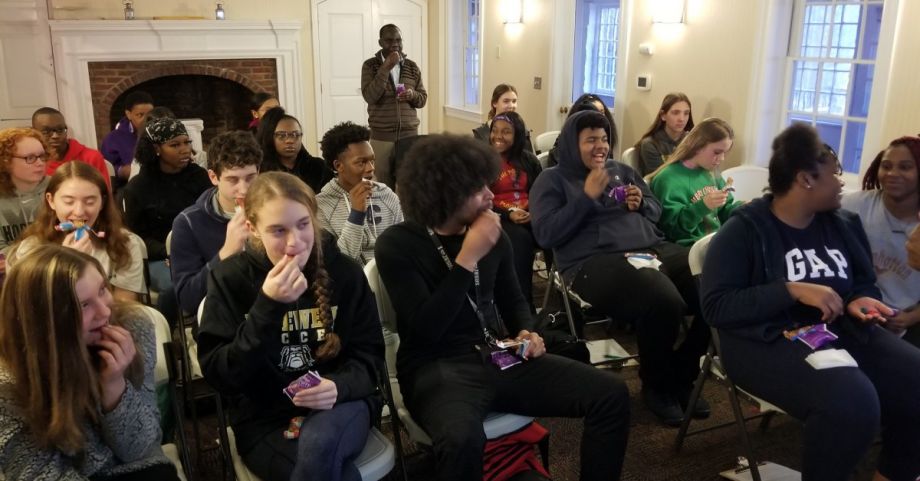 Mychael Holloway, 17, has been spending her time in quarantine on her phone. But she isn’t scrolling Instagram. Thanks to a newly launched environmental internship program, she’s photographing and identifying the plants around her home in Trenton.

Holloway is one of 30 students enrolled in Building Conservation through Diversity and Teamwork, a paid high-school internship program based in Mercer County, New Jersey. Participants include students of Central High School in Hopewell Valley, as well as teenage members of Trenton’s Boys & Girls Club.

After 10 hours of training on topics ranging from water quality to trail maintenance, interns are paired with a local participating nonprofit to conduct stewardship fieldwork. The program aims to train the next generation of environmental stewards, giving them crucial work experience and skills. But more importantly, it intends to help students of color prepare for jobs in the green sector, exposing them to the benefits of outdoor recreation in the process.

“I enjoy all the activities we do. I really enjoy going out and visiting different environments,” Holloway says. “It’s really helped me learn so many plants, and so many animals that I’ve seen.”

And according to Lisa Wolff, co-founder of the program and executive director of sponsor organization Friends of Hopewell Valley Open Space, she and fellow organizers also hope to connect young people from two communities that often don’t interact.

“The greatest way to break down barriers between Black and white is to provide exposure,” Wolff says. “I can tell you, ‘You should be nice to other cultures.’ That’s not the same thing as working hand-in-hand, as peers, as equals, with people of other cultures and really learning from them and getting to know them.”

Though it started earlier this year, the internship was put on pause after just three in-person training sessions, as Wolff and her colleagues worked to shift the coursework online. Now, Holloway and her fellow students are taking the remaining seven courses over Zoom and completing at-home assignments — like encouraging students to visit nearby parks and gardens and use an app, iNaturalist, to take photos of bugs, birds and everything in between.

Wolff says the program was initially intended to accommodate only 20 interns, but when staff at Central High School and the Boys & Girls Club notified students of the opportunity, demand was so high that she increased capacity to 40. Students were offered the option to be paid for their time, or to receive service credits for organizations or classes. When COVID-19 hit, however, all students were promised full pay for the time they put in, but were given the choice to continue with the program online or bow out.

“Surprisingly, about 75 percent of the people who were in the original internship have decided to continue with us,” Wolff says. “I think that retention rate is pretty good, since we had to change the whole way that the internship was going to look and feel. So, they like it, and they’re getting a lot out of it.”

The program is the first initiative of the Outdoor Equity Alliance, a group of land trusts, service organizations and school officials dedicated to combating environmental racism; making parks and public lands more accessible to people of color; and diversifying the talent pool of conservation professionals, a predominantly white field.

According to Aaron Watson, co-founder of the Outdoor Equity Alliance and executive director of Mercer County Parks Commission, it’s not just hard to find people of color working in Mercer County’s environmental sector. He also doesn’t see many people of color enjoying the parks he manages — even though the county’s population is nearly 40 percent non-white. Combatting that gap has been a major focal point of his time in his current role.

Watson says that he has often visited schools in Trenton to advertise the county’s parks and programming, hoping that his presence as a Black man in a leadership position would inspire students of color. While there, he often asks Black students why they don’t visit public lands as often as their white peers.

“I got the feeling they felt like they weren’t welcome out there,” Watson says.

To Watson, the now infamous encounter between Amy Cooper and Christian Cooper in Central Park, in which the white woman called the police on the Black birder and lied about him threatening her life, is a clear illustration of the core problem: People of color have been historically excluded from public lands, making them feel unsafe in outdoor settings.

That lack of exposure to the great outdoors has deprived many students of the numerous benefits nature can have to their mental and physical health, and even lead to many misunderstandings about local wildlife. Watson says that, after inviting students on hikes with him, many expressed they were scared of grizzly bears, mountain lions and wolves — animals not found in the area.

“It really disturbed me to see that a lot of these very same kids can walk down some of the toughest blocks in the city of Trenton and not feel one bit of fear. But take them on a hike in the woods and they’re scared to death,” Watson says.

And according to Watson, that unfamiliarity may also be why the conservation field is overwhelmingly white. If young people don’t spend time in nature, they won’t gain the experience they need to care for it for a living.

That’s why Building Conservation through Diversity and Teamwork aims to give students of color relevant skills and knowledge, but also time to have fun in the great outdoors. In the internship’s second session, students learned about mindfulness in nature and went for a hike to Baldpate Mountain.

According to Wolff, current events have posed both an obstacle and opportunity for the program. The pandemic — and all the social distancing requirements that come with it — make teamwork and relationship-building, one of the core goals of the program, difficult. Wolff is currently figuring out if the cohort, perhaps in smaller groups, can safely meet on a trail or another outdoor setting soon.

“Nothing beats hanging out with somebody and having something screw up and bursting out laughing together because how bad it was,” Wolff says. “You don’t get that as much in Zoom. The classes themselves are effective, but I really, really, really want that interaction.”

However, with the Black Lives Matter movement still demanding the nation’s attention, more people are talking about the need for environmental justice. As a result, the program and its founding coalition are gaining renewed momentum. Even though the program has yet to finish its pilot run, Wolff is in talks with Princeton University and Capital Area YMCA to see if it can be expanded and replicated elsewhere.

Still, Wolff is frustrated that that interest wasn’t present from the start of the program — especially when it came to funding. Wolff says that she received a small grant from the New Jersey Conservation Foundation to support a portion of the interns’ pay, but without the support of any other grants, she ended up raising the remaining $10,000 through GoFundMe.

“I’m happy right now that in the collective consciousness, people are understanding that this is an issue, but it’s been an issue for so long,” Wolff says. “It’s not like our time has come. This should have happened a long time ago.”

Still, Wolff and Watson are hopeful that the tide is turning, and that the internship program will mean seeing more people of color in Mercer County’s rich network of preserved lands — and maybe, in environmental careers, movements and recreation throughout the country.

Already, Holloway has been inspired by the program to consider using her creativity and love for nature to one day start an eco-conscious art business.

“Right now, we’re going through climate change and everything like that, and then some of the animals that we have might go extinct,” Holloway says. “So I think a business like that would be a good way to just show that we need to step it up, and we need to show the world that a healthy environment is what we need.”

This story was produced in collaboration with CivicStory and the New Jersey Sustainability Reporting project. We’ve corrected the spelling of Mychael Holloway’s name.