The Netherlands’ combative relationship with the sea is well known. American kids grow up hearing the story of Hans Brinker, who saved his village by sticking his finger in a leaking dike. The Dutch word “polder” has been used from Indonesia to New York City, inspiring new ways of reclaiming land and sharing lessons from centuries of experience. But even today, the Netherlands is constantly searching for new ways of securing and improving its fragile coastline.

The New Hondsbossche Dunes is a huge project that will replace existing dikes at Hondsbossche and the Pettemer seawalls — the last weak links in the extensively and heavily reinforced Dutch coast. Thirty-five million cubic meters of sand will be used to sculpt this vulnerable stretch of beach into a new recreational area that will attract wildlife and provide protection from the North Sea for another 50 years. Once the eight-kilometer project is completed, it will become Europe’s longest uninterrupted dunescape. The New Hondsbossche Dunes project is a joint venture between Van Oord Dredging and Marine Contractors and Boskalis for Hoogheemraadschap Hollands Noorderkwartier. The contract includes construction of the dunes, which has already begun, as well as management of the new shoreline for the next two decades. The construction phase should be completed by the end of 2015.

Historically, this part of Noord Holland has been the site of the Netherlands’ most serious struggles against the sea. After the devastating Sint-Elizabeth flood of 1421, work began on the construction of dikes in this same area between the villages of Camperduin and Petten. The Sint-Elizabeth flood actually wiped out the entire town of Petten; a century and a half later, during the Allerheiligen flood of 1570, Petten once again disappeared into the sea. Medieval dike construction was characterized by piled earth layered with seaweed and secured with poles. Over a short period of time, the rotting seaweed and natural compression created strong dikes that required very little maintenance. 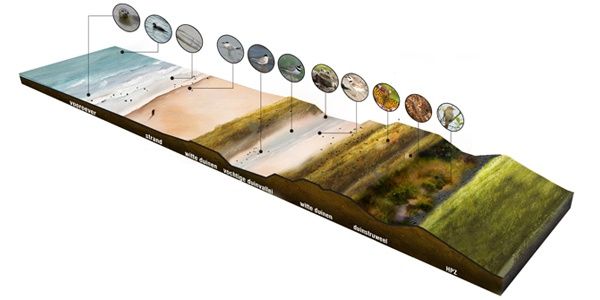 The new dike is designed to protect the area from the sea for the next 50 years. (Illustration by WEST8)

Of course, this technology was hardly foolproof (as evidenced by the repeated flooding), and in 1823 the dikes at Hondsbossche were rebuilt with stone — the first massive modern dike in the Netherlands. In 1977, the stone dike was once again reinforced and raised to new safety standards. Today, those standards have once again been increased, in response to growing threats from global warming. The New Hondsbossche Dunes will implement protections to meet those new standards and soon become one of the strongest defenses along the Dutch coast.

The project is groundbreaking because unlike traditional coastal engineering projects, the New Hondsbossche Dunes not only serve as a pragmatic barrier against the sea, but also strengthen the area’s tourism sector and support biodiversity and native vegetation. The massive amounts of sand dredged from the sea floor and spouted onto the beach will quickly grow into large, “natural” dunes, shaped by wind and water over time, creating a dynamic environment that will become a habitat for rare plants, birds and other animals. The new, wide beaches will encourage tourism and recreational development. According to the office for urban design and landscape architecture behind the project, WEST8, “The design unites a technical solution with a romantic narrative.”

As part of the second national Flood Protection Program, the project also has a role to play in the country’s changing water-management strategy. In contrast to previous dike construction – which was technical above all else – the New Hondsbossche Dunes seem to indicate a shift toward solutions that address not only safety needs, but also local environmental and economic concerns. This clever approach combines public and private interests to create new opportunities while still providing the service that all Dutch citizens have come to expect: better protection from the next flood.